Housing a Pig is the third and final episode in a series of shows curated by Paul McAree, part of a broader project called FLOOD. Its been located around the corner from The Lab and Oonagh Young Gallery in Dublin 1.
The title’s suggestion of actively ‘putting up’ a biblically unclean animal is at once catching and surprising, but primarily a practical concern in more rural parts of this island. Up in the Big Smoke this proposal is meaningful of something certainly allegorical. Traditionally, in Western Europe, the pig has been a symbol of greed and lust. This is perhaps best expressed in George Orwell’s Animal Farm where the corrupted animal leaders (Stalinist bureaucrats) and the human farmers (capitalist ruling class) eventually become indistinguishable. Later in the 1960’s it was popularised as a term for the police (I suppose this is just insulting, as it may always have been). So what of this boar’s dwelling? This curatorial accommodating of swines? 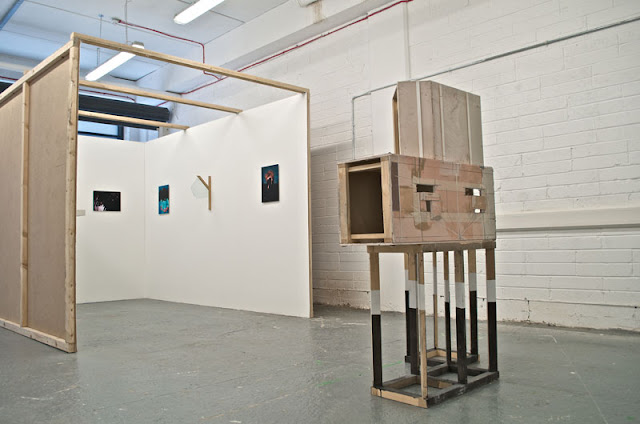 The space itself, Unit 3, should be mentioned here as it precedes this thought. It is a small, barely finished shop unit (reused) on a back street. There is local, pedestrian traffic that rarely seems to draw the art crowd. Its proximity to rougher housing estates leaves the door closed. But it’s this ‘roughness’, the painted block walls and exposed pipes, seated in a new and promising Tiger-era building with large windows, that make the below quotation meaningful. There is even more significance if we look at the FLOOD project at-large. Besides it’s current incarnation they have several books published, a record and a series of posters (including the memorable I will be a phenomenon by Theresa Nanigian, where to participate, one had to email directly and would receive a copy by post).
My curiosity is raised for this exhibition. The show is self-described as:
“Within FLOOD stands a gallery within a gallery – re-purposing a video room from a previous exhibition, rotated and positioned with its back to the entrance, denying the visitor an immediate impression of the exhibition. The room houses 3 artists works, all wall based, while 2 artists sculptures occupy the floor outside the structure. The exhibition seeks to break an easy relationship with the act of viewing and navigating a space, and to question what happens to a work’s autonomy in a thematic gathering of works.”
In the scheme of the things, and particularly within the current debate numerous individual opinions about press releases or gallery texts and their frequent use of ‘international art speak’, this put me on guard. Has too much been revealed? Even Totally Dublin picked up on these ‘White Cube’ structural points in their review. Or is it so bleeding obvious that it’s not even worth allowing any mystery abound? While some may say it’s ridiculous including all this within the gallery information, I feel it’s worth stating. As the idea of the more fixed, traditional and commercial gallery is carefully played with and unfixed, the audience’s perception and access to it does also. I think of it as putting visitors in a privileged position of access upon entry. It becomes a stage set with its back turned. 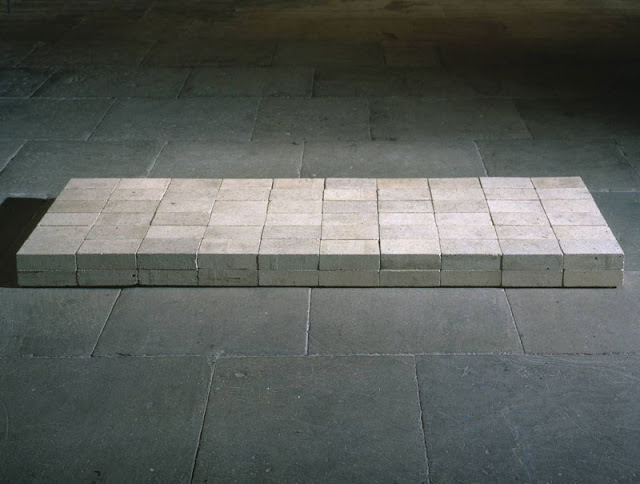 A doormat placed at the entrance and used unconsciously, as we are trained to when entering a home or business, is wiped with countless wet shoes. This first point of contact is actually an artwork, but not actually part of the show. Angst – it has the word ‘angst’ printed on it – is part of an internationally distributed edition of thirty. There is, according to our gallery guide, a reference to Carl Andre’s bricks (Equivalence VIII). While not immediately clear to me, it is, presumably, a formal, loose comparison – lying on the floor and a similar colour. However, my lasting impression is of this wiping away of disquiet, this anxiety. Simple. Physical. Actual. I, sincerely and wholeheartedly, want to wipe it clean from my boots, life and practice. 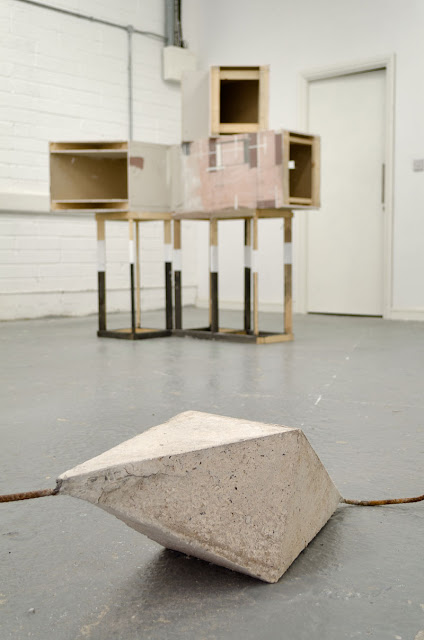 After wiping away or sidestepping Angst we find two works with one title, Constructing the Debris by Keef Winter. In front of the door is a diamond like casting of concrete with a rebar ‘thread’ running through it. It is immediately and consciously reminiscent of one of Constantin Brancusi’s ‘beads’ from his several Infinite or Endless Columns (1918 – 35). Brancusi used this term, ‘beads’, to describe the segments his famous sculptures were comprised from. This is further heightened by the long curving intersection of rebar and concrete. It reminds me, also, of the video animation by Sophie Eagle titled Collapse (Endless Column). Her video features a CGI version of the Romanian artist’s column collapsing repeatedly on a remote desert road. Or also of The “Endless Column”project at the Studio Museum of Harlem. Indeed, the iconic Modernist sculpture is meme-like in today’s art. I can say that having worked with it several times myself. Does Winter’s piece represent another actualisation of this process? 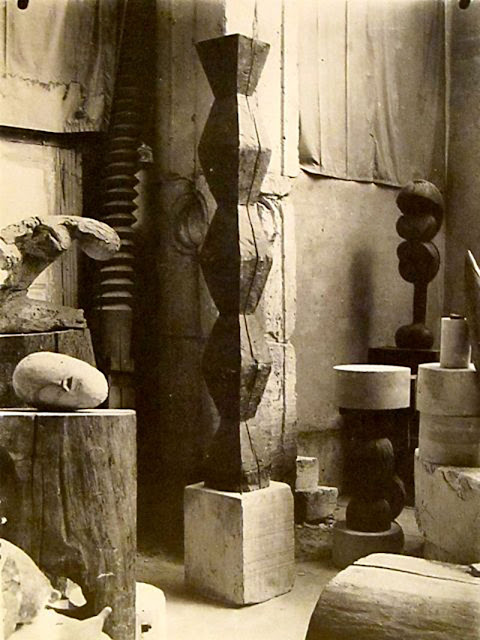 Winter’s accompanying piece, to the left, is less of an apparent construction, as it looks to be real industrial waste; a mangled concrete blob with rebar. It is the less in-tact partner to his cast shape. Perhaps the pair represent failing of the modernist dream, reduced to rubble just as the well-known, short-lived failure of the Pruitt-Igoe housing project in St. Louis. Pruitt-Igoe’s demolition in 1972 has become the short and simple (and symbolic) end to Modernity and ostensibly the beginning of a Post-Modernity. Or maybe Keef offers us another approach, positioning his work on top of the Post-Modernist feedback loop of simulacra, finally exhausted. 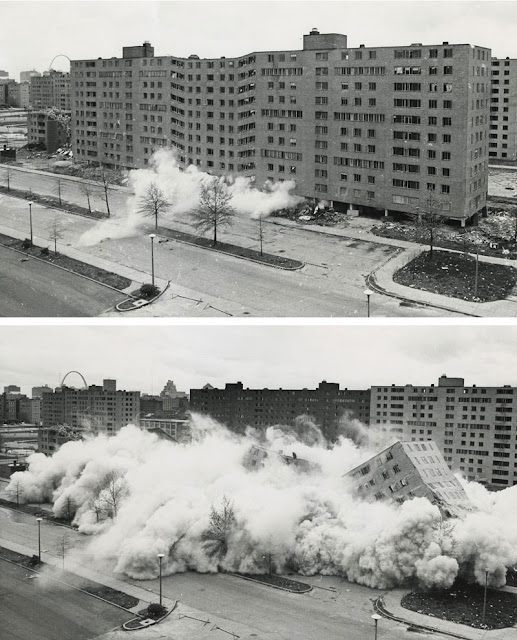 Within the space’s very intentional White Cube gallery are several works by three artists. They are shuffled in their hanging on this space-inside-a-space, set-like facade, so as to diffuse a sense of authorship, creating a sense of curatorial purpose and plan. Concerns of the living interacting with the dead stuff of buildings (I and II), a geometric fragment of safety glass hangs from a custom wooden device/arm/frame by Carla Wright. Cut back to this shape, it may have been from an office window, school or industrial building. A matching ceramic shape provides the second part, a fragile echo construct of the original. Also hung on a matching specialised armature. 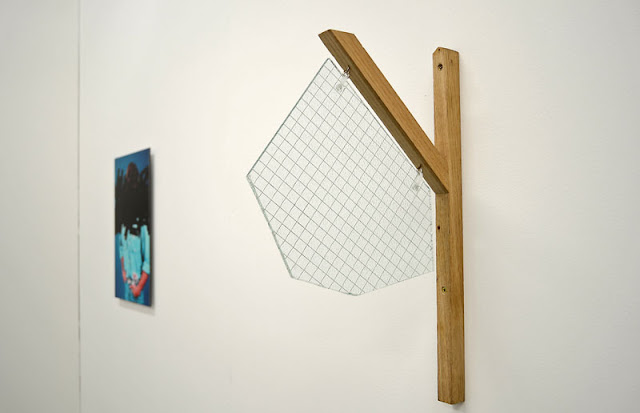 A simple magenta striped paper bag, commonly used for something like sweets or postcards, lies on a shelf. Duet – [Abstract Composition], the work by Jo McGonigle, has its mouth open, and so becomes structural. It appears to be a simple gesture, but nonetheless beautiful – a found object. Upon inspection the top has been overprinted, double-exposed with a new layer of magenta stripes. The original provides a foundation for an imperfect ‘human’ mimetic copy. Layers of the unique and imperfect are impressed upon the machined and infinitely produced.
Similarly overprinted are Jonathan Mayhew’s LLLAYERSSS series. Dated, generic family photos sourced from the internet are stamped repeatedly with layers of the Slayer logo. It is a sort of juvenile rebellion made nearly architectural or even archaeological, like the imposition of angular city offices over millennia-old settlements. Or is it the metaphoric architecture of the nuclear family defaced, like graffiti on a buildings exterior facade? 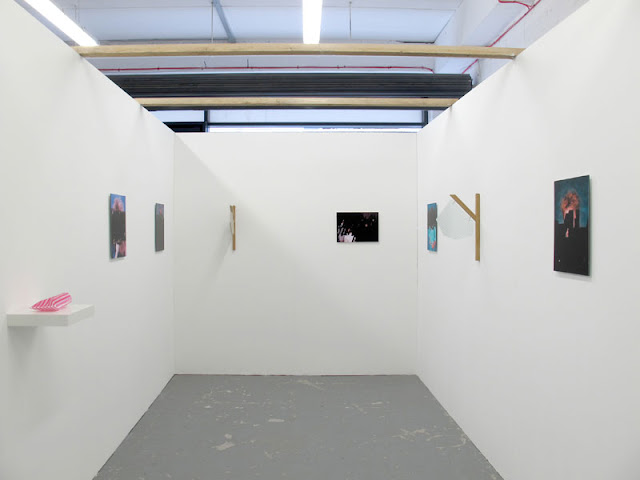 Beyond the white cube, as it were, Neil Carroll offers a wholly free-standing sculpture with, again, clear architectural ties. Between Leaving and a Possible Return, is constructed of drywall and a timber substructure, it is an abstract piece on a referential base. It’s subtly ornamented with markings of stripes, plans, perspectival studies and the like. It appears to be simultaneously in construction and a ruin. There is a clear resonance to Brutalism’s raw materials and boxy angularity. Maybe an early model for Boston’s Government Center or an in–progress maquette of a giant never-constructed Yugoslavian memorial. Yet it also appears to be a cut-away, a fragment of some larger structure, removed and isolated from its parent. 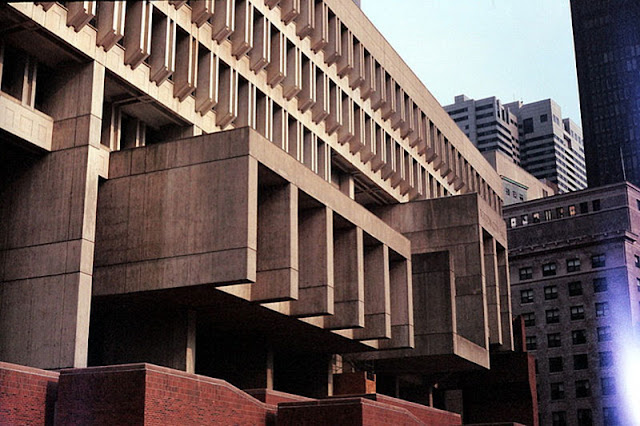 Housing a Pig offers the audience little from the street view window, intentionally disrupting the commercial experience these facades were intended for. It more than makes up for it through extended written explanation and a rich, well curated exhibition. But the elephant in the room may be the tackling of something bigger. Alluded to in the press statement is this challenging of the viewer through the exhibitions physical stance. But is it not more an exploration of the architectural within contemporary art? The oft trodden territory of adolescent–like Post Modernity’s rebellious rejection of the Modern project, with its idealism and purpose, is expanded here. Just as the more current ‘moment’ for the casual nostalgia of Modernist architecture and its utopian–ness is avoided.
There are in fact many layered historical references (some heavy, some less demanding) amongst the chosen works. And while the physical and practical architecture of the shop-front-cum-gallery is challenged in an actual way, the works, when put together, propose various reads on our own perception of constructions both social and physical. All appropriately leave angst behind. I felt, amongst the works, not a worry or fear about the human condition, but a reflective and pioneering strategy, picking up and making up something new with what we have at our collective disposal.
Within FLOOD’s final installment as a ‘gallery’ on James Joyce St, the question of architecture within the sphere of art in a more structural, even philosophical way can be challenged. What will be built or housed next? And if the question of housing is indeed constant and present, I’m left uncertain as to who is the metaphorical ‘pig’, the audience, the artist, the show, or the art world itself?!
Housing a Pig
Neil Carroll, Jonathan Mayhew, Jo McGonigle, Keef Winter, and Carla Wright. Project Board: Peter Lloyd Lewis.
FLOOD
Unit 3, James Joyce Street, Dublin 1
26 April – 27 May 2013
Review by Jim Ricks