“…based upon the medieval Irish myth of Buile Suibhne, or the Frenzy of Sweeney. Cursed to be half-man, half-bird, Sweeney hopped throughout Ireland lamenting his woes in lyrical verse, until he reached a farmhouse in St. Mullins in Co. Carlow where he found a strange form of kindness, – each evening he was invited to drink milk out of a bowl of cowdung…”1 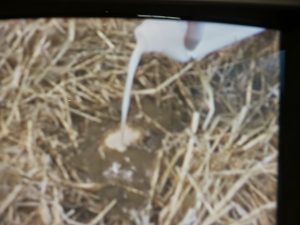 The story of Buile Suibhne is an old epic of the Gaelic tradition. A king who is turned into a birdman at the first sound of a bell is in the end the tragic part.

For The Birds plots the real final resting place of Sweeney. The mythological tale of An Buile Suibhne is reasonably well known. It was used most recently by Irish authors like Paula Meehan and Seamus Heaney to elucidate the ways of modern life. T.S Elliot also used the primary character as inspiration for Sweeney Agonistes: Fragments of an Aristophanic Melodrama. Elliot borrowed his dramatic form from the ancient Greek comic Aristophanes. The point here is that an origin for any story is always a story itself.

British poet T.S.Elliot’s own Sweeney-like character lived in the time between two world wars and his use of a syncopated drum beat echoes the popular influence of jazz music at this time. By extension, the influence of American culture on British behaviour is underlined as a question of moral integrity. This unfinished stage play exposes Elliot’s feelings toward the modern woman and her place within man’s changing world. In Elliot’s version, Sweeney befriends, lives with, and uses the whores of visiting US soldiers. In essence, the tale is one of social change, and in this example the character of its myth is evoked as something contemporary to the age. In this tradition, Lynch’s approach is that of contemporary enquiry. If it should happen that miracles and magic tales are still resonant for us now, how is it that we might live with them as part of our own lives? This is the question that For The Birds asks of the viewer. 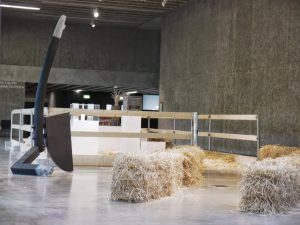 Almost without realising, you might find yourself standing in a livestock enclosure, straw under foot. Beneath a glass table top, pictures of previous work by Tom Fitzgerald suggest an ongoing interest in the Sweeney tale. In addition, we are given the milk and the footprint which hollows out a cup in cow shit. Hot and steaming in its original state, this single pat of dung and its surrounding straw has now been confined to a glass box on top of a plinth. The gallery setting means that lights glare back as you near. Inside the box, it is of course the same shit left by the cow we see in a video playing adjacent. The video is a short grainy thing, starring two cows of visibly different states of maturity. Although we never see this shit fall, the video briefly shows us that a cow and her calf were in the gallery. 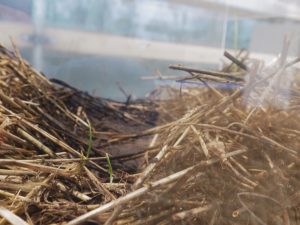 Marked out according to modern farming practice, the polished concrete floor remains visible beneath the straw. The plastic milk carton housed in a second glass box has been emptied. The short video shows us a hand pouring the contents of this carton onto the shit where it fell. Three months after the show opened green shoots have also made an appearance inside this box. 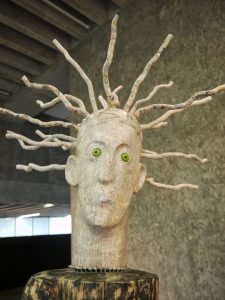 Outside of the provided holding a figure stands watch. This figure is constructed as an amorphous form of wood and brass tacks and paint and papier-mache and buttons. At the far end of this almost manger-like setting, again outside the enclosure, another figure stands tall. This second figure possesses no exact human form. Even so, the pieces of carved wood which make it stand at roughly 8 feet propose an instrument. The metal wire which strings its figurative bow is held firm, illustrating tension as part of its make up. Like a scythe or the sharp lines of a crow’s wing, its blackness cuts the rows of straw which serve to usher in and out both the livestock and the art viewer.
Around the 16th century Irish families began to anglicise their surnames. This was done in order to gain favour with the English landlords. It left Sweeney, a name born of the Scots-Gaelic heritage, forced into the now more familiar Sweeney. The irony of this is perhaps best reflected by the plastic milk carton, which, along with the metal brackets used to brace the wood fence of the enclosure, all call to mind the tendency of technology to universalise the making process. Rather than a wooden pale or a basin made from an old bath, there is a thermoset plastic mould of something reflecting an industry and marketplace no longer about subsistence farming.
The story goes that when Sweeney was tired and truly maddened by his perpetual flight he found in his final days a homestead and scullery maid willing to feed him the milk he needed to survive. The story’s end sees him become the victim of a jealous husband who liked none too much his wife attending to such a disreputable figure, mythic or otherwise. This man’s spear resolved the wish and word of St. Ronan who set into motion the whole story that is An Buile Suibhne. In the story, when the saint hung his church bell in the once peaceful homeland of King Sweeney, he received protest from the King regards the noise. The saint then sent his religious followers to deal with Sweeney’s protest. Things escalated, prompting the saint’s curse that Sweeney be driven mad as neither bird nor man. This saint and the actions which he set down offer to us a simple division between the ages, exemplifying the many social shifts which occurred as a result of the arrival of Christianity.
While For the Birds is a collaborative offering from two men, it is in the gallery room next door that we see Lynch’s own blend of archive, artifact and media resolve as a model of cultural critique. In this room a number of proposals have been made by Lynch. The first comes in the title: A Church Without a Steeple. An accompanying slide show reveals to us the actual church built without a steeple yet the objects in the room provide a sense that the connections being explored are at least partly philosophical in nature. 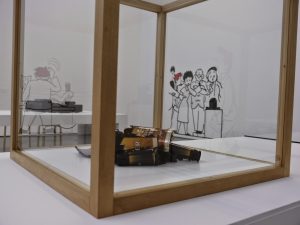 A glass box with wooden frame contains clustered pieces of broken bottle. Is that art? Is it even interesting? Where is Duchamp’s famed bottle-rack now? Another plinth displays a pairing of paper coffee cups left next to an intricately made wooden apparatus. On four walls are cartoon depictions of people looking at art. These characters come directly out of a 1950’s comic book series called The Looney’s. Their creator, Seamus O’Doherty, also did strips for The Dandy and The Evening Press when both were still in wide circulation. Along with their role as archive material, the cartoon figures stand ever present as an enquiry, speculating whether Lynch has in fact used them to centre his argument as primarily a cultural question.
In the slideshow and provided audio commentary we are told amongst other things, the story of a man who enters a gallery and takes off his hat. As he walks around he looks and questions the artworks on the basis of perceived difficulty or even function. He hears a sound of quiet awe and he follows it back to a group of interested spectators who have come across this fine and very interesting bowler hat. They refer to the creative act of bravery: to place a hat on a plinth and call it art – and they rejoice in the unfailing qualities of the human spirit. The man then picks up the hat and tells them he must take away their masterpiece as it is in fact his very own hat. In this tale a practical line is drawn through the interpreted subject and we begin to see the gaps which exist between individuals as a result of their differing knowledge sets. Of course western culture must always reflect the extent of these differences as the precondition of a democratic society. The humour of O’Doherty’s tale is found in the possible awareness of both sets of knowledge. In the end we are left to question whether the man was wearing a hat or did he in fact exit from the gallery with art on his head.

For The Birds takes a more hands-on approach to the life of a story, helped largely by Tom Fitzgerald’s figures. These works exist to describe the characters significant to the final days of Sweeney. The black wood with painted white tips and a jutting leg all symbolise that final act. Sweeney with a pitchfork deep in his ribs, and the thrusting arm of the milk maid’s husband reinforced by the jealousy this man felt – stand here in a single form. 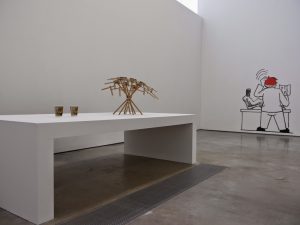 The daily pages of a contemporary newspaper make up the outstanding hairs of Fitzgerald’s other work. This figure stares back as one staggering and frightful totem. Even so, it takes on a human scale, playing its part in the same way that we as viewers entertain such questions as is it art. In truth this work was made by a man of our time, but it’s figure appears to see something of our future in its beady green eyes. Apart from these eyes, expression comes to us on the torn strips of paper which cover the hair and face. These daily news stories act as an archive material, situating this figure as grounded in our world, and suggest also that whatever this figure has to say we may already know.

As with the exiled Sweeney who was forced to migrate perpetually, the indigenous Irish culture has been laying claim to the land ever since the arrival of what were seen as opposing cultures and techniques. Sweeney eventually found succor and sustenance in the home of a sympathetic man and his staff. Perhaps sentiment played a part in the old man’s kindness, but with Sweeney’s death came the inevitable transition from the symbol of man and nature to the Christian model of man and god. 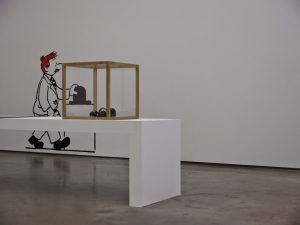 The question of is it a hat or is it art is a joke about the mistaken roles we subscribe to dead things. It would seem the same for shit in a box as for religious artefacts or symbols. But it is Lynch’s use of the Sweeney story which suggests a broader narrative about acceptance, adaptation and the expression of loss. 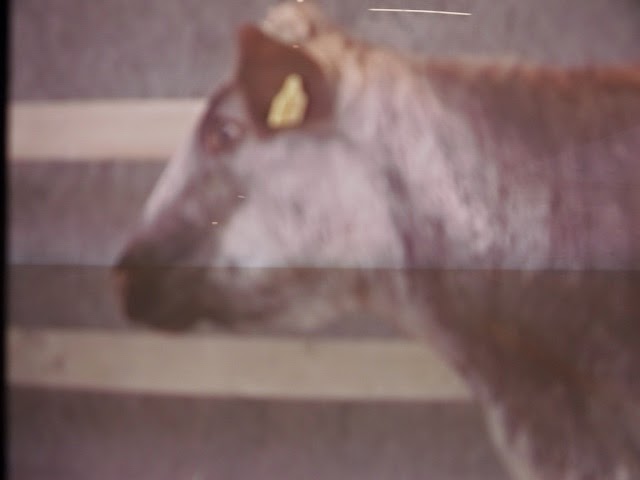 1 From the exhibition press release.