The title, What Is And What Might Be, suggests an assessment of the here and now, and its potentials; the future and the plans to get there. And although the curators state that Lacan’s reference to Holbein’s distorted skull is their conceptual starting point, I’m not sure this matters in lieu of the ideas the actual experience provoked. 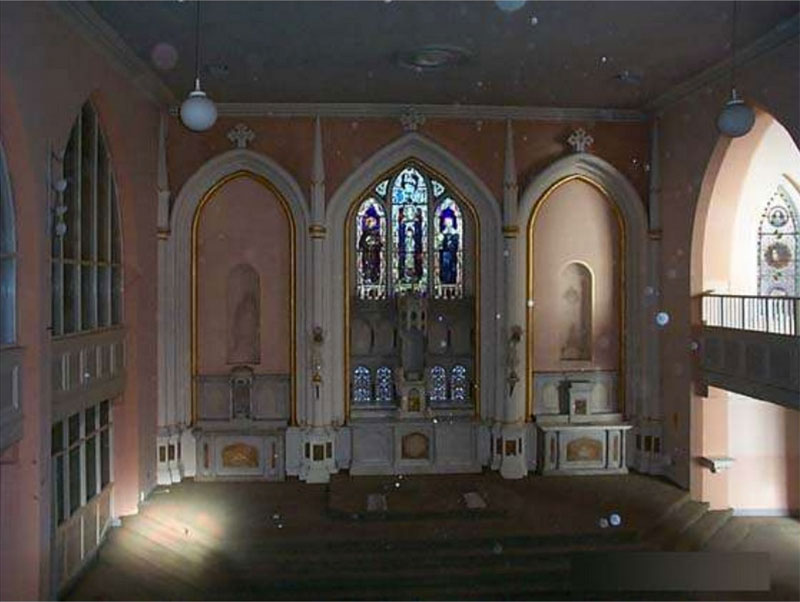 A painting show, the selection of works and their organisation in this particular space pulled at and unpacked ideas to me primarily architectural. In both a literal regard of the built environment, and in the sense of blueprinting, but also in the construction of ideas and meaning through art.

Intentional or subconscious, this may be prompted by the exhibition space itself, a former Franciscan church. The building, an 18th century church, was gifted to Drogheda after the religious order had occupied that spot for nearly 800 years. At the top of the room rising two full stories is the old alter. Ornate, monumental, gothic, chaste, and gilted. It dominates the space and may normally prove a cumbersome reminder of the buildings non-neutrality of religious design and historical function.

The building’s entrance off the streets of central Drogheda leaves me on the balcony level with their impressive municipal collection. What Is And What Might Be is in the Lower Gallery and Irish Cement Room and is accessible via a small original side staircase. The first point of contact is Highlanes, a mural by Miranda Blennerhasset at the top of these. Her deep red wall painting is pinched into the corner. Simple geometric shapes interlock, calling to mind a simplified M.C. Escher. 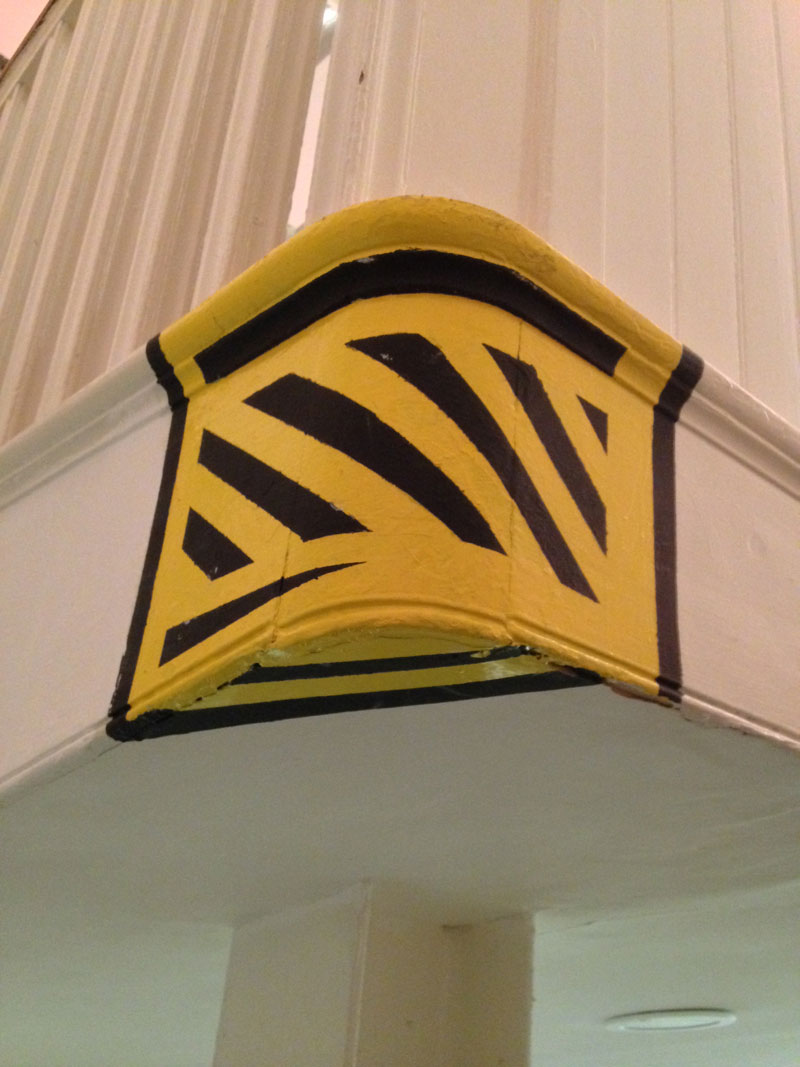 Another wall painting catches my attention midway down the stairs. It is a graphic warning to watch your head. Black stripes on yellow, it wraps around a curved architectural protrusion midway down the stairs, at their bend. Hand made, it is painted in situ as demonstrated by an additional ‘filler’ black wedge stripe. No doubt this has always been here, but I hesitate after viewing Miranda’s work. 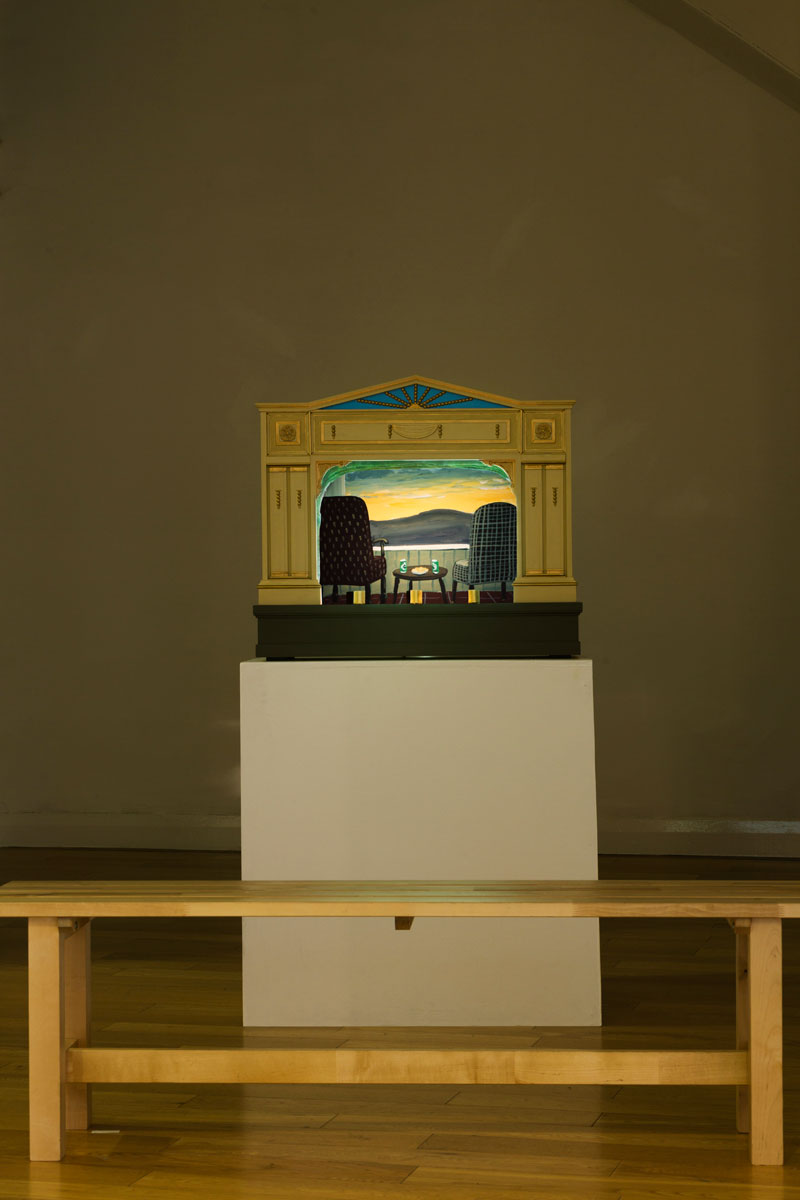 Andrew Vickery’s piece Arcades Ambo is a small theatrical edifice; a miniature temple of classical style. The maquette has a rear projected slide show for its backdrop comprised of transparency film documentation of his paintings. The structure itself is foregrounded before his work, highlighting the experience of being an audience and the entertainment of painting, but also allowing an entire body of work to be viewed in one sitting. Thus the individual paintings take on a collective narrative, although I sense companionship, even a couple, I am not able to read much more into it (all empty pairs?).  Directly simple, ‘happy’, bucolic, even nostalgic, four of the original paintings are shown to the side. 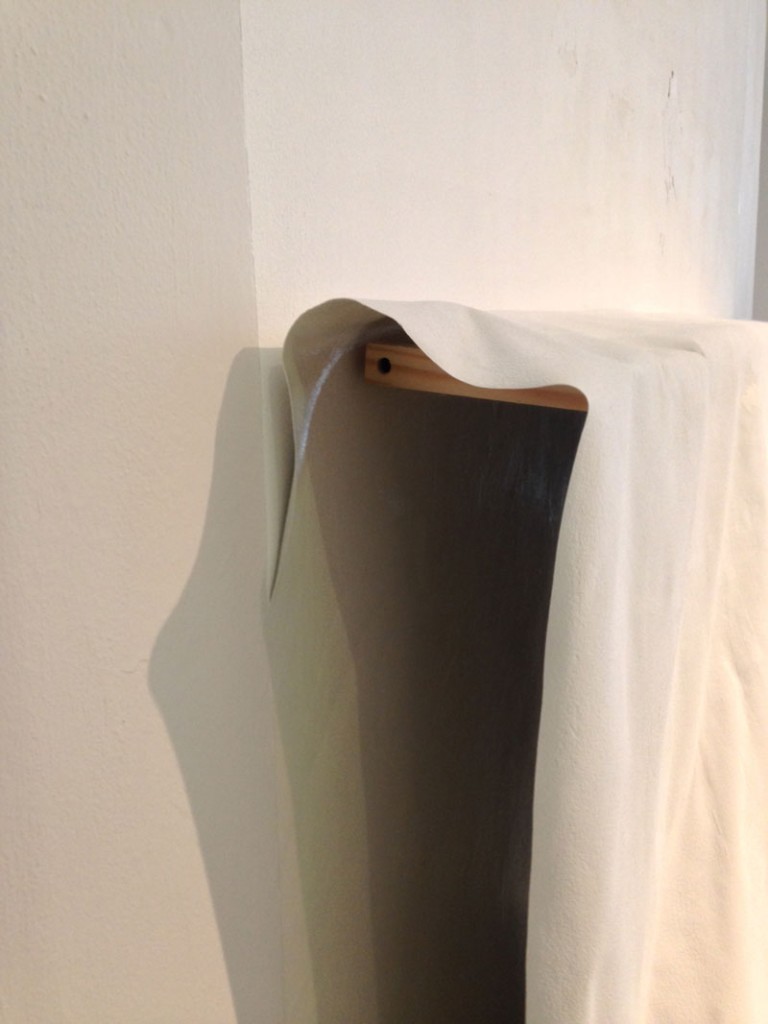 Susan Connolly’s quizzically colour-theory titled piece, Y, M, C, C, Y, M, M, C, Y, YMCCYMMCY, YMC, CYM, MCY, gives the appearance of the physical deconstruction of the building. I am unclear how this was made and this adds to the work’s significance. Aidan Dunne of The Irish Times writes about it: “It’s a visual conundrum worthy of the dialogue with Holbein that the curators have in mind.” Like other recent work by the artist, it involves a peeled surface. But here the surface is the gallery/church wall itself and without ornament or artistic embellishment. It is not clear, but appears to be painted wallpaper carefully pulled back intact and draped over a shelf and onto the floor. Leaving a long unseen undersurface exposed, or did it? A sort of archaeological dig into the architecture. 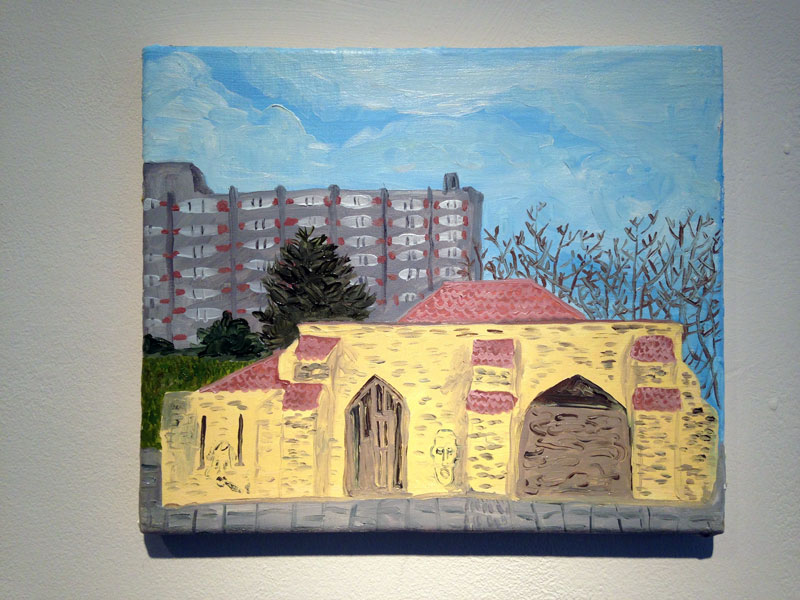 Kathy Tynan shows two paintings, both of inner city buildings. The subjects are universal, or international rather. The larger of the two, In the Sun, allows us a peer over a grey wall to a path with a long receding strip of council-built brick housing: The Flats. Or projects, as I call them back home. Curtains alternate with blocked out windows and vacant-looking ones. Fat cherry blossoms contrast. The sky generously fills the upper half. The institutional nature of these blocky structures is immediately apparent and I’m guessing are of the Dolphin’s Barn area along the Grand Canal. But also, the Pruitt–Igoe buildings in St. Louis and their famous symbolic destruction come to mind. The controlled demolition of those boxy Modernist structures heralded a less assured, less linear, less monist, thinking we now call Post-Modernism. Accompanying this row of brick state-funded accommodation is a smaller piece, Desecrated Temple of Jane. This is centred around a small muddy yellow building in the foreground completed with amateurish graffiti of a silly face. It looks to me like a much modified grotto fragment. Unremarkable brown flats appear in the background. She paints with a knowing naivety, an art insider striving to capture the immediacy and honesty of an outsider. 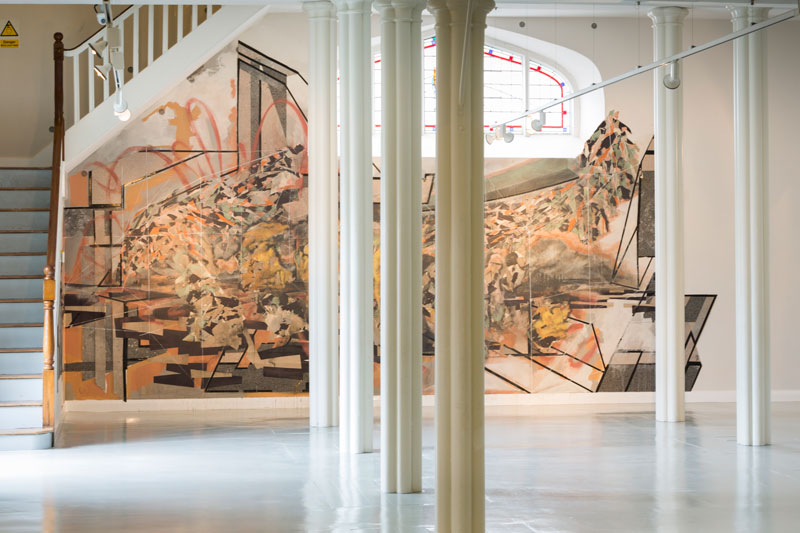 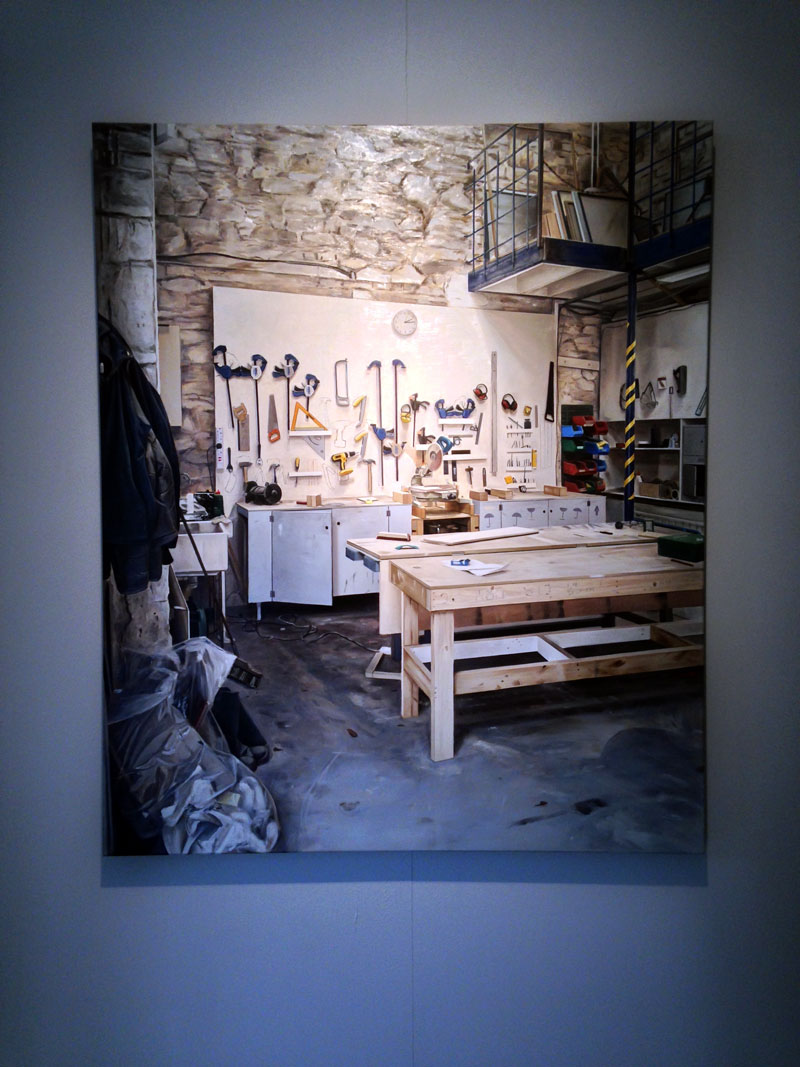 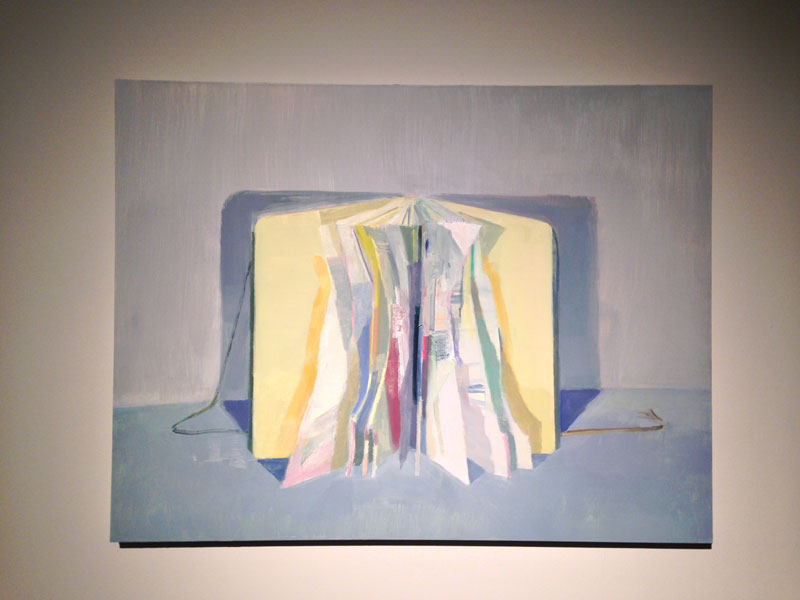 Opposite the alter on the far back wall is Neil Carroll’s mixed media mural, How many is a million?  Linoleum collage and paint, it is brutal futurist baroque with a direct affront to the perspectival plane. Through this fragmentation and human-like gestural figures, it offers a reprise to the alter. Workshop with clock, one of Kevin Cosgrove’s longterm workshop series. It, like the many others, is a high renaissance painterly approach to the gender constructed uber-masculine spaces of work or hobby. Cosgrove is an inspiring and systematic worker in his own right. And the construction of these paintings is no small task, as all aspects are manipulated and constructed to his final liking and vision. A singular painting by Mairead O’hEocha of an upright open sketchbook or Diary is an open book to the work processes of art making and planning itself. 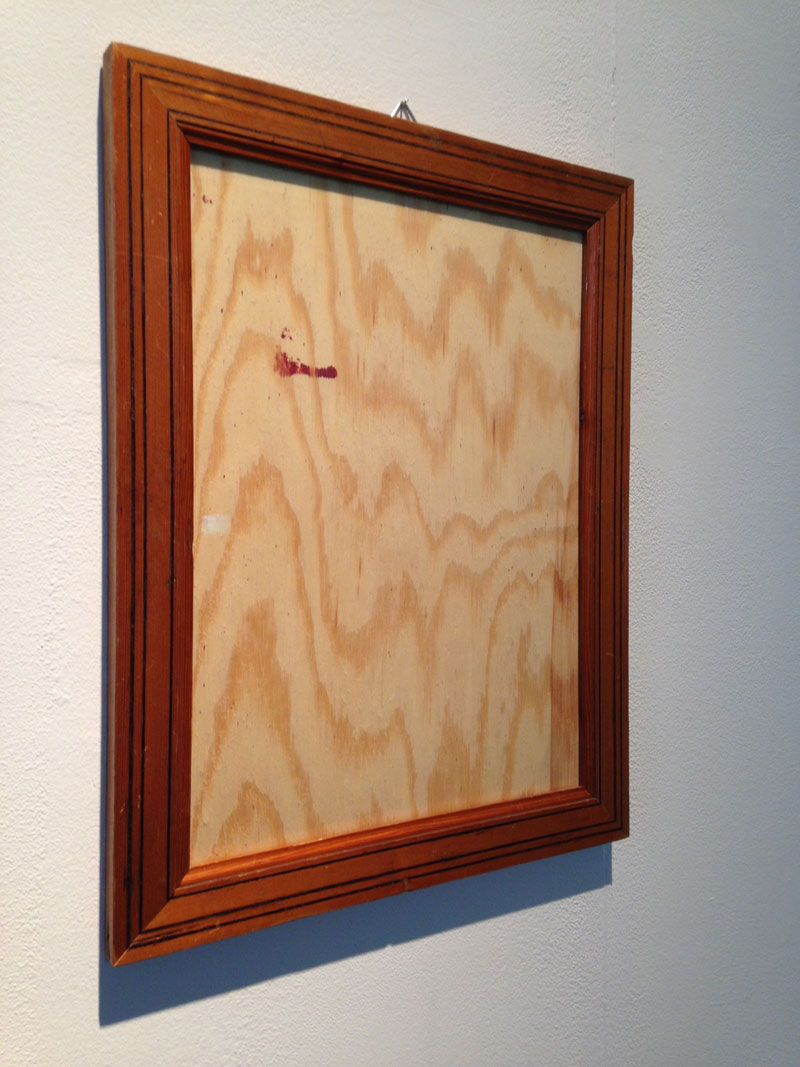 Fergus Feehily’s Cloud (reprise) is probably an entirely found object, although it is not explicit. A framed piece of plywood with a dash of paint, it is more akin to photography in its selection and framing. Yet maintains a Duchampian ode to our contemporary materiality of construction: the hoarding, the cheap build, the understructure, or structure from which a building is framed and an exhibition may be hung. Super jokey, yet another buttress in the curatorial architectural argument becomes present. 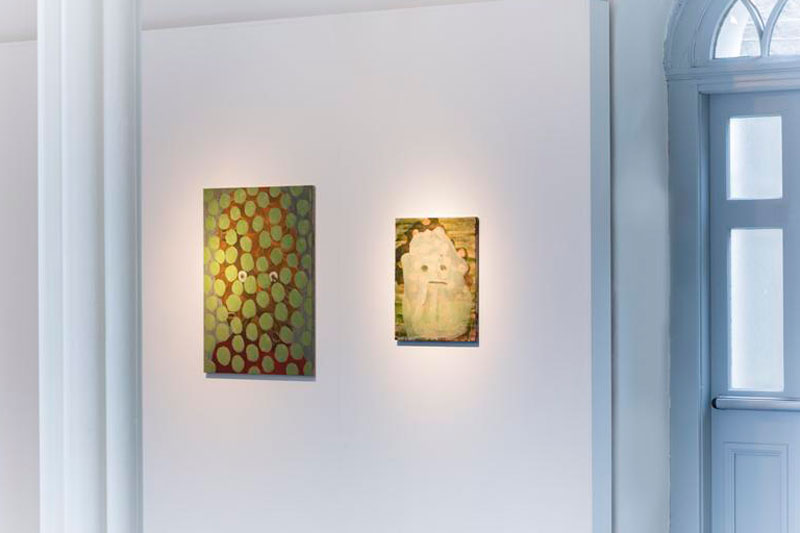 Kevin Mooney’s layered paintings, Pipes and Little Ghost, utilise childlike playfulness and techniques. Building up to create ambiguous meanings. Eyes peer through a cage-like framework, and a ‘bag’ is anthropomorphosised. The two serve to dwell on a method of construction within painting. But I can’t fight off the lingering thought that these pieces are the ‘odd man out’ and don’t fit as neatly into the exhibition’s framework. 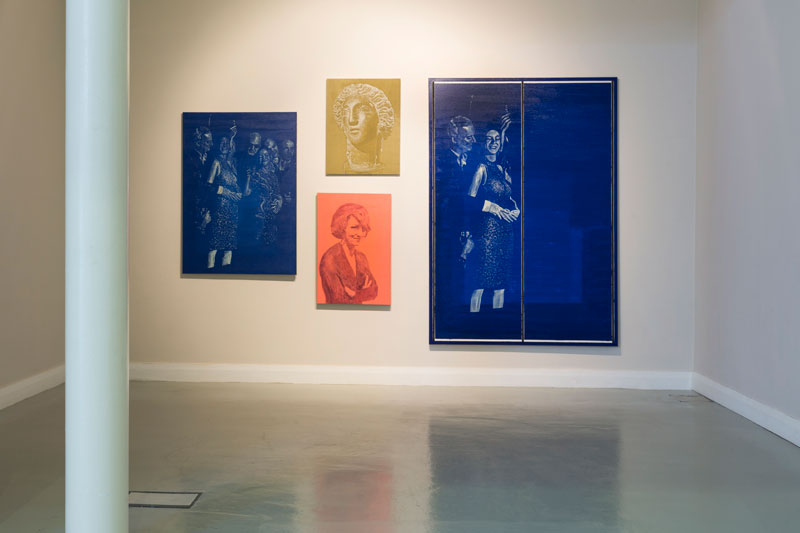 Mark O’Kelly’s paintings in Strauss-Kahn are an essay in systems construction and the art of suggestion. Set aside in their own niche, the series is comprised of four individual paintings. The first and last are variations of the same image, a couple at a formal dance, both deep blue with white linear overlay, like a blueprint. The last larger and more reduced, with only the couple in it. The central two are stacked and stand out with warmer backgrounds. One is a Classical sculpture of a female face, the type of image that is archival historicity; a slide from a community college art history class. The one below: a mid century middle aged woman poses with arms folded. Methodically painted, your eyes scan the series as if there is a glitch. Looping back over the repeating image and arcane data from another era. O’Kelly pushes towards an archaeology of thought. You are left searching and reading, looking , waiting for meaning in the figures’s body language and expressions, in their dress. But waiting. The pinwheel of death. The title of this work pushes further. It is named after Dominique Strauss-Kahn, the former managing directer of the IMF. He resigned in 2011 after being accused of sexually assaulting his hotel maid in New York City. 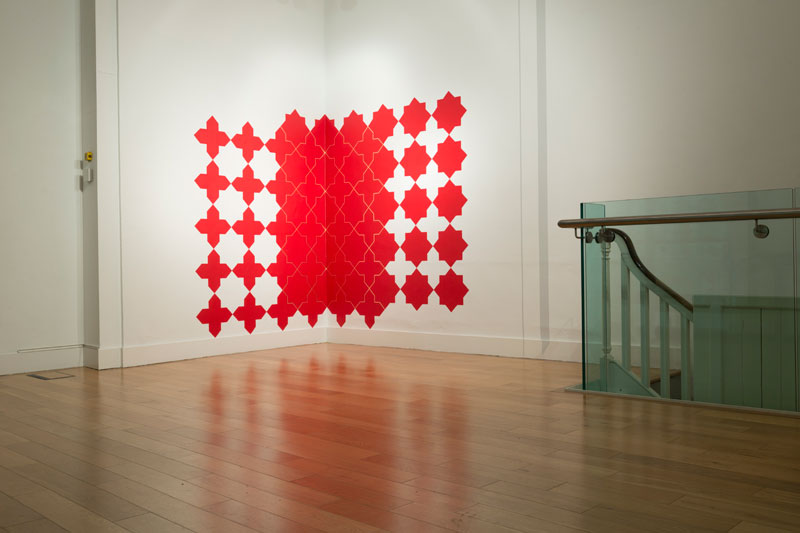 Exiting up the stairs, I pass Miranda Blennerhassett’s in situ wall painting again. Reading right to left and back again the shapes compose each other and fall out; positive and negative space forming more complex geometric combinations. Crosses proceed as solid and become negative space for stars. Islamic architectural ornament is a reference point, but not exclusively so, its construction transcends any specific culture or system.

The show is widely varied even though it is entirely painting and serves to provide a micro survey of contemporary Irish painting. It is thought provoking and has staying power. Co-curated by three, it looks on paper like it could be a horse designed by committee, but the results are persuasive and compelling. What I saw was a cleverly selected exhibition that handled a loaded space with finesse, an exhibition that read as a unified whole and dealt with a range of issues around the architecture of art and thought, and of architecture itself.