I’ve seen your bravery and I will follow you there

Linda Quinlan
Galway Arts Centre
June 6 – July 5, 2008
by Frank Brannigan
Curator and critic Joseph R. Wolin describes Linda Quinlan’s work as “an ensemble of exquisite and precisely calibrated contingency” in the exhibition’s accompanying essay. The challenging range of work in the exhibition: watercolours, assemblage sculpture, photographs and video are elegantly if not sparsely laid out with the implicit intention to give much contemplative space to each piece. Upon entering the space, you sense that you are expected to attend with acute sensitivity to each piece, or miss a clue to the great mystery at hand.
The sculptures are peculiar, even esoteric. In the first room, a long brass rod leans obtusely from the floor to wall. It delicately balances a ‘coat hanger’, which in turn dangles a Nigerian Bakelite necklace, propped against a patch of rabbit fur (echoes of Rauschenberg’s flag series?) The piece is titled I don’t think they’ll ever catch us; I’m still trying to figure out what it means. Its purposeful placements allude to a lost meaning of some symbol or tool that had once belonged to some remote tribe or community that has surely become extinct. Belatedly, the piece makes sense in the context of We Forget to Write the End, where Quinlan refers to modern Tasmanian aboriginal culture’s attempts to reconstruct its ancestry, of which there is no written record. But alone it is a thing whose worth is based on the scarcity and obscurity of its materials. The necklace is recycled plastic so that its value contrasts with that of the brass, yet its commonness is negated by its African hand craftsmanship.
Also on the ground floor is a dual video projection, in the fashionable mode of presentation in Dublin today: two freestanding wood panels on the floor serving as screens. On the left is a fairly static shot of a large pin-hole camera, on the right a view from inside the camera. I’ve seen your bravery and I will follow you there is a ten-minute, elliptically titled product of Quinlan’s recent Tasmanian residency. Having been unable to view a passing comet during her time in the Southern Hemisphere, she decided to recreate its journey through the night skies with a smoke-filled pinhole camera, documenting the elusiveness of perceiving such an experience.
Upstairs a piece of white leather, cut to resemble an animal skin-cum-throw rug, lies under a brass pair of legs holding what appears to be a small charcoal grill. Is this an abstracted, mutated micro-installation of quasi colonialist hobbies? Again, the peculiarity of the materials limits access to the piece; the viewer is left scratching their head at the strangeness of it all. 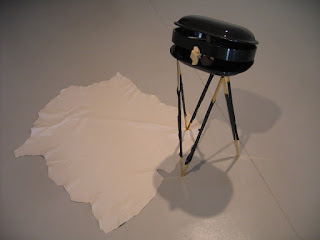 The enigma is amplified elsewhere. One room is devoted to two delicate works (Things surround us) and a work of capably rendered flowers in a vase (I can hardly sit still). It is only upon reading Quinlin’s AIB funded book that it is discovered the flower watercolour is a found, or rather bought, object from a charity shop. Their titles are the meaning, but the paintings, like the sculptures, are negligible in themselves, despite their finicky installation. The found watercolour, for example, is positioned on a strange mirror-coated shelf that forms a m-like shape; why? 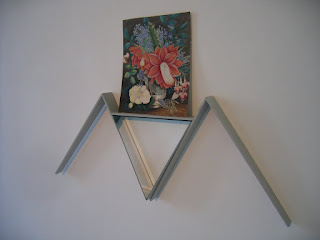 Some of these mysteries are explained by what becomes the conceptual centerpiece of the entire show, the video We Forgot to Write the End and accompanying framed works. Filmed during Quinlan’s 2007 residency in Tasmania, this beautifully quiet and eerie video is set on the grounds of the now derelict Beaumaris Zoo in Tasmania, where the last known thylacine (a carnivorous marsupial known as the Tasmanian tiger as it turns out) died in 1936. Onscreen a dog noses around plants, a building covered in graffiti, and a brook, sniffing out, with its incredible sense of smell, the evidence that humans can’t smell, the smells of what happened six minutes, hours, even decades ago, to a soundtrack of traffic and cackling birds. History is, so to speak, going to the dogs. The projection is positioned where real-time light cast by the window in the other room falls, the image of the dog as protagonist is already fading; history is fading by the time we attempt to recover it. As Quinlan wonders at the end of the video: how does one interpret and recreate something that no longer exists? How do you reconstruct an existence when no record remains? Can you only track the effort of finding what is already irrecoverable, and is the effort enough? Is the research the only compensation available?
Off to one, much darker, side of the room are two framed letters. In the tone of a dissertation, Quinlan corresponds with the Berlin Zoo regarding the thylacine. The response reveals that World War Two destroyed most records in Berlin, so that only a sole photo remains. Nearby, a photo of the current state of the thylacine’s enclosure is reproduced, but also shown in the darkness, so that you have to squint at it in the wan light cast by the video. To place these documents in the dark seems to contradict the artist’s project of recovering and retrieving the thylacine’s memory from the periphery of universal consciousness. Yet, this may be a literal obscuring of information to highlight these unseen and unknown histories of a now lost species. The intentionality of these placements remains unclear, as well as whatever connections Quinlan may have intended between this and many of the show’s other pieces. Regardless, this room stands out as a thoughtfully researched work that touches on a myriad of historical and contemporary issues concerning an animal that assumes almost mythical proportions through the work. 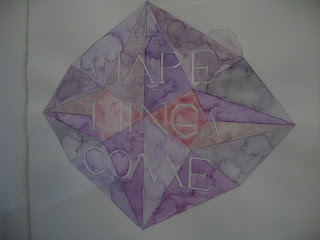 On the second floor is a silver faux leather rug and a set of drawings with titles like The Shape of Things to Come and The Lazer Odyssey, but their subjects are vague, abstract, distracted. The Shape of Reason suggests the building of some thing via a mix of abstract shapes, from which one discerns a metallic hand and arm. The materials of Lazer Odyssey include glow-in-the-dark paint and silver paper. While the intention is no doubt to convey a sense of the excruciatingly researched and precisely executed, the result is off-putting.
The show is troubled by coyness and a penchant for the cryptic in the titles, in the preciousness of materiality and in the sparseness of it all. In the end, these are well-crafted and stylistically very ‘now’ works, but most do not contribute a political context as the most prominent, intellectually engaged piece in the show does. Their supplementary and overly subjective nature is all too evident, skirting whatever political and economic material the disappearance of the thylacine raised.