“Accumulations is an exhibition of sculpture and drawing that have been produced through the labour intensive accumulation of simple elements. The sense of growth of the work over a period of time is essential”

It seems apt to observe this exhibition at 126, which is situated within the matrix of an industrial estate from whose stark utilitarian wholesale outlets, garages, warehouses, machine shops, etc. the artist may have plucked his found materials. The unplanned building in this working-class outskirt of Galway may well have provided an ethic or inspiration for Niall de Buitléar’s exhibit. The use of cardboard and other quotidian materials might well recall the work of Thomas Hirschhorn, who needless to say, is very much in favour today amongst students. However Hirschhorn is not on de Buitléar’s mind, in fact, quite the contrary: this and past work reveal a preoccupation with strong monochromatic colors and the simple, even minimalist shapes; he is not interested in ‘making art politically’, nor consistently in the social or environmental dimensions of material. A more thorough reading of the press release reveals that the artist is intent on creating structures that are suggestive of such organic structures as cells, fungi, landscapes, etc., by allowing shapes taken from urban detritus to accumulate. Material will direct form.

The space is sparsely laid out and a minimal aesthetic determines our negotiation of this white cube. Cardboard and plastic sculptures inhabit the centre, while detailed drawings hold the walls. Mesh (1) and Mesh (2) are large pencil drawings on paper. Comprised of hundreds of tiny quadrangular markings, they are reminiscent of a sheet of meshed metal or even a computer-generated topographical map. The final ambiguous image works well in the context of the show. The patient buildup of the markings reveal something new to us and presumably to the artist.

In one corner, a rounded growth constructed from cardboard strips juts out from a hole in a brown plastic bottle crate, like a very bold, very big Dada mushroom that has somehow managed to root itself and flourish in an unusual place. In the centre of the floor, one observes the small triangular sculpture of woven cable ties (Untitled). Painstakingly created–but is it necessarily organic? Nonetheless, both sculptures are aesthetically striking in their simplicity of form and materials.

Honeycomb, two large drawings, both pencil on paper, consist of tiny ‘honeycomb’ hexagons bunched within a circle, some touching, others not, that collect into organic shapes. Although a beehive is not of a pre-processed material, de Buitléar is obviously attracted to the inherent beauty of its natural geometry. Symbolist writer and ardent bee-keeper Maurice Maeterlinck describes the honeycomb as such: “From the height of a dome more colossal than that of St. Peter’s at Rome, waxen walls descend to the ground, balanced in the void and the darkness; gigantic and manifold, vertical and parallel geometric constructions, to which, for relative precision, audacity, and vastness, no human structure is comparable.” But I must ask, what is a honeycomb but the accumulated material residue of complex social interactions? These drawings are an experiment that is not really an experiment, manipulated by the artist in his forethought to draw a circle from within which he could proceed. Again, form preoccupies him, and not the observation of an unpredictable, digressive, messy and potentially sublime process.

Of the entire show, it is the cardboard sculptures (both untitled) that create a sense of drama and intrigue. Mounted on the wall is a rectangular construction of squares piled at various heights, so that you have the sense of looking down at buildings as if through a primitive version of Google Earth. Another construction, set on a bare wood frame of a plinth, consists of small cardboard squares that have been angled and symmetrically shingled so that the corners peak; it resembles a model of a cross-section of a sine wave or an upside-down Gaudi-esque parabolic cross-vault, if you will. Each object’s attractiveness stems from its form’s suggestibility; they have that familiarity of something known yet seen from afar, of something that could be nominally described as city or wave.

The Berlin Drawings continue along the same lines and contribute to the sense that the artist is obsessed with geometry, with the pure form. Fourteen A4-sized sheets are pinned on the wall in two, evenly divided rows of drawings which consist of shapes you might observe on a construction site at microscopic, even claustrophobic detail. This is a minutely observed world, where a thing is seen so closely that that you cannot see the structure within which it was contained, as well as the economy and history that had produced it. Some are linear cross-sections and others are dots, but most are comprised of squares. The Berlin Drawings’ grid-like arraignment and compositions of little squares refer directly to the cardboard sculptures, but in comparison they come off as sketches, rather than finished work. Some of the drawings are repetitive and others have erased, but still visible guidelines which indicate that, in this instance, de Buitléar is guilty of not trusting his idea.

“The sculptures use pre-processed materials; the artist is interested in their transformative potential. Central to the sculpture are the relationships that are formed between the found material, the processes of construction, and the resulting forms.”

For me, this statement brings to mind Doris Salcedo’s outdoor installation for the 2003 Istanbul Biennial, when she stacked fifteen hundred-odd wooden chairs between buildings. Although working from a different conceptual starting point, the piece is fascinating for formal reasons alone. It also exhibits an astounding level of accrual, fifteen hundred anything is a lot. In Accumulations, while dependent on basic found materials and shapes, not just anything goes. Despite de Buitléar’s process-based thesis, he relies on a fundamentally minimalist and formal aesthetic to guide him. He subjugates his experiments to the laws of form as he has interpreted them, taking out the unpredictable in favour of what he has already pre-envisioned. Thus de Builtear’s preoccupation with formalism distracts him from his concept and his work shares ground with the pure forms of corporate-sponsored public sculpture, differing only in his use of ‘low’ materials.

This is not to say the work is unsuccessful, just not true to its claims. Accumulations is a thoughtful and (overly) careful exhibition, that demonstrates a keen eye for contemporary art practice. de Buitléar is embarking on other ambitious projects; his Till Rolls at The Lab was low-key and surprising. His collections, whether taken from library books or from the city’s streets, yield an unique and subtle way of looking at people. However, the successful modus operandi in these works stems from the moderation he demonstrated. In Accumulations the pre-conceived form tends to dictate material, rather than vice versa, and what was possible is only tantalizingly suggested.

The most successful drawings show a patience and authenticity or liberating honesty of idea and technique. When his sculptures surprise, whether in material or form, we glimpse the spirit of Arte Povera. With links to Dada, Arte Povera has been described as a “laboratory situation in which any theoretical basis was rejected in favour of a complete openness toward materials and processes.” The movement emerged in such cities as Rome and Turin just as the Italian economic miracle of the immediate post-war years collapsed into a chaos of economic and political instability. Is it premature to suggest that a similar movement may develop in post-Celtic Tiger Ireland? 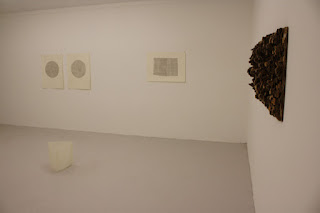 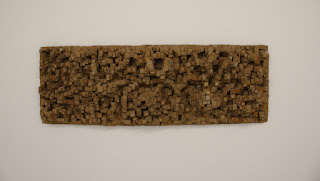 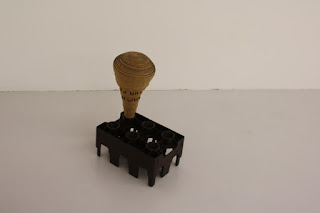