TULCA, Galway’s annual visual arts festival, usually a time of great excitement in the shortening days of November, was an occasion for disappointment in 2008. The curatorial decisions were bold, but fundamentally conservative, despite a few interesting choices. 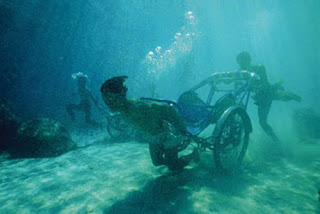 I had initially assumed that TULCA was a critique of I-Podism (i.e. the super-saturation of images, videos, and music via such technologies as the I-Pod in a period of globalalised capitalism). According to curator George Bolster “the curator acts as a visual DJ, representing mix-tapes of separate areas of interest within contemporary practice.” But if curators are DJs, does that mean they are merely entertainers, shapers of popular taste, rather than arbiters of ideas?

The main exhibit at Merchants Road was titled Shuffle, but under the conceptual dressing of this edgy title was scant substance. TULCA, instead of presenting sharp-eyed analysis, or sticking to a bold, if not dangerous, curatorial strategy, turned into an uncritical exercise in “cultural promiscuity in the age of consumption.” TULCA is apparently for Bolster a “temporary storage device”, like an I-Pod; it “[reflects] the way we enjoy art in the same way that we enjoy music.” The notion of criticality has been conspicuously avoided in the pursuit of entertainment, circumventing the possibility of an alternative imagining of cultural engagement.

In another setting, the premise would not have elicited the resentment that I shared with others in the local arts scene. Bolster describes Shuffle as “an a-contextual show”, i.e. an exhibition needing no frame of reference. Is TULCA supposed to represent or respond to the West of Ireland? Tulca means wave in Irish. Is it a movement or vision from the West? Or is it just another biennial on a self-contained, globalised arts circuit for established artists, where art travels from one node to the next, cut off from the particulars of its exhibiting locale?

Bolster unsurprisingly chose to exhibit established, not emerging artists. Most were Dublin-based, recognizable names, enjoying gallery representation or with significant solo shows already under their belts. A few, like Allan Kaprow, were of major international significance. This is not to say that I oppose the exhibition of Dublin-based or international artists in Galway, but rather I disapprove of the particular exclusivity of Shuffle. Contrary to the catalogue’s conceptual attitude, Bolster’s curation panned out to be fundamentally conservative and, as such, is nothing new; it is much aligned with the status quo of the bourgeois sphere of art. Indeed, it seemed to be an exercise in career development, coupled with inexperience.

The organisation of the exhibits themselves was the festival’s most startling aspect. A tremendous amount of time and energy, not only precious space, was given over to reflect what we experience everyday: the ephemerality and haphazard organisation of culture. The gallery space tended to reflect asymmetry, as well as poor organization. Shuffle was inexpertly laid out, with pieces vying for space in one section on the ground floor, while only a single piece, a video installation by Jun Nguyen-Hatshushiba, was shown upstairs, leaving the rest of the vast space perplexingly empty. This emptiness is especially galling when we consider the relegation of emerging artists to a castle in Athenry, Henry St. and Cluain Mhuire. Couldn’t their work have occupied this space, and been viewed by a wider audience? Instead, this arrangement physically replicated the relationship between the West and the Pale; the so-called periphery and the metropole; the rural and the urban. This dynamic was also reflected by the absence of 126, MART or Artisit? from a talk on artist-led initiatives. Another strange maneuver was the use of the Galway Arts Centre’s ground floor for an archive piece on Derry’s defunct Orchard Gallery, yet last year the same venue hosted the Artist-Led Archive. One wonders if Bolster had bothered to do his homework on the Galway arts scene.

Perhaps my frustration is only symptomatic of the confusion regarding TULCA’s vision. What will differentiate TULCA from the Galway Arts Festival or from EV+A in Limerick? The organizers of TULCA need to rethink their vision for the festival, especially with the current economic crisis. With less money available to emerging local artists, shouldn’t TULCA assist in bringing their work out to a wider public, as well as highlight exciting ideas and imaginative alternatives to the flows of capital that bring the usual suspects to our galleries and museums? To me, Bolster presented an apolitical, entertainment-based curatorial vision that reflects the festival’s inconsistent vision of itself. 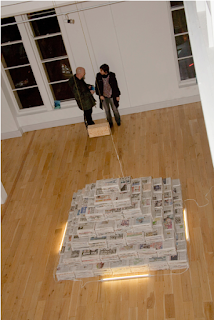 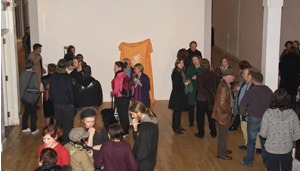 Installation views from the opening night. Images courtesy of Tulca.