On the ground floor gallery off of IMMA’s courtyard, the viewer enters a carefully constructed and haphazard installation called Death Drive (interrupt the circular logic of re-establishing balance because he is the lowest outcast), 2009. The room has plywood ‘strewn’ about it with automobile wheel markings on the surface. The edges of the timber are carefully worked back to give the illusion that the timber has been broken (yet into manageable bits). The piece recalls some of Phelan’s prior work and interest in ‘boy racer’ culture. If the intention is to declare driving an art; that car enthusiasts are artists, then I am reminded immediately of the car advertisement trope declaring a new vehicle ‘like a work of art’ and prominently displaying said vehicle splattered in primary colours on a canvas with corresponding tyre marks.

However, Phelan’s piece, like the advertisement, is an imitation. A tyre or print of tyre treads was applied to new ply and intentionally placed in the first gallery space. There is no sense of danger, risk or thrill in this re-envisioning of night time car activity. This is the product of a studio. It is the aestheticisation of an experience. The clear treads are not the remnants of squealing tyres ‘burning rubber’, but a contrived gesture towards a pre-existing and self-contained subculture. When compared to a work like Rauschenberg’s Automobile Tire Print (1953) or to the dare devil activity itself, Phelan’s installation simply lacks authenticity, veracity and energy.

Following the exhibition into the next rooms, you encounter a space of strange hybrid sculptures constructed of paper-maché and wood. Phelan has a history of creating whimsical historically researched pieces from simple materials. These sculptures, made from texts ripped out of books or newspapers, illustrate historical or literary figures. In Douglas (lacked the dimension of radical Evil), 2009 Phelan devises a clever idea to create a portrait of Generation X author Douglas Coupland with the text of his own writing while small unpainted wooden spikes comprise his five o’clock shadow. But is the viewer moved or challenged beyond that? Further reading explains this is a depiction of the author in his work jPod, in which he plays a character in his own novel. Ermmm… So what? Others include Bent (striking at himself), 2009 a depiction of fictional author Ross O’Carroll Kelly’s legs merged with an unbeknownst-to-me car part. There are more of the same type of ‘illustrative’ works, one with Roger Casement’s head stuffed with wooden jungle plant leaves (what if that was your head?) and another Mosquito Man Arthur, 2007 which is pretty straight forward. These pieces act as a simple metaphors and illustrates them in sculptural form. The 3-D work here could be criticised for the quality of its construction. Paper-maché may not be a ‘high’ material, but when put to use with the text/author theme I am not troubled by this. Ultimately, it is well made paper-maché. However, more importantly, this concept of material-as-metaphor is easily grasped and wears thin after a few pieces.

Moving towards the back room of his exhibit where there is a large installation, one encounters a few different styles of works altogether. Bad Glue, 2006 features a framed newspaper from the day of Milosevic’s funeral. The accompanying description tells us Phelan was on a residency in the former Yugoslavia and that the obituary has been accidentally glued with the wrong type of adhesive and will surely decay. But it has not yet. While this is a very interesting artefact, Phelan’s attempt to imbue the work with added conceptual value through an accident seems misguided and fails to achieve much. Over a fireplace is Hungarian Italian Abstraction (vertigo blue temporal event), 2009, a linear abstract painting of the most generic kind of Bauhaus influence; it is painted on wallboard. The description tells of a journey to the Italian Alps and a stay in a hostel that was covered with such murals. Phelan has recreated one from memory. As we pass through a short passage to the back room, we notice a section of wall the size of the abstract has been cut out. Rather, a careful illusion has been created by the addition of a false wall and then the removal of a section of it. The result is a rare moment of fun and the unexpected.

In the back room is a strange marble hand sculpture The Other Hand of Victory (ontological madness), 2008 which at first glance appears to be giving us ‘the finger’. In fact it is the ring finger that is raised, and oddly all the other fingers have been removed. The result is iconic, ambiguous, vague, as is its relationship to the installation opposite it. With a little reading, the work yields some content. It is based on the marble sculpture Winged Victory of Samothrace, C.190 BC on display at the Louvre in Paris. One of its hands is badly damaged and displayed in a vitrine. At last, Phelan’s work reveals itself. Unfortunately there isn’t much material provided in Fragile Absolutes to infer this connection to classical sculpture. I wonder: did most viewers get it?

Dominating the room is World War 1 in Colour (the void itself), 2009, a photographic and plywood installation that covers two walls. The work is randomly tiled, alternating between timber and image. The images are immediately identifiable as about a century old and then more specifically by the subtitles underneath them. Phelan has photographed a documentary of the origins of World War I. Further reading reveals that these images are from a free DVD from an Irish Sunday paper. The scale of the work and the weight of history gives the piece strength. I read the subtitles and wonder how accurate this packaged history really is. The stories the people in the images would tell, if they could, would no doubt be troubling. Knowing that the artist spent time on residency in the Balkans yet has decided to produce a work about the area via a free tabloid insert from home is intriguing. How do we know and how do we receive information? Unfortunately I can’t help but think that the inclusion of World War 1 comes off as an afterthought and not a primary theme of investigation.

Phelan’s work dabbles in a range of topics, but is not thorough. Nor is it conceptually coherent. I’m not sure exactly as to why the choice of these specific works or what fundamentally the artist is driven to communicate. Often I feel I’m sorting through unrelated trivia. Is this just bits of odd research that are timely and topical to artists in general or to Phelan in particular? There are many points of intrigue however. The idea and history of camouflage is particularly fascinating. As is Irish ‘boy racer’ culture. I am interested in much of what Phelan peruses, I just wish it was with more intent. 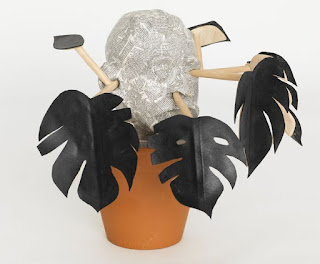 All images courtesy of IMMA.