“To have read Das Kapital in the 1970s wasn’t a complete waste of time because it has helped me understand China in the 1990’s.”

“To Get Rich Is… (around the corner and on the opposite wall) Glorious”. Each letter rises above eye level and works as a separate sculptural piece. They are comprised of hundreds of cheap everyday materials… all plastic and garish. 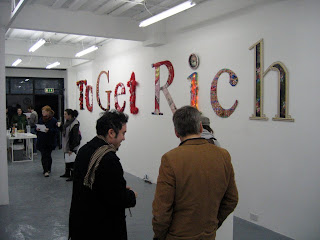 The subject of this exhibition is former Chinese Communist Party (CCP) leader Deng Xioping. Along with his factional power struggles, Deng is also well known for adopting the ‘socialist market economy’, ushering in the massive transformation of China into what we know today. This bizarre and oxymoronic term can only be described as literal ‘double speak’. 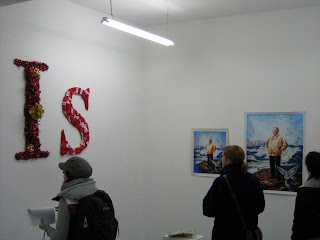 China’s ruling party felt threatened as the Soviet Bloc broke up and the USSR dissolved into chaos and then gangster capitalism. The Machiavellian solution: stay in power, even if it means rewriting your own rules. And that is what Deng did. Slowly in the 1980s and without hesitation in the 1990s, China’s state monopoly was disintegrated, the ‘iron rice bowl’ (workers’ entitlements) smashed, as private ownership and foreign investments were introduced. China developed a stock market and entered the WTO. A clear class divide is now apparent; the CCP works on behalf of the owners, even as it maintains official Maoist rhetoric. Arguably, the rich coastal Special Economic Zones of free trade that Deng set up act as a distinct imperial power ruling over the poor rural mainland. It is also arguable that China has become a global sweatshop, enforced by the ‘strong hand’ of the CCP, which violently cracks down on dissenting students and organising workers and shuts down arteries of protest on the Internet, all in the interest of the new capitalist cadre. “What is clear is that without this turn to the market, originally envisaged as a detour, the rule of the [CCP] bureaucracy was seriously threatened”(1); thus Deng becomes a secret saviour for today’s new Chinese ruling class. 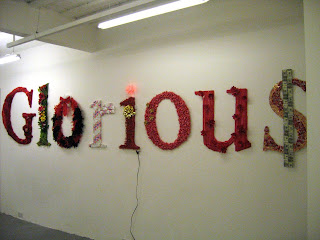 This is where Sloat finds his entry point for his first European exhibition. He began his research in Taiwan on residency and continued, across from his studio in Boston, at a 99¢ shop filled with cheap, colourful and tacky goods, all ‘Made in China’ for eager US consumers. He picked, categorised and assembled these imports into the adage, “To Get Rich Is Glorious”; the quote is Deng’s and dates from a famous visit in the early 1990s to China’s southern coastal regions. Each letter is made primarily of a single material: false flowers, rubber gloves, plastic toy firemen, wrapping paper, fake fur, play money, tissues, etc. The artist plays with the materials, whimsically, dressing up the letters with an overt wit, sometimes he risks overworking them (it seems, at times, he did not always trust the process he had set in motion.) And sometime the letters work flawlessly; he allows the materials themselves to dictate the form, creating a perfect dialectical synthesis of form and function. 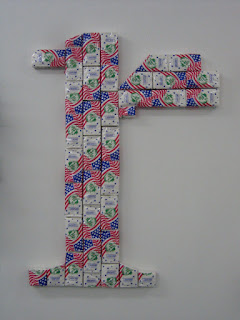 A few nice subtexts underlie this piece as well: he used a font remarkably similar to Google’s; the IOU in Glorious is representational of the Chinese flag; one letter is comprised of a plastic lenticular of a fake Baroque painting which nicely opens the show back up into European art and Western taste; another is fake fur and pleather belts… brilliant.

Sloat’s installation works because its subtlety and variety is held in place by the quotation itself, a conceptual coup. This is not just another pile of unresolved materials; a pet peeve of mine concerning contemporary art is this notion that if quotidian objects are collected, particularly those relating to consumerism, then there is automatically commentary or concept. Ben Sloat’s work is exactly the opposite: he constructs a memorable and unique installation with the literal accumulation and surplus of capital into a quotation from a Chinese leader who had radically reshaped that nation into an Orwellian hybrid of capitalism and CCP rule. 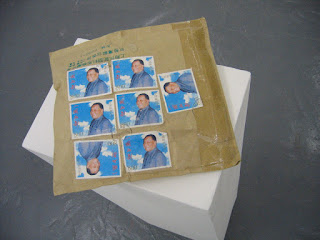 A large envelope adorned with numerous Deng postage stamps slowly swivels in the centre of the gallery. It is the namesake for the show and an untouched artifact offering a detail of ordinary life: in motion, constantly being handled, animated; representative, perhaps, of some still living element of Deng’s legacy. Yet the piece is also a bit of a footnote, unresolved on its own. It punctuates the space, but left me perplexed.

A repeated image of an old man in a windbreaker reveals subtle variations in each of a triptych occupying the back wall. On a side wall, the same idea is repeated in two other diptychs. Sloat hired workers from a Chinese painting factory to copy well-known propaganda and memorial images of Deng. He then asked the normally anonymous proletariat to sign the works and become named artists within the show. This subtle gesture is one of my lasting impressions of Package from China, it is both generous and empowering in real and symbolic terms. I am surprised he didn’t go one further and completely reverse class dynamics by crediting these individual fabricators on the list of works, although this would, perhaps, change Sloat’s role to that of curator or patron. 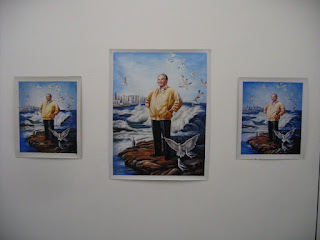 The paintings themselves reveal the subjective decisions, conscious or not, of the painters. Each is unique. Some contain drastic omissions or re-envision Deng as much more amiable than the others. The triptych in back nails the idea and is a striking anchor and punctuation, as it were, for the entire the show. The other two diptychs say the same thing, but not as well. This series recalls Francis Alys’s Sign Painting Project (1993-97) in which he commissioned Mexican sign painters to repaint his paintings. The copy was then handed off to the next sign painter and the work (d)evolved, becoming simulacra. In the end, I wanted to see more from Sloat, more subjective proletarian interpretations, more Deng by the Sea.

The show represents a very interesting, new body of work that is more politically focused than Sloat’s earlier portfolio. It deals with the big issues of our time in an engaging and political way. The work echoes Baroque and Dada, Kay Rosen and Thomas Hirschhorn, Prop and Pop Art, all harmonised and composed with a humourous post-conceptual inclination. As a colleague of mine astutely pointed out: it is hard not to think of Deng’s expression in regards to the Irish economy’s recent ups and downs, of all the changes in values, and material conditions that liberalised capitalism swept in. Interestingly, the Celtic Tiger is even named after the Asian financial explosion that ‘pre-cursed’ it to the inevitable boom and bust of the market.

All photos courtesy Jim Ricks, Ricks is an artist based in Galway.