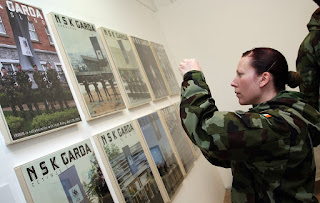 May Day saw the long awaited re-opening of The Model after a two year renovation project. The event aimed to re-affirm Sligo’s position as a cultural centre for the North West, and was a night packed with nostalgia and optimism for the arts. The first exhibition was a show called Dorm, which showcased Irish and international art collectives, presented as an art fair parody. The opening night was an elaborate, inter-active art event, which invited the public to ‘sleep over’ in the gallery on custom made balloon beds.

The concept of ‘Art Collective’ is not a new one. The belief that artists can make valuable contributions to socio-political discourse is authentic and contemporary, but has a well documented historical legacy. All of the collectives represented in Dorm, regardless of their group ethos or approach, appeared to challenge traditional bureaucratic structures by highlighting disparate institutional practices and re-assessing their function in the public sphere. On the one hand Dorm showcased polished, finished and recognised gallery works and on the other improvisational performances or strong anti-capitalist statements. Is a collective simply an organisation that has a life span beyond an individual? Utopian vision engaged with a progressive and experimental approach, which was often anti-establishment and quite cohesively political. Historical references to the Situationalist endeavour to destroy ‘the spectacle’ of alienation in a capitalist society, aligned with contemporary events such as the anti-globalisation protests of 1999. 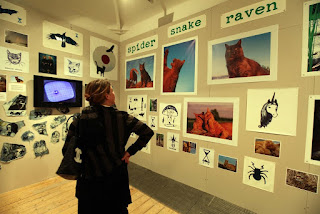 Freee is a U.K based collective, with activist concerns, who show-case the power of words through the creation of slogans, facilitating their display in public arenas using billboards, posters, leaflets and other publications. In Dorm they presented a printed manifesto, ‘The Freee Manifesto for the Alter-Globalisation of Art’. In the publicity material the group pay homage to the historical concept of ‘manifesto’. Using emotive language, this publication urges the reader to resist the globalisation of the art market, which is managed by bureaucrats and capitalist hierarchies. Alter-Globalisation is a movement conceived by creative thinkers, which calls for the revolutionary alliance of artists, forming an organisation which is based on equality and peer learning, aiming to subvert the art market’s commercial agendas.

The Belfast Collective Factotum, publishers of The Vacuum newspaper, also provided the audience with textual offerings. Free newspapers were the medium, the cultural landscape was the message, presented with a discernible Northern accent. The bi-monthly paper is thematically constructed; previous issues include ‘Art’, ‘Satan’, ‘Security’, ‘God’, ‘Nostalgia’ and ‘Sorry’ (to apologise for ‘God’ and ‘Satan’!)

The newspaper format cropped up routinely in Dorm, and the use of text was more dominant than in any show I have seen in a while. The increasing dominance of theory in art has created a rising trend for the ‘explanatory’ in contemporary practice; The labels which once relayed the title and medium have expanded considerably into artist statements, archival snippets or documentary analysis. Could it be that the ever increasing diversity and pluralism of practice is creating a void of understanding? Do these texts function to explain, translate or even justify the work being shown? Is the visual experience simply not enough any more? In a society which experiences a saturation of visual culture perhaps text is a welcome relief. The political overtones of these collective formats seem to request a political form of communication; queue the placard-style statements and the informative posters, in keeping with propaganda strategies and campaign agendas. In general text is more prescriptive than interpretive, although there are occasions when the use of text just deepens the mystery or confusion. 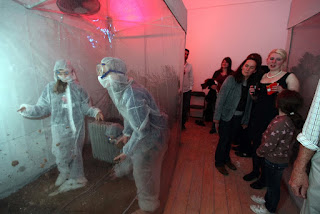 Dorm forms part of a global institutional curiosity about the notion of art collectivism. The Tate Modern, for example, hosted a similar event 14th to 16th May. The weekend long festival of independents, No Soul For Sale, filled the Turbine Hall with an epic array of international artist collectives, installations, projections interventions and performances, with an emphasis on experimentation and interactivity. The event continued the discourse which was established last year in New York’s ‘X Initiative’, the former Dia Art Foundation headquarters. ‘No Soul for Sale: A Festival of Independents’ aimed to create an ‘anti-exhibition’ format, which was widely recognised as a platform for art collectives working out of alternative spaces, more recently termed as ‘slack spaces’. A spirit of ‘hanging out’ challenged the formal museum aesthetic, and the event was received with an air of excitement because of the nature of ‘exchange’ which ultimately occurs when creative thinkers converge to devise new strategies of resisting contemporary definitions of art. Both Dorm and No Soul for Sale seem to inform an institutional critique which questions the validity of the conventional art fair. The contemporary artist is habitually torn between creative freedom and those financial decisions which may undermine the integrity of their practice. The arts fairs, commercial galleries and art dealers are viewed as part of a market which commodifies artworks, a distasteful concept for many, especially those who view art as a form of social intervention or a political catalyst. So if the intention is to no longer compromise the artist, how about the institution? Why has it become necessary or even relevant for these groups to be presented in this context, when it is apparent that art collectives were generally borne out of a desire to resist institutional endorsement at every level? Can this be seen as a move to make amends, to address the void and get the emerging art community back on side? As the exhibition took the form of an art ‘fair’ it should be asked: How successful was this as a critique? Or did it just become a formal consideration? Additionally, the Anti-Catalogue, outside of design, appeared little different than just another catalogue. Has the Model just followed current trends of self-reflexivity and institutionalised the institutional critique? 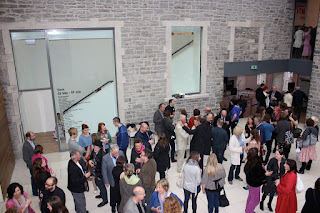 Or is it a case of genuine curiosity and a curatorial desire to show-case what is really happening outside of the institutional filter? It could be viewed by writer/curators such as Boris Groyce, for example, that the gallery/museum/institution is emerging as the real site for contemporary innovation. A converse reaction to this would be a view which affirms that by the time the energy of artistic endeavour filters down into the gallery context, it is already passé, and the myth of ‘cutting-edge’ practice is merely propagated by the gallery’s administrators and theorised by the curatorial vision. I must concede that the idea of these ‘independents’ being show-cased by an entity which essentially represents (or is an extension of) the establishment that they politically oppose, is a concept which does not sit comfortably with me. However this uneasiness is out-weighed for me when I consider the benefits of such a venture.

The opportunity for these art collectives to meet, display work and share ideas, provides a valuable platform for debate around common issues and shared objectives. Perhaps more significant is the chance to engage the audience in this debate, and to introduce them to progressive concepts and emerging practices which challenge the boundaries of traditional art appreciation. I believe it can only be beneficial that the collectives raise those questions which can provoke unlimited scope for change. The best outcome, as I understand it, would be that art collectives have the ability to expose a need for political and commercial re-organisation, and through innovative practice can lead by example. 126 and Catalyst, photo courtesy The Model

The 126 gallery in Galway have become increasingly present in the on-going debate surrounding non-commercial art spaces in Ireland. On the 2nd of May, Dr. Neil Mulholland facilitated a symposium of the various collectives, which provoked some interesting dialogue on the nature of emerging alternative formats to the present and restrictive art market. The 126 gallery discussed their own management structure which consists of an alternating committee (no-one on the board stays for longer than 2 years), so in this way the gallery essentially belongs to no-one individual. This spirit of generosity, equality and peer inter-dependence can offer a powerful dynamic to a group who are working towards the same ultimate goal. In theory, it eliminates the problematic hierarchies which relate to power, and the egotistical dimension which comes with ‘owning’. New formats are emerging in commercial sectors to address the restrictive nature of ‘ownership’ and to extend the boundaries of ‘frontier space’ which occurs when transactions are about more than just the acquisition of material goods. Perhaps now is actually the perfect time for art institutions to be showing work of this nature – progressive and lateral thinkers can navigate this ‘frontier space’ in ways that can benefit us all, and it is re-assuring to know that this sort of activity is going on. 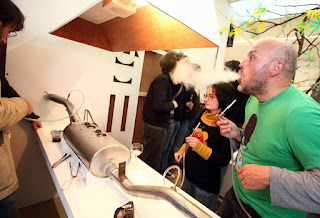 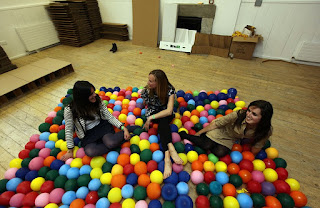