The Woods is set in the off-site Limerick City Gallery of Istabraq Hall. The show features work from The National Collection of Contemporary Drawing. In conjunction with the exhibition, Curator Mary Conlon, has asked three artists from the Creative Limerick scheme to also participate. The press release explains:

“A year after the launch of the initiative, Creative Limerick also promotes the creative potential in the city, having developed an exemplary model in negotiating the use of slack spaces for use in artistic and cultural activities. Producing a series of diverse practices and ambitious programmes, the Creatives actively contribute to the cultural fabric of the city. Laura McMorrow (Wickham Street Studios/Occupy Space), Paraic Leahy (Wickham Street Studios/Occupy Space) and Clive Moloney (Faber Studios) present new works for The Woods.”

Istabraq Hall, located within Limerick City Hall is spacious, bright and unobtrusive. It is ideal for viewing, as it has a wide vista and provides a wide uncluttered expanse in which to stand back and take in the exhibition as a whole. When you walk through its small atrium you immediately see work opposite and nare drawn in. The openness of the huge rectangular exhibition area is beneficial, however, the large lights overhead project strong reflections onto the pieces framed in glass, which can be frustrating as well as disconcerting for the viewer. The reflection of the work opposite is clearly visibly in the glass and is distracting. 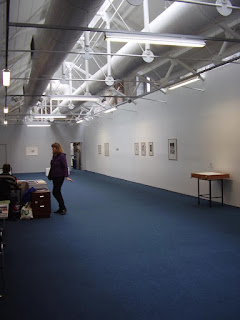 Leahy and the other ‘new recruits’ worked on a one to one basis with Conlon, discussing what they considered their individual interpretation of drawing to be. Although they were shown photographs of the other exhibitors, no pressure was imposed to conform to any kind of theme. The operation was open-ended and Leahy decided to take a traditional drawing approach to his work. The result was simple and playful but within the themes of his own current work, i.e. the importance of titles and how they influence and direct a viewer, sometimes to the effect of contradicting the entire reading of a painting. His images are simple depictions of sparseness within empty spaces, creating a sense of something lost, something waiting to happen or anticipation. His drawing Tastes like Chicken plays on this idea of contradiction, the drawing is of a hare; but the contradiction lies within its title, the concept of wounded animals, traps; large, small; real and imaginary. Leahy and Conlon decided to display this piece on a wall by itself and painted it off-white so that the wall becomes its frame. It is a very effective piece and the quality of pencil-work excellent. His two works framed in glass also play on this same concept. The frames were found objects which he treated to compliment the actual ground for his drawings so that the overall impression is one of flatness. 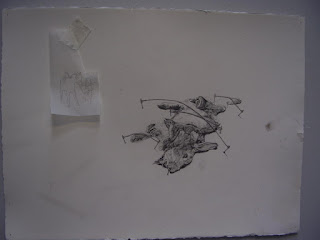 Alan Keanes’ Desktops are great additions to the exhibition, aligning one wall in their entirety. The idea of the found object with its history and pentimenti of previous occupants, lends a nostalgic and fond recall of schooldays where bored kids doodled and scribbled their day away. The spontaneous gestures of unthinking mark-making is perhaps the closest definition within the exhibition to the instinctive nature of drawing. It is fascinating to ponder just what was going through the mind of the artist when he/she scribbled. For example, the head of a devil with horns protruding is evident in two of the desktops – Buffy the Vampire Slayer in the nineties perhaps? The scribbles also indicate historical periods in time and are anachronistic reminders of previous fashions: Beastie Boys doodles circa 1987. One begins to speculate as to how these quirky objects played a role in the lives of these young scribblers. Where and what path might they now be on? 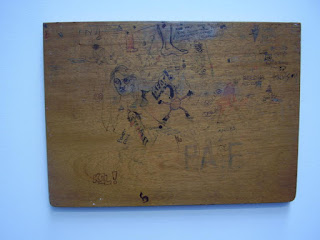 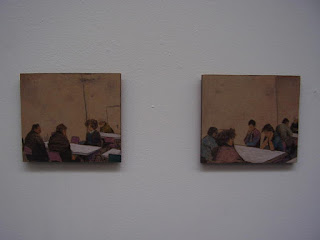 
The sense of the unknown and the anticipatory continues in some of the rest of the work on display. Laura McMorrow depicts two vignettes in coloured pencils of chess players concentrating on their game. The chess boards themselves are absent so the focus remains on the concentration of the men. Their blurry indefinite outlines give a strange surreal quality to the work as if they and the viewer are caught up in some timeless ongoing process from which they have no control. The small, intimate nature of the work draws the viewer closer, enhancing the confidential character of the scenes. McMorrow’s work is of a semi-autobiographical nature in which she places herself in isolated, disembodied situations. This continues in another piece, In Sequence. A simple coloured-pencil drawing positions her at the verge of her paper, teetering towards the edge in a dangerous unnerving area, encased in a wooden televisual structure with handles at the bottom. Will Laura move if the handles move? This piece originally developed as a sort of physical blog like scrolling down a webpage. However, some viewer’s over enthusiasm in turning the handles has now resulted in this idea being abandoned and just one image of a perilous Laura is displayed. 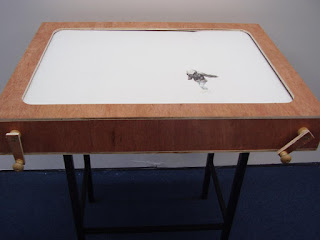 I think the City Gallery are lucky to have such a venue as a substitute during re-development as in many ways one huge arena is more attractive than the several smaller galleries of the old building, particularly for crisp, clean, coherent exhibitions as in The Woods. Mary Conlon has done a good curatorial job as the work displayed does provide telling questions for the viewer as to the nature of drawing. Her invited artists through Limerick Creative’s initiatives are strong examples of the innovative and imaginative interpretations of contemporary art while keeping firmly within the criteria of traditional drawing.

The exhibition is well worth a visit as other works by more of the better known artists are also highly appealing. The over-all effect gives viewers a comforting sense that ‘drawing’ does not necessarily mean accurate and perfect renditions. Even the doodles and scribbles of childhood are not worthless and there are myriad ways and means of expressing the essence of what drawing means to different artists; a reassuring affirmation that you do not have to be technically brilliant to create beautiful drawings. After all not everyone’s an Albrecht Durer are they?