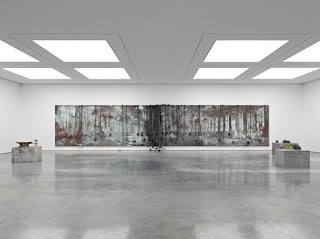 Pictures were largely unobtainable and descriptions fall short; the works of Anselm Kiefer, on show at the newest of London’s Whitechapel ventures, appear as nothing less than awesome. In the end, it might come down to a simple fact of alchemy, a beauty that transports material into another dimension of realism, a feeling of creation. Oxidisation of copper and the impregnation of lead amounts to a captivation of the surface and the spirit, each work as a complete thing. Yes, there is a uniformity, even a sameness, but the earth itself possesses these truths and yet it affords the nutrition and sustenance for variety in both wildlife and habitat, so let’s just say that the work is cohesively drawn and tentatively poised, a miracle in waiting. 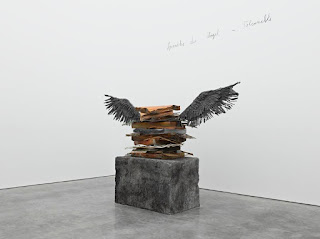 Sprache der Vogel, 1989 Lead, steel, oil, plaster, resin and acrylic (290 x 493 x 170cm)
As much as this is a review, it is perhaps more so a retelling of the story of the works shown. Composed within three stand-out spaces, the grandeur of the proposition only appears to grow with each new discovery. Aeroplanes, buckets, bikes, chairs and wings, readymade or made specially, this handsome body of work displays a kind of modesty that is usually a refinement of natural process, a working of time upon the world. Here, it is presented to us as a life which is both large and intimate, a human eye. From here to the ends of the earth, or as far as the eye can see, both visually and conceptually – a breadth that relies on the viewer’s initiation.

Through the many sizable, sometimes enormous paintings, (three works are pushing eight metres) we are given perspective from a point which is not so much an assertion of fact as an installment into which fact may be both found and buried, the pronouncement of ‘I’ in the world, and more so, the identification of space for each of us to breathe. Given that the worked lines which direct our gaze may be recognisable as not only derived from the lands of his father but also from the type of German architecture that responded to big ideas, none more so than mid 1900’s totalitarianism, it is quite a feat to establish a truly universal groundwork of idealism let alone delight in its truth.

Primarily the result of the raw scraping of material from the surface, the revelation of colour as the bedrock of everything is a sweep of fantasy that enlivens the muted tones of the worked surface to such an extent that art is lit as if from behind itself, a kind of illumination that surely only the living may ever experience – the embodiment of a light from within. Throughout both the show itself and the exhibition handout, we are guided by no less than the dreams of the past and the future. As such, the relationship between freedom and presence is foretold by the meeting of man with his vision. From here on everything is myth. And yet it rings true.

Each piece either bears or exhibits next to a scrawled charcoal or chalk title, ultimately identifying the work as Kiefer’s. This effectively serves to anoint each piece with a power that in turn forms the truth of humanity and the lone human as equal to the vibrancy of our preceding legends. Drawing his influences and interests from across a wide span of exploration, incorporating mystical and material systems of origin, he has sought to pass on the secret and indeed shared knowledge of the ancient rites of alchemy.

The title of the show refers to a 20th century work by Fulcanelli, which claimed that the architecture of Europe’s Gothic cathedrals in fact stored the codes through which the alchemist may deduce the knowledge of the mystics of the past. It might be considered fodder of science fiction to many today but it must be noted that both the Allied and the Nazi forces sought capture of Fulcanelli, and it is hardly too far-fetched to surmise that he knew something which might be of great help to their respective efforts, a knowledge to which he had professed prior to the outbreak of war across Europe. 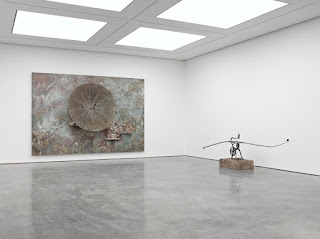 It would appear that by alluding to and referencing past expositions of the mystical world, he is seeking to underline and reveal his own personal direction as intimately responsive to these earlier discoveries. As such, he acts as a kind of transmitter, or satellite as the case may be, (‘Sprache der Vogel’) through which ideas long disconnected from their source might be recomposed and in turn reignited as part of our natural heritage. Indeed, the work ‘Die Freimaurer’ contains a steel compass of the dimensions that would surely only be of use to the shipbuilder pre-CNC, and in so doing, Kiefer has set up for us how and to what extent the reach of mankind is to be gauged. The title itself actually refers to the avaricious ‘freemasons’, who as we know liked nothing better than to mark their presence as material bound. 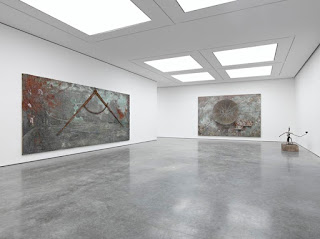 In taking his measurements from life-sized constructed replicas of objects in the world, Kiefer is relaying language as a type of instruction, essentially employing forms of visual and written language as a key to unlock meaning from its trap of the ‘everyday’. This duality of measurement and relationship provides a direct expression in the form of a response and it is therefore neither fact nor fiction, rather it is a composite of energy as a sum total which is self-evident. Whether this energy is curious or it is an action of rehearsal, tension remains the rule along which concerns like balance and resolution are merely side-notes, points of indistinct charm that might betray their essence were this the work of a lesser artist. However, it is Kiefer’s matter-of-fact presentation of all formulate aspects which creates a dynamic wherein the true proposition is not regarding authenticity but rather certainty of his animal species. Although ever present, in this respect balance and the evolution of harmony are never defining characteristics of the nature of the work. That is instead a concern left favourably to the depths of the human engagement, in whose hands the work does not fail to open up before us.

Of course seeing the works is essential in fully understanding how the transference from material to immaterial may have been achieved, and in an impoverished way you may see a selection of them here. However, the accompanying literature, a single double-sided glossary sheet which relates to various phrases that inform the titles of each work, ultimately means that both the secret and shared knowledge is corralled into an easy to manage summary of obscure sightings of rare beasts, beasts because they are so often in hiding, like the secrets they serve to define.

It might be interesting to talk about the way that Kiefer has evoked mystical powers by simply assisting the transference of time into a series of layered consequences, each delicately unique but savagely brutal. This is however only significant if matter comes before mind, blood before thought, in short if it can be stated with any sense of truth that dinosaurs had no soul. A ridiculous thought I’m sure you will agree, however Kiefer who is himself an old man, a living legend for those who feel that painting ought to follow nothing but the smell of man, possesses in himself a thing of the ancient world. He believes that action proves fact and that thought excites myth. So it is that in the flesh, you are encouraged to witness the very marks made by time, neither accident nor impersonation, the paintings show a breathtaking richness, of course in terms of colour and meaning, but more than anything else, they contain routes to the self, pathways that lead you from where you are in the world to the place in which the whole world might ever reside within you.

The paintings in particular are immensely staged pieces of theatre, supremely beautiful expositions on the hardened world of creativity and destruction. Stand close and you will smell the work that gave these monsters life, chemical reactions leaving not only their natural markings but also their intoxicating aroma of dangerous substances. Combine this with visually stunning manifestations of the manmade landscape as depicted through the lens of time and the effect is greater than any simple impression. In fact, what is created is a reality not unlike the one from which we view this other world. A world in which cause and effect is equally visible and yet there is the very certain feeling that almost anything could happen, even nothing at all, a world in which the unexpected is known as real also. This is perhaps something similar to the magician’s trick, a waved finger revealing a hidden truth while simultaneously positing the belief that all magic is hokum.

Who is he to take us in with fictions of the past and reveal only the eternal effects of material forms and substances? Is it that he intends only for our understanding of the unknown to be expressed as a thing as dirty as any line of thinking, a perfectly satisfactory hole within the knowledge of mankind? Or does he actually have some revelatory news from this other world? I would be obliged at this point to revert to type and suggest that what needs to be accounted for is the number of paintings and sculptures, and in what order they appear, but magic is better than that and so is this work, so instead I will simply say that if you get the chance to check out this show then I would highly recommend it. Even so, the work is merely the conduit through which the individual might experience meaning in his own expanse and freedom. So instead why not close your eyes and dream of how you would like the world to be and when you have done that, make it so. Abracadabra indeed. 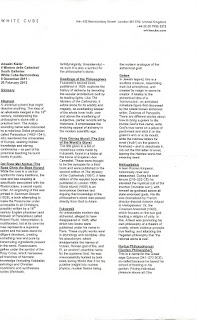 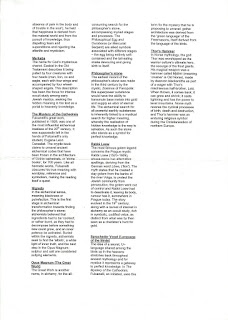