What appeared to be a slew of papier mache chicken legs beckoned cheekily from the display window at Kevin Kavanagh Gallery. They were advertising The Human Race, Sonia Shiel’s first solo exhibition at the venue. It was hard to tell if the sight was something farcical or bizarrely fanciful. Regardless, it certainly begged for further investigation.

As Shiel’s known for an aesthetic that can at times seem unfathomably loose and slapdash – think surrealist artist/director Michel Gondry’s cardboard news studio in Science of Sleep – I was hoping for a strong thematic undercurrent to guide me through this latest body of work.

In the past, we’ve seen installations such as the video piece Titanic, a seemingly hastily penned image of the eponymous ship on Shiel’s undulating hand – presumably an attempt to give a cursory illustration of the vessel’s demise; and Shoot Out, a projection of ‘stars’ (torch lights) hovering in place on a window-like screen before shooting off to the sound of Monty Python-style (coconut shell) galloping. These are not necessarily pieces that can hold their ground without explanation. 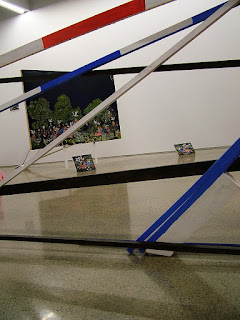 I tore my window shoppers’ gaze away from the mysterious chicken-leg objects and made my way inside to the larger display area. Inside, I was greeted by a series of precariously constructed pink towers of roughly painted (cereal, shoe, various Tesco) boxes stuck together with dripping glue, and what appeared to be horse jumps made of boards and wooden poles. The tower structures were punctuated by a handful of paintings – nightmarish landscapes and portraits channelling some demented cross between a Where’s Wally scene and a 1970s Ron Barrett illustration. The object, one would assume, is to ground the viewer in Shiel’s illusory world. Viewers beware: once grounded, an almost comical frenzy permeates the air even more readily than the smell of Shiel’s paints (which, by the look of my unsuspecting cuff, were still wet even a week into the show). 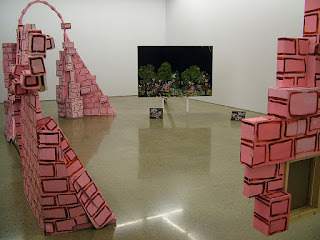 The chaotic painted scenes peppered the walls, the floor, and the box towers, and struck me as akin to something a younger (and less diligent) Bosch might have conceived of had he grown up in the latter days of the industrial revolution.

Latent within the brightly coloured images appeared references to the relentless repetition of a bad trip, and, among other things: depictions of a woman in a boat full of ‘chicken legs’; couples exchanging ‘chicken legs’ as gifts, sitting on a grassy pasture while storks delivered bundles of eggs overhead; cracked eggs hatching into chicks as a fox hunt ensues in the background; the human subjects making a futile attempt at rescuing newly hatched chicks from the foxes that are being hunted… In a word: madness. But what does it all mean? 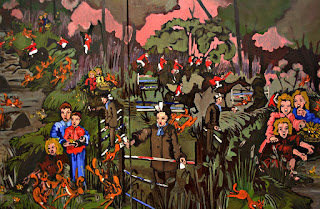 According to Shiel, her paintings, “confront our glib consumption of epic social atrocities by tallying the smaller stakes of human suffering.” A boldly vague statement for such an abstracted collection of work.

Nearly every person whose opinion I considered on this prompt had a different impression of Shiel’s message, but there were some threads weaving throughout the metaphors: eggs hatching into chicks, the humans then attempting to protect the chicks from the foxes (which are being hunted by the humans for sport) until the chicks grow up, in which case they become objects fit for eating – perhaps the ongoing series of events speaks to the paradox of our hopelessly cyclical high-consumption lifestyles; to the fact that our moral progress in life is hindered by an inability to see the humanity for the human, so to speak.

Some will argue that a more straightforward approach could have been more compelling, as with the candy-coloured portraits of American photographer and performance artist Jamie Warren (see series Don’t You Feel Better), or perhaps elongated rumination is the intention here.

Does the atrophy inherent in Shiel’s this-will-fall-apart-at-any-minute work mimic the inevitable atrophy of a world founded on lifestyle consumption, innate selfishness and basic desires? If this is the case, then Shiel’s hasty aesthetic can be seen as an intentional and acknowledged trope – as opposed to an unfortunate by-product of impulsive, almost slipshod execution. It’s the more becoming of the two notions.

Adopting this line of thinking, one gets the impression that the high consumption, or ‘refuse’ materials, Shiel employs are only a means to her far more significant end; in other words, for her, concept both utilises and supersedes craft. This is an idea to entertain while viewing – for although her installations, however tentative on first impression, claim ownership of the spaces they occupy, without an accompanying narrative, their playful potency dwindles in what could regrettably be mistaken for directionless or even lackadaisical process. Perhaps for Shiel the presence of flaws is entirely beside the point. Yes, some technical development would likely harness those visitors turned off by a sense that the work is slightly make-and-do, but might it be possible that Shiel believes that sanity resides in the disorderly, and not in the frivolous act of striving for perfectionism? 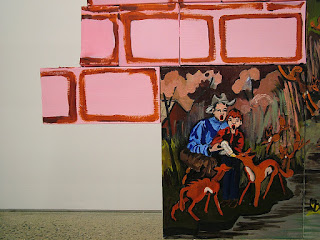 There is something undeniably cathartic about the loose construct of Shiel’s freakish scenes. They don’t necessarily fit together, but perhaps this provokes us to examine its parts more closely on our journey to evaluating the whole. Maybe we’re prone to missing details when visual information is presented to us in a rigidly organised manner.

You wouldn’t want to miss the details here – they have an ephemeral air that suggests they might leave the world as quickly as they entered it. But is this the premise? That the installation should appear to last only as long as it takes to get its message across? I left with the feeling that properly dissecting the art required too much work (and maybe that was the point as well). I just wish that some time had been given to solidifying the concept beforehand, not to mention the paint, which I am still wearing, as a souvenir, on my sleeve.