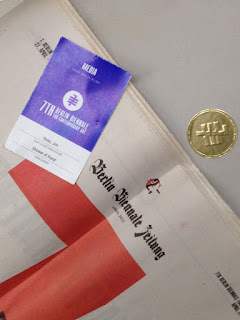 Biennale press pass, welcome packet, newspaper-cum-event guide complete with custom fonts and logo.
Initially, I had intended to write a review of the Biennale.  Although I did I find it difficult to consider the various permutations of this festival in a positive light, it was ultimately the decentralized and event-based character of it that led to my decision not to.  Perhaps, I should have committed to living in Berlin for 6 weeks.  I suppose the political trajectory, or rather intent, of head curator Artur Żmijewski’s was to challenge the conventions of exhibition making.  And he was widely criticized for this, certainly not without reason.  For one, the lopsided sole inclusion of several young artists in the central venue presented primarily nascent works.  The presentation of Occupy Berlin on the entire ground floor, providing the movement with uncritical support, seemed primarily a poor use of space.  Of course much more has been said on the matter including, importantly, a conceptual challenge to his institutionalisation of ‘occupying’.   But, at the end of the day, this process of dispersing, de-materialising and unfixing art(works) and events with a political purpose in a city so laden with politics and history became somewhat confusing.  Art and the material historical fact of Berlin today became intertwined.  I’m not sure this was a bad thing for the subjective me, but am almost certain it was for the Biennale.

There is much more information about these works on the official site here. 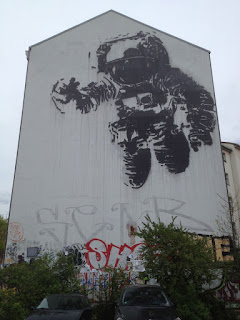 On the way to the press launch, one of the numerous murals in Kreuzberg. 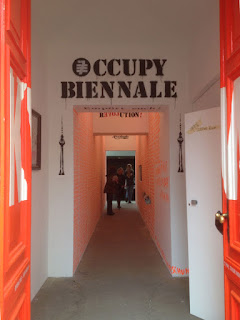 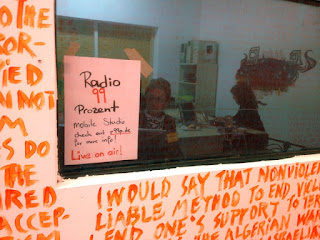 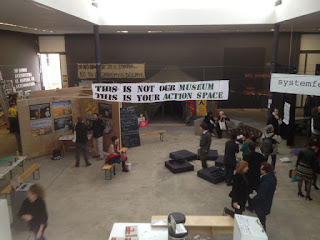 Looking down on Occupy. 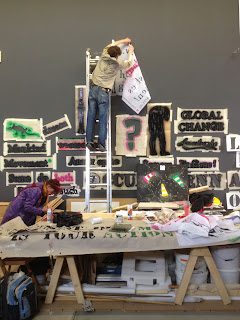 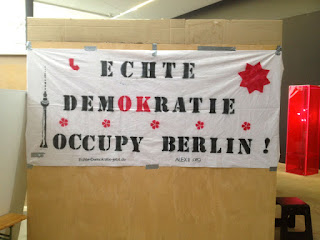 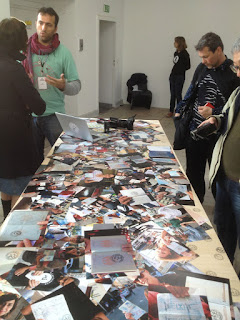 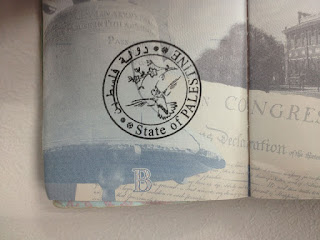 An American had, perhaps somewhat unwisely, their passport stamped with a non-existent/not yet existent Palestinian visa stamp. 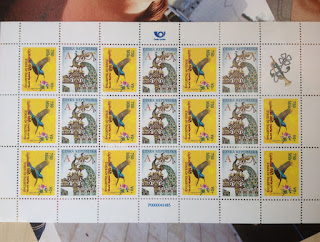 Postage from “State of Palestine” 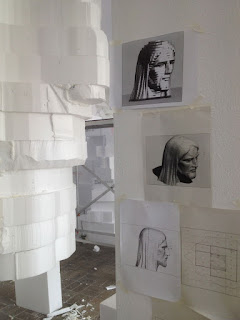 “Beyond” by Lou Cantor 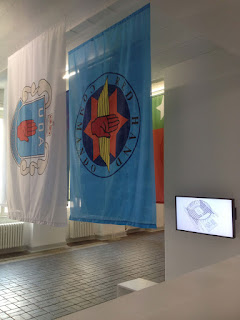 Flags from illegal organisations as part of the very problematic “New World Summit” by Jonas Staal. 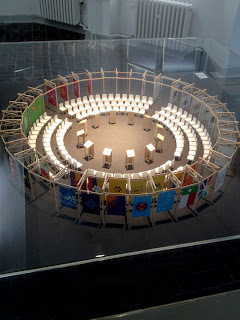 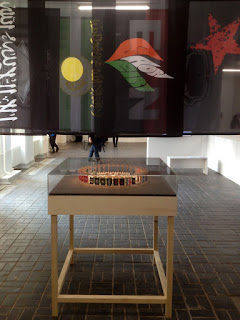 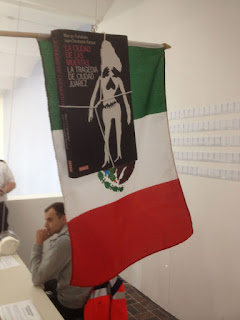 “Blood Ties” by Antanas Mockus asked the public to make a pledge against drug use in response to the escalating drug war in Mexico. 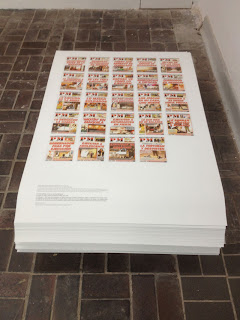 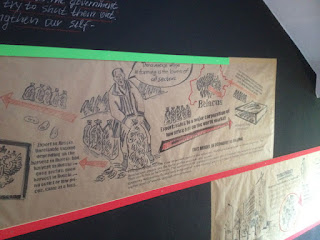 “Self # governing” lined the stairs up to Marina Naprushkina’s installation and newspaper. 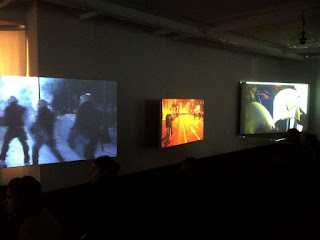 Installation view of “Breaking the News”. 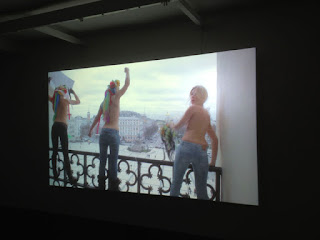 Video of FEMEN group in Ukraine. 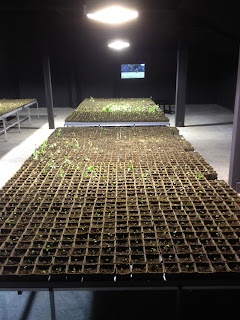 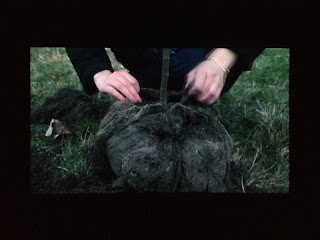 And the accompanying video. 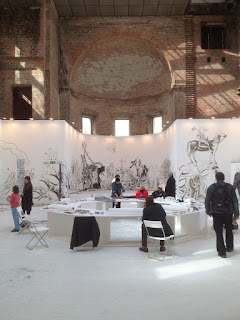 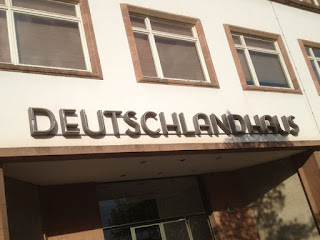 A sparsely used off-site venue, proved interesting in its own right architecturally/historically. 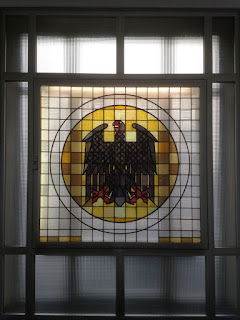 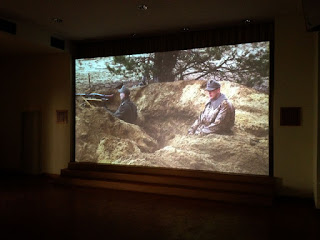 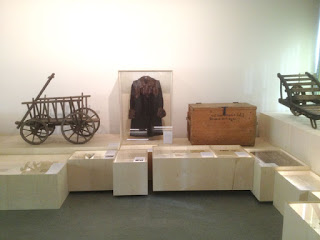 “Remembering Piece by Piece”, the first exhibition for an actual future ‘museum of displacement’, SFVV. 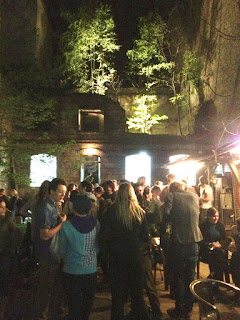 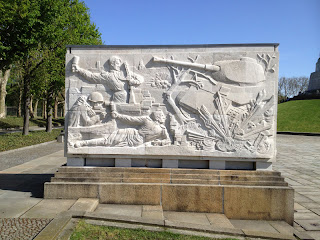 Relief monument to the USSR’s WWII defeat of the Nazi’s, in Treptower Park. 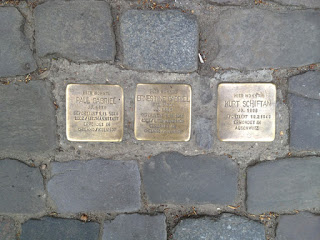 One example of many ‘Stumble Stones’ found throughout the city. An ongoing project that marks the former residencies of Jews killed during The Holocaust.

All photos and text by Jim Ricks

Thanks to the Arts Council without whom this trip wouldn’t have been possible.