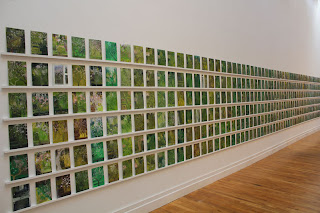 Futures 2012 is joyously mixed in its form and yet it is this distraction which when presented to us is hoped will overcome the obvious weaknesses of art without proper framing or even depth. On one wall sits the result of a routine investigation into the world outside of a window, Ed Miliano “began making a visual diary, painting one picture every day”, and to that end, judging by the quantity, he has succeeded. It is identified that the pictures when viewed together ‘create a collective landscape’ and ‘reflect the seasonal change, weather and time’, as though it were already forgotten how pop culture brought with it the mosaic poster, wherein tiny pictures can be seen to make up a single larger image, be it Bob Marley or Tupac Shakur. To this end I wonder might the transience of the seasons be reflected here also. 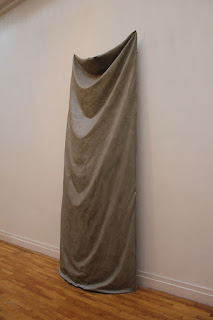 At the foot of this, begins, like a minimalist townscape, the work of Caoimhe Kilfeather, for which the technicality of its production alone warrants investigation. The size relationship and the story which it unfolds display also a considerable insight into perception itself. In fact to discuss these particular works without referencing the involved drama would require a detailing of process, or worse, a rehashing of the artist’s self-proclaimed interests. There can be seen in the long curtain shell which stands where else it might hang, the shape of this very same drama. Humble in its appearance, it is no less a re-imagining of an object which is traditionally employed as means to excite anticipation while simultaneously concealing the function of all necessary transition. In order to substantiate the illusion therein, concrete reinforces the folds, with the effect that reality is never far. Towered over by this somewhat godlike presence, rusted angles, each characterised by their peculiarities, in turn provide the players. Set down side by side on two grey boards, two on each, their differences become highly noticeable and project a warlike energy, as though, were they not cut just so, they might now be part of something far more threatening. As it is they remind of fragility more so than destruction, at rest and haloed by a rust of orange powder, but too they are the product of man at odds with nature and god, like wedges that might, if otherwise placed, upset the balance of everything which seems so concrete. 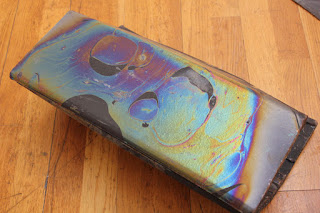 Even more process focused, the works of Lucy Andrews convince of mystery: green liquid in a bowl, gel in plastic tubes, technicolour traces of something lost to time. The fact that this is achieved by exploiting materiality and revealing it to be vulnerable or even accessible, appears no less to disguise that very same condition of the artist, not least because the presentation belies no real sense of a definition of failure. As such, whatever comes of it is perhaps seen as satisfactory, in so far as it has come to be. The obvious mystery therefore is one of identity, namely where is she within the trickery and suspense which she has laid out. A rubber floor-tile breaks like a wave against the gallery wall and no thing any different occurs on its surface than does on another flatter piece, this time stone, to which the artist has applied the very same technique. As a material test there appears to be no control subject, with the result that for the artist what danger lurks cannot ever be real. Though canny elaborations of form, little more than the bone of intellect binds these miscellaneous handlings. 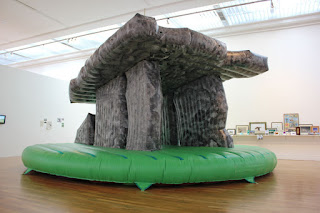 To have a bouncy castle on which you are not permitted to bounce greatly reduces what effect might be otherwise possible. Noticeably Jim Ricks recognised this fact, deciding as such to replace the pure fun of experience with the intellectual pursuit of information about the thing. Taking the form of ephemera ranging from postcards to signs to personal effects, the artefacts which have been drawn from the surrounds of Poulnabrone Dolmen, from which this work takes its origin, in turn surround the larger than life but no less deadened object that is the ‘bouncy’ version. It can only be said that on all sides it was an error to consign this work to the function of sculpture, as such stripping it of everything which makes the bridge which it seeks to build between worlds so pertinent. In truth though, what is dissected as artefact remains simply a tease for the potential pleasure; the slight nod to human excitement, as detailed in the video of the various sitings of snake-like erections alongside the newspaper article which relays the story of a public sign which would not stay up, are themselves equally grounded by the poor relationship between shared intention and individual action. In this respect its relative grounding is apt. Regardless, on my last visit a group of school girls had taken off their shoes and left them at the foot of the Bouncy Dolmen while they stood atop and the teacher took their picture as were the scene something worth remembering.  I asked at the desk before I left if I was right to leave my shoes on and I was told with a business-like clarity that it was forbidden for anyone to interfere with the artwork.  Perhaps it is a question of self-containment; the gallery requiring that work be in and of itself possessing and withholding of the controls, which reinforce its own position as holder of the right to represent. I only hope that that when you read this you will have experienced the real life fun of bouncing around as carefree as any barefoot time-traveller.

An echo is the expansion from one point into many; painters may be seen to bring about effects reminiscent of this transience by manipulating their medium in order to serve another essentially imaginative cause, the presentation of mastery alongside mystery. Of course paint is much of the same thing and almost always reliant on the pigment of the substance in order to process form and articulate both mass and light. In this way both Peter Burns and Stephanie Rowe appear to be negotiating the same territory. Whereas Burns may be seen to allow the image to open out before him and forgive if not relish the tell-tale signs of his previous intentions, Rowe exhibits images defined according to an altogether more mature taste. Although the subject matter, screen shots taken from movies in which the actress is focal point, in turn manages to refresh the eye, it is more so in the manner that a painting in the bathroom might. It’s a place for pause, cut away from the conceit of narrative or character building tension; it is the peaceful joy of homage for the things to which you yourself relate, if that is your taste. 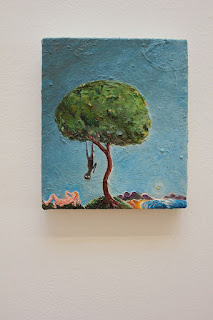 If not then you may enjoy Burns’ foray into the realms of the creative psyche, wherein animals and minerals launch themselves through walls of paint and dive into swirls of a painter’s fantasy. Each work reflects in some way a myth or story which expresses joy and wonder at being a part of something of such detail and pleasure as this or any life. Whether their work, undulous or screen-flat, both artists may be interested in the story of Echo: the Greek mythological nymph who famously fell for Narcissus and became trapped in his sound-bites, ultimately extending his reflection out past the water and on again into infinity. The question for both artists might be how much can making a painting be refined while still retaining that sense of the majesty of looking at things anew. What Rowe shows us is an energy removed from its set contours, relying instead on the new parameters of reissued content, mood, lighting, and in truth, cinematographic pressures which relate little to the reality of paint. The result however lacks the poison of a femme-fatale, instead leaving behind merely the romantic notions of love and loss and those other scripted conflicts of the head and the heart. Throughout Burns’ work, including his arrangement of constructed beings upon a shelf which bookends the paintings as were this a school presentation, there remains at least a fire to see by, not everything is magnificent in the light but it is more so his own creation than a compliment being paid to the source. 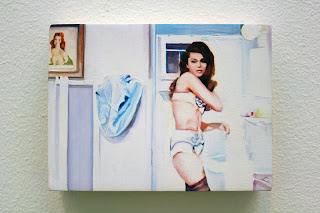 The show in the RHA reveals predilection and taste to be of the highest order, second to which was the work of the artists. Perhaps it was due to the size of Ricks’ inflatable ‘elephant in the room’ but you get the impression that death was somehow being mocked, leaving The Poulnabrone Bouncy Dolmen to read more like an epitaph for the relationship between those who supplement the development of art through funding and opportunity, and those who support art through their commitment to making, in whatever form, the best of it that they can. In whatever guise each clearly presents forth an agenda. As such, what is underlined by this showing is that the system works well, however it favours reinforcement rather than challenge, the result of which is perhaps not the best path for new actions, but then this is the point. ‘Futures’ as a term is itself derivative, specifically it is a way in which the market hedges bets such that the yields are more favourable to the investor than to the producer; in such case minimal subsidies are often provided as scant incentive for the general acceptance of this market strategy. Of course you can’t be sure if this began as a wholly coincidental usage of the term, or if the attention which is drawn to this almost accidental usage might highlight anything more than coincidence but the artists themselves should no doubt be aware that the on-going trade will continue with or without them. The question then is whether emerging artists can afford to remain outside of this controlled marketplace, indeed, what if any might be considered advantages of such a decision. Perhaps next year we will find out.

Note:  This link http://www.kcbt.com/trading_basics.html will bring you to Kansas.. and outline what is a dummy guide to ‘futures’ in respect to speculative economics…