Two new bodies of works spanned the two Jack Shainman locations in Chelsea.  Both formally related, but each very distinct in tack.  For the purposes of this review I will focus on Made by Whites for Whites at 20th Street, although the contrast made by the other, Rescue, at 24th, is interesting. 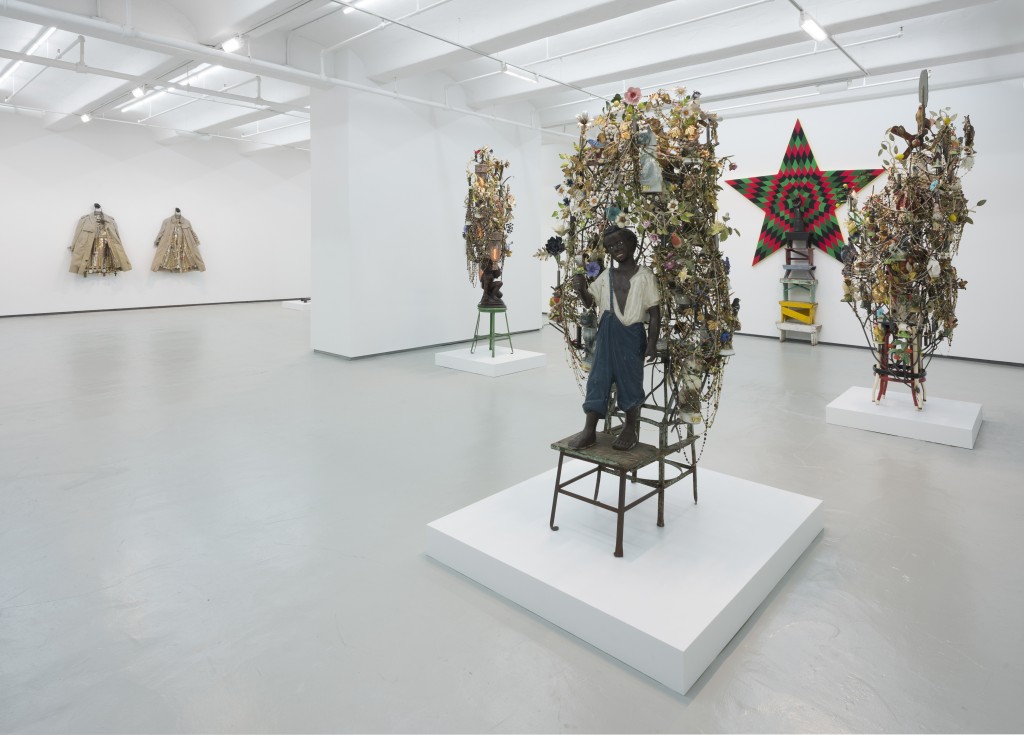 Nick Cave is primarily known for and has worked almost singularly on a body of work he calls Soundsuits.  These are fantastic costumes that have their finger on the pulse of Dadaism at its best origins and echo the Hopi Kachina dancers’ costumes.  Silly and spectacular, they seem like they are not of this world.  They elicit joy on sight with their playfully bejeweled and colourful exteriors.  His knack for constructing light (weight and feeling), floating structures sharing much with the more outlandish side of the fashion world, but also jewelry making or even chandeliers, continues in both his new shows, but there is only this sculptural technique to connect these and past works.

To some extent I question the exhibition’s title: Made By and For Whites.  The identity of Blacks hasn’t been solely defined by Whites.  Quite to the contrary, this identity has been one of the most resilient and the most challenging to the status-quo.  In my opinion.  And of course there is the Sambo Art itself.  It is a strange and foreign thing for me, a typically White, Irish-German American mutt.  While I know of these object’s existence, they were by no means something I encountered until well into adulthood.  Coincidentally, after viewing the show and discussing it with a friend, he produced from his personal collection of stuff a cast iron mechanical bank Sambo art. “Made in China” was embossed under the base.  There is also that White is a colonial term really, explaining the common goals of these diverse, yet similarly pigmented European newcomers.  Indeed, the complexity of race in the United States cannot be discussed without touching on the active construction of a ‘White American’ identity (see Noel Ignatiev’s How the Irish Became White for instance), a convenient buffer for the ruling elite of European immigrants; one of the great divides in ‘White’; another way to never talk about class.  I digress. 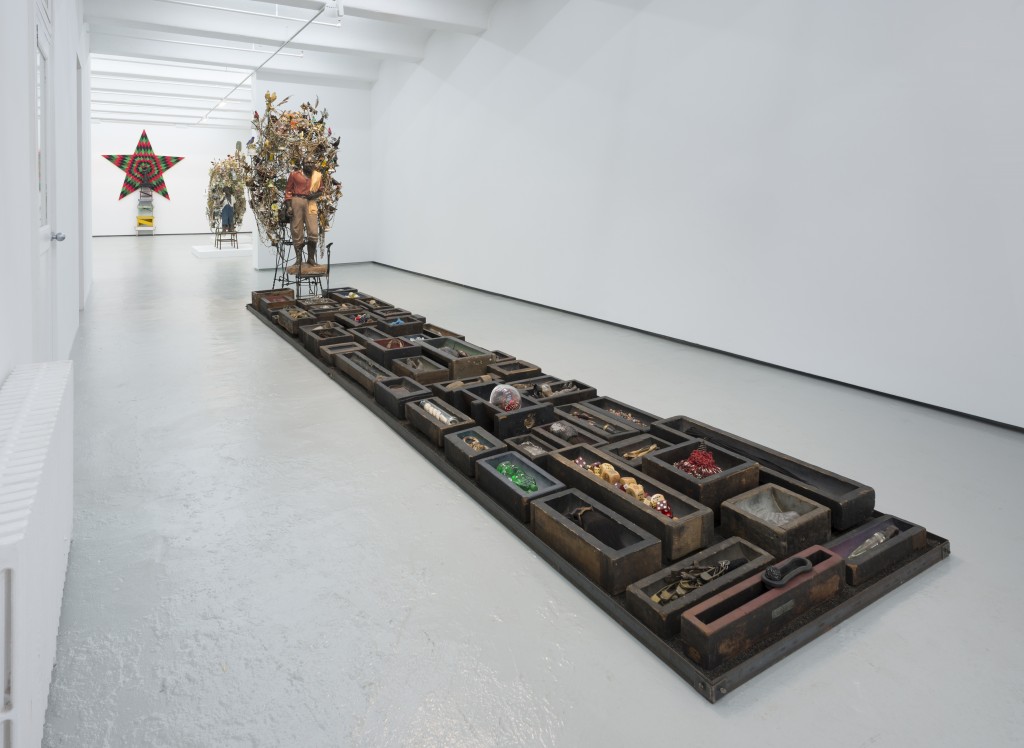 Upon entering the gallery, after collecting my free White Paper (with essay and images), a black rectangular low-lying horizontal platform cuts down the central corridor.  At it’s head is a religious icon-like assemblage.  A black figure – figurine – has a dense halo of ephemera suspended around him.  At his feet lie dozens of heavy wooden boxes.  It is like some kind of typesetter’s case for letters, but instead scaled up, containing samples of racially evocative objects and Sambo Art, some antiques.  It places us firmly in the past and picks away at preconceptions of African-American identity with what can only be deemed a racist cabinet of curiosities. 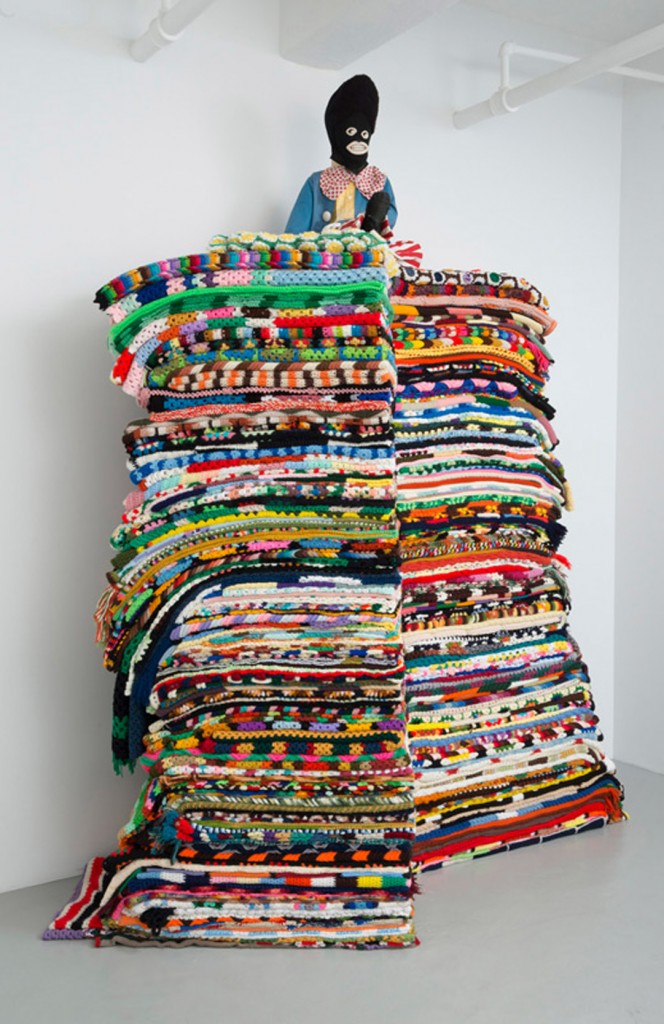 Just beyond lie three more similarly constructed pieces.  Miniature, impoverished looking black humans, the blackest possible humans, stand on chairs and stools backgrounded by a swarm, or a bush, of ceramic chachkas strung with innumerable beads.  One is a stool.  Titled End Upheld, the small black figure hoists up the seat itself.  The chandelier-esque abundance above is raised up with his efforts.  Birds and flowers flourish.  A room to the side draws me away.  In it is a high-to-the-ceiling stack of crocheted Afghan blankets.  Perched atop like it were a throne is a rare racist collectible indeed: a super sized hand-made doll of the ‘comic’ golliwog sort.  Bearing little resemblance to anything human, teeth clenched as vagina dentata, he is The King of the Hill. 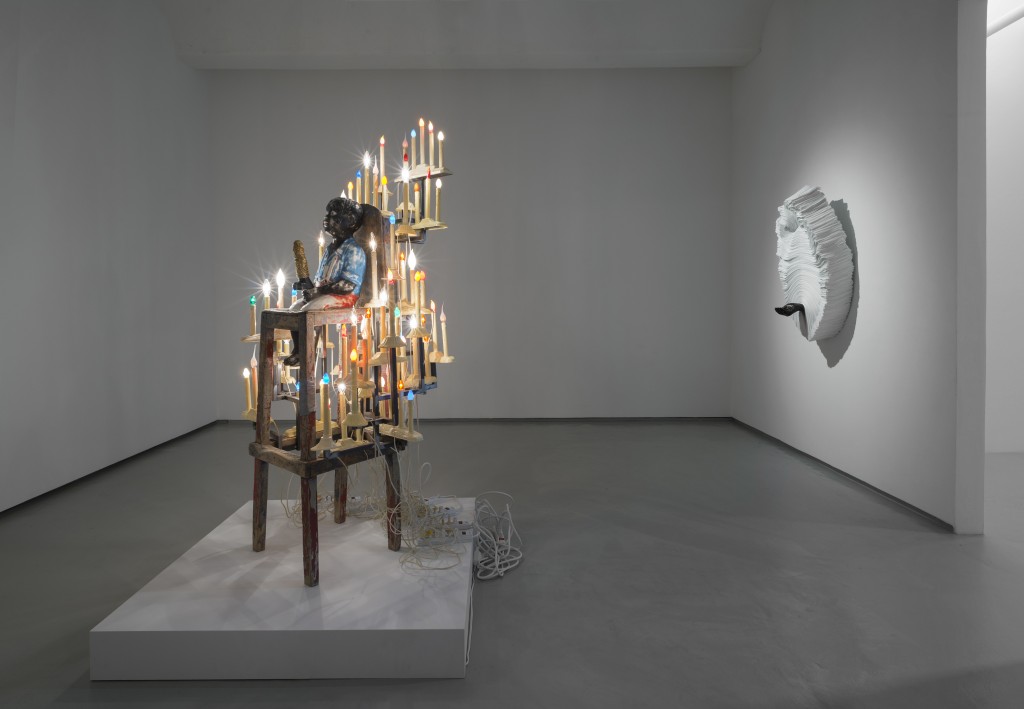 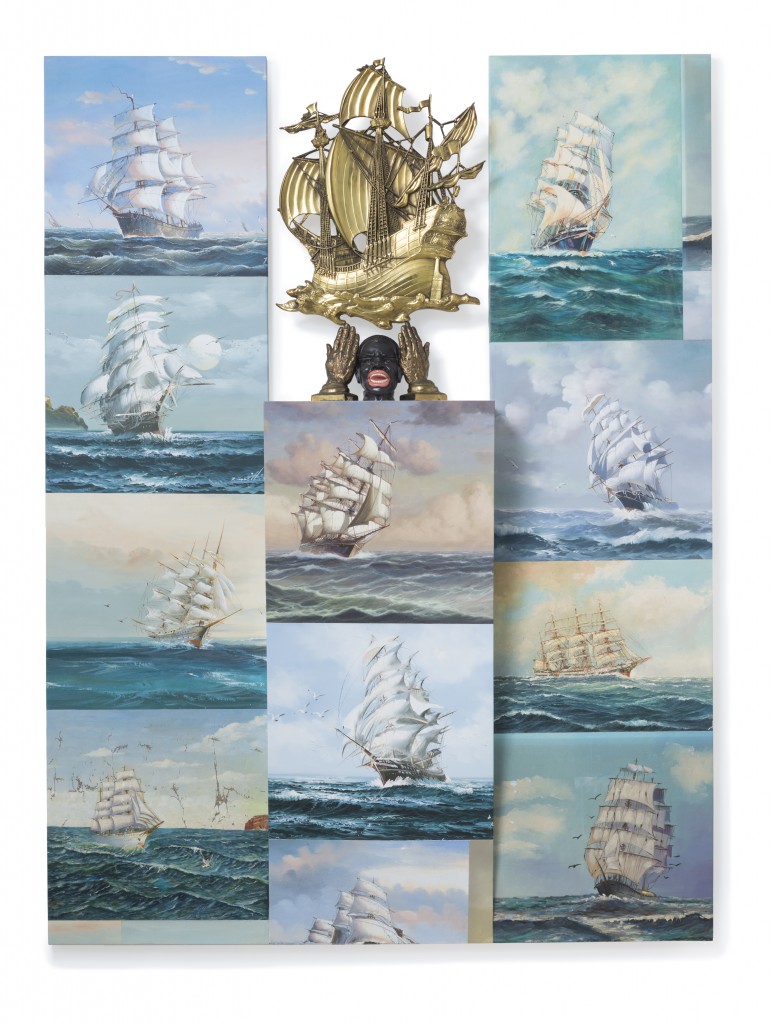 In the main room a shrine of sorts is created with the piece Sea Sick.  The figure head is an anguished black-face jug.  Two unrelated, yet matching hands are raised by his face.  A large golden ship made in relief is affixed above.  Cave has installed multiple variations of the ‘same’ nautical painting – an appropriated image of a say 18th century cargo sailing ship –  behind and tiled to fill the space.  Slave trade evoked.

Inexplicably, the few remaining pieces transgress the artists’ stated purpose.  Staying on the subject of black identity to be sure, but not on the subject of an identity imposed hatefully, mockingly by… well the sort of White American that does that sort of thing.  Rather the remaining pieces push at other more contemporary stereotypes.  One such piece is an “indoor badminton net” made of piled up, inconceivably long, gold chains spelling out an indecipherable message at its base.  As it turns out it reads as a Martin Luther King, Jr. quote. 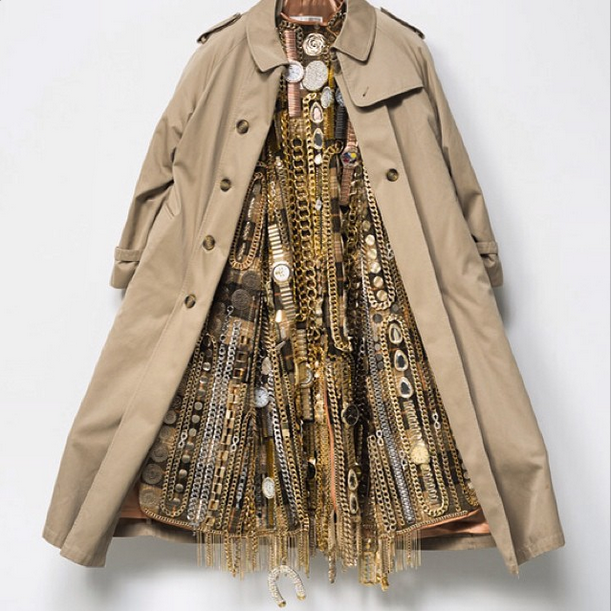 Another, and I loved this piece, was closer in territory to Cave’s Soundsuits.  It was a simple trench coat lined with watches and chains; bling.  But of course this ‘hustler’ stereotype isn’t exclusively attributed to blacks, a trope difficult to place or date exactly.  I tried.

Star Power, the third ‘odd man out’ began at the floor with a diminutising ascension of well worn stools.  A carved black solidarity fist was placed on top of the pyramid.  An Afro-centric-ly coloured quilt in the shape of a huge star was hung behind.  Semiologically speaking, it was well played.  But this clearly is about something else now.

Cave’s other body of work, Rescue, in the other Jack Shainman gallery two blocks away, was constructed much like the first pieces described above.  A nest of chachkas with a foregrounded figure atop furniture.  Yet these other figures were all life sized ceramic dogs.  I can’t help but think of this as a mistake.  To present such loaded material alongside such wonderfully banal subject matter can only undercut the more serious of the two.  The incongruity diminishes the political.  An error no doubt perpetuated by the allure of the irresistibly compelling market.  Indeed, a ‘safer’ body of work for the more cautious buyers would no doubt provide a fiscally sound safety net.

Cave, a Black American male, approaches the still challenging subject matter of racist Americana imagery.  I actually sought out a term for this and failed to do so.  Henry Louis Gates Jr.’s essay “Should Blacks Collect Racist Memorabilia?” is reprinted in the free White Paper (alongside selected exhibition images from the show).  He uses the term “Sambo Art”, I have followed suit.  Interestingly, The Jim Crow Museum of Racist Memorabilia elaborates with particular categories: brute, tom, picaninny, nigger, saphire, jezebel, mammy, coon, mulatto, golliwog, nat. 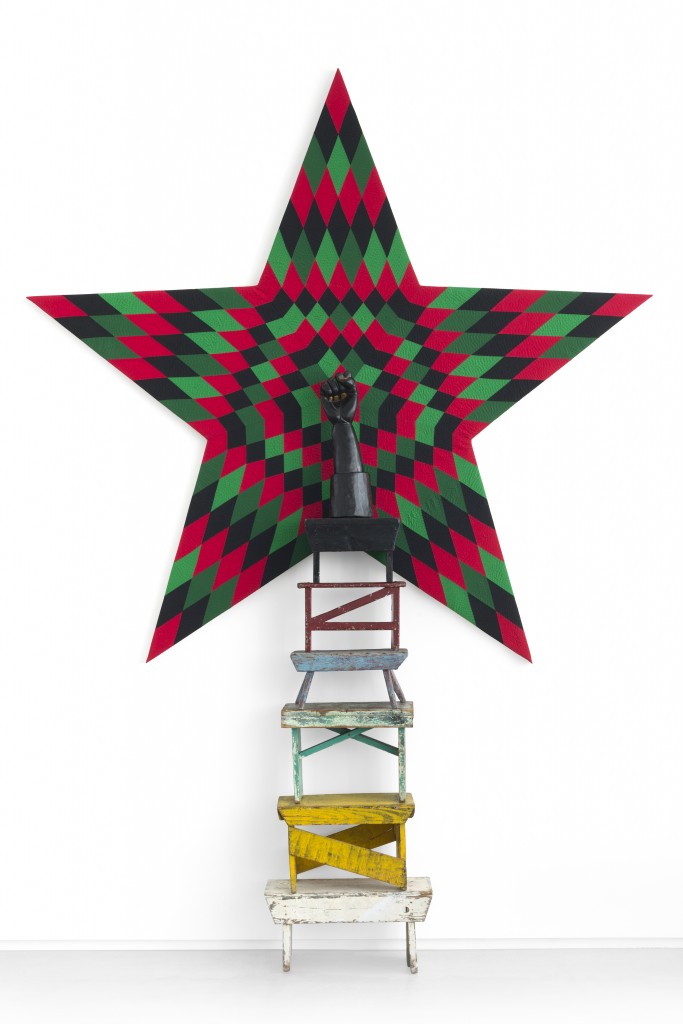 There is a certain foreboding dread and horror with which I write and read back these words.  Certainly a particularly, but probably not uniquely, American condition and sensitivity.  I shudder at the sound of them.  But of course, this is superficial.  It is what these words symbolise, what they are rooted in, and the past we have inherited that is so abhorrent.  Yet when confronted with them in a scientific, historical way it allows us to reflect and maybe to gain insight and to feel; a flicker of understanding.  And in the same way operate the sculptural assemblages of Nick Cave, most containing a leading role for a singular artefact of Sambo Art.  He has collected the physical embodiments of racial slurs. And with undeniable sculptural savvy Cave weaves, piles, accumulates, and arranges these into a beautifully, and expertly, complex system of symbols.  Challenging audiences with the very indisputable fact of their existence.

Made by Whites for Whites