The art a city absorbs says a lot about its inhabitants. What the city nurtures from itself, but also what is invited in. As waves of trends of collectives and movements come and go, people can become jaded. Every now and then a show comes along that makes you review your art intake. 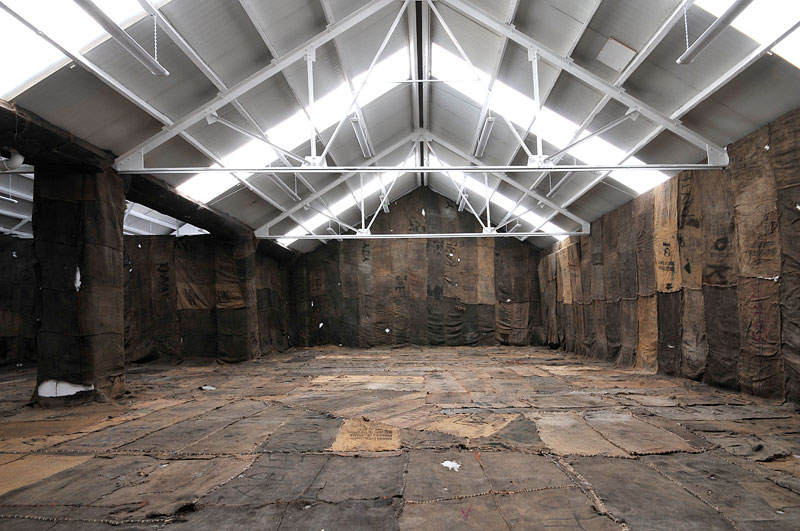 The Ellis King Gallery has been open just under a year, so for anyone who hasn’t visited I will describe the gallery. It’s located on the outskirts of Dublin city, but is very much detour worthy; there has so far been an interesting selection of international artists shown. It is situated in a warehouse space on Donore Avenue, between Cork Street and the Grand Canal. The gallery entrance has double glass doors, a short corridor, sharp corner and then an open space with a high, pitched ceiling. Theres a pillar, it’s not entirely square, but generally it is white and cube-like. 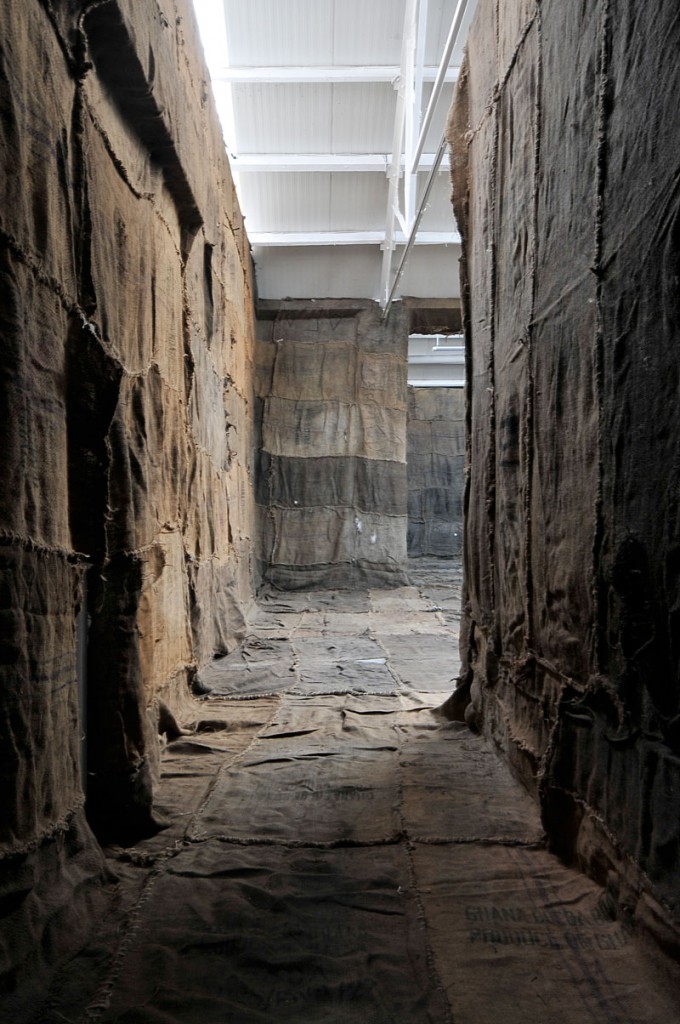 At the opening of Civil Occupation I was expecting to walk in to Ellis King and find this chronic ‘white cube’. Immediately my assumption was replaced by intrigue as I entered a transformative, all engulfing installation by artist, Ibrahim Mahama. I encountered what can only be described as a literal blanketing of the gallery space.

Only the trace of a gallery remained. The room was recast under stained, natural fabric; draped from the ceiling, cloaking the floor, pillars wrapped. Small tears revealed the wall beneath. The fabric was a repetition of raw hessian, or jute, sacks quilted together. The upended canopy, a patchwork of every imaginable earthy brown. Authentically ‘second hand’, and visibly worn, you have to ask ‘where did they come from?’ 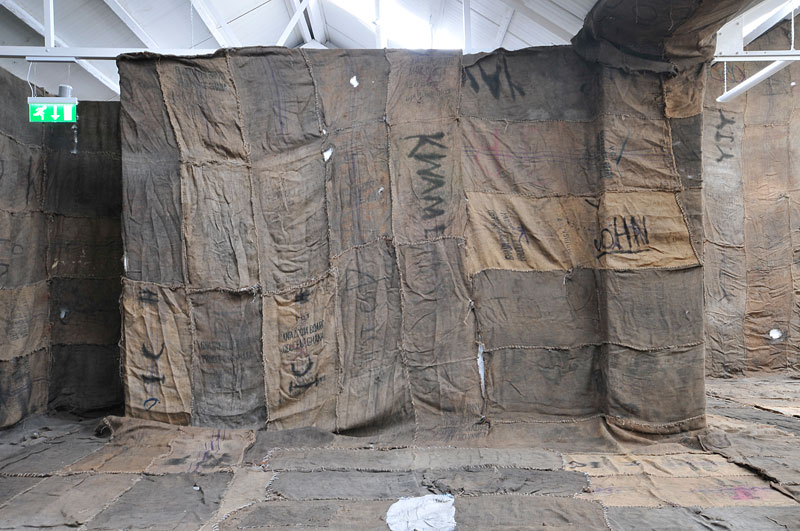 In a previous incarnation in Ghana, these sacks were used to transport and sell cocoa, and then coal or maybe other wares. Mahama interrupted this pattern. Having them sewn together with sturdy threads by local, mainly female, workers. To amass enough jute sacks for a work as overtaking as this, Mahama traded new sacks for these old, worn ones in a direct exchange with market workers. They’re dirty from continuous use and many bear names and markings, telling of physical work, manual labour, ownership, and humble human use. In simply leaving the material as is, he is directly acknowledging the many previous labourers alongside the finished piece. 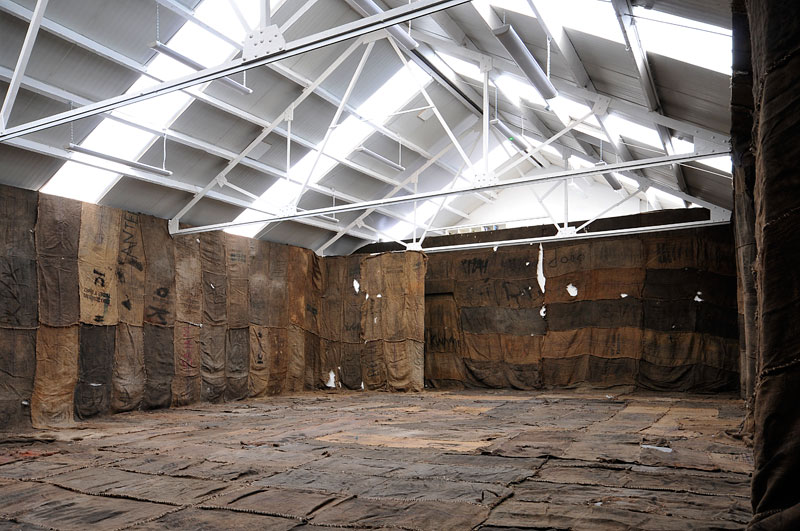 The sacks are stained from their past lives. By perpetuating the lifespan of these utilitarian textiles, Mahama uses the fabric as a portal to shift perspectives.  And importantly, to move his audience to accept the existence of other situations. Aesthetically, Arte Povera is invoked. The woven hessian they started out as becomes a storied, archival document and the essence of this show.

Alongside the initials of previous owners, the sacks are significantly stamped ‘GHANA COCOA BOARD PRODUCE OF GHANA’ from their first function. Cocoa beans are not a native crop of Ghana. They were introduced in 1876 by Tetteh Quarshia, a Ghanaian agriculturist. An economically expedient choice, as the climate allows the crop to be harvested year round. The cocoa bean is Ghana’s main cash crop and the country is the second largest cocoa bean exporter in the world. Of course, in a classic hierarchal move the government has maintained tight control over cocoa production since 1979 (hence ‘PRODUCE OF’) and now runs a hybrid state/privatised system devoid of Fair Trade laws. Keep in mind that, incredibly, every stage of cocoa production is done by hand. The planting, irrigation, harvesting, fermenting and drying.

Although based in Ghana, Mahama seems to be travelling a lot with his work. He was in Dublin for his Ellis King opening and I was lucky enough to be invited to dinner after and actually wound up seated beside him. We talked about how this series is an extension of work drawn from his Masters research, and I got a behind the scenes tour of Civil Occupation via his phone. He showed me pictures of Kwame Nkrumah University of Science and Technology, his college, draped in an earlier version of the piece. He showed me pictures of older, more traditionally sculptural work.

He also showed me videos of the workers he hired to sew the sacks together. He told me how, by handing over control and allowing the workers to define the end appearance, the art retains its political energy. In this conceptual method of working, Mahama is left unburdened by any decorative baggage. Although, due to the work’s physical scale, it’s final realisation obviously yields an aesthetic statement. And aside from the the institutional subversion of this work taking over the gallery, I enjoyed that one singular piece was installed, rather than varous bits of art throughout. It’s been a long time since I’ve seen an artist be given the opportunity in Ireland to have a show like this. That this art is being shown in a ‘young’ gallery is worth mentioning. 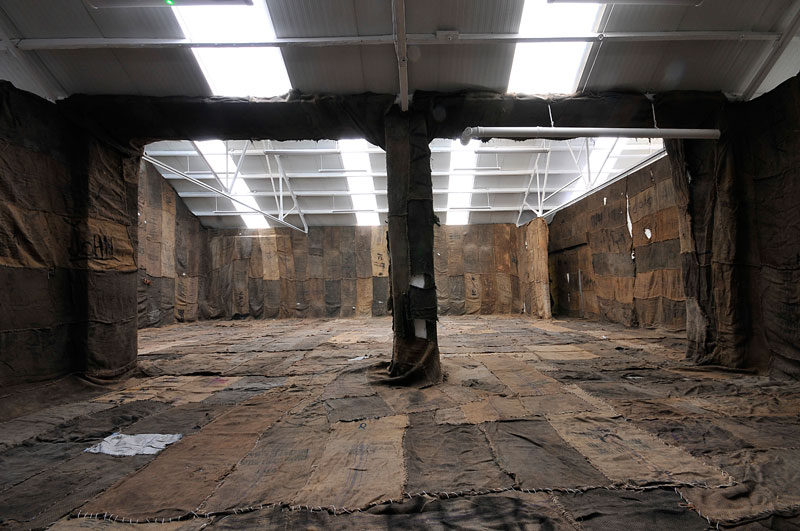 Also aesthetically, the draping of this fabric is interesting. Drapery is a constant throughout Western art history. It is depicted as backdrop, discreet cover up, support; as clothing, adornment, a sign of wealth, a complimentary space filler. But here, in Civil Occupation, a shift in perspective happens. What has been kept in the background becomes the foreground, similar to how a spotlight is put on the labourer. I’m wary of having to discuss or relate African art in terms of Western art, but I personally enjoy this contrast. Like the sacks, there is another history of alternative reference points.

Before arriving I had seen his fabric pieces draped in public spaces such as markets, bridges, abandoned railways online and was curious to see how Mahama’s work would be displayed inside a gallery. How would they physically inhabit the space? What sacrifices to the work would have to be made? How would the work hold up removed from its organic environment, where they reacted to social structures, rather than critiquing art world structures? On the one hand, this issue is avoided by the sheer scale. And on the other, this particular context allows it to be given the space for contemplative thought. In blitzing the gallery, Civil Occupation holds its own on first impression.

This is the kind of art that is bigger than the artist. It is political art. The wider themes approached are those of capital, commodities, labour, class. But specifically, Mahama is concerned with the layers of people who allow capitalism to happen. We can easily forget to be aware of the labourer, as often we do not see them, caught at the bottom of social structures. The way Mahama sees it, the process, and the labourers involved with the process, are the dialogue, and cannot be separated from the object.  It is the labourers who keep things in motion, allowing for development and transformations of raw materials, creating wealth for others. Civil Occupation is reminding us of their presence. Thus, he addresses social awareness, in this case a very localised example, but in a varied and adept way. 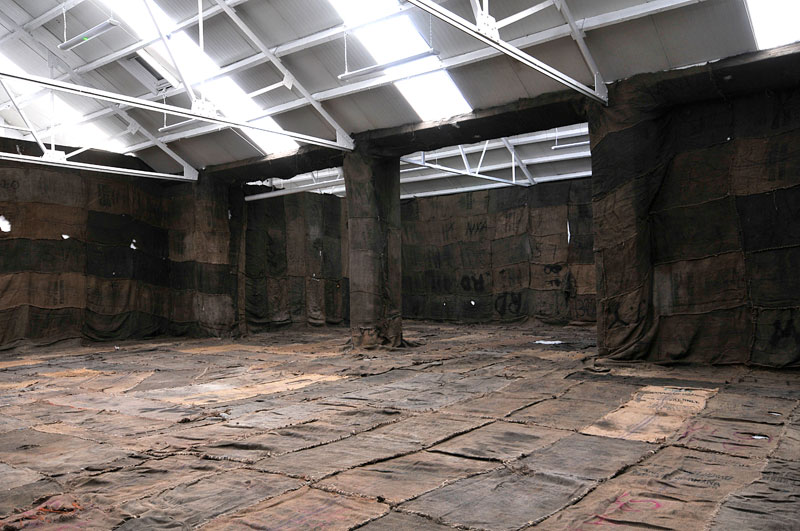 I genuinely liked this show and I’m very glad I saw it. Ibrahim Mahama’s integrity, process and strength of voice were gratifying. Civil Occupation struck me as a visually memorable and thoughtful show. I’m always going to be glad to see a gallery in Ireland show art that hasn’t been made by another overrepresented, middle-class caucasian person (yes, that is a dig), but that’s not always going to make me like the art. The point is that it’s important to see more, to step further away from the familiar and then further away from that when it too gets familiar.