Out the hole, around the tree and back in again, Graduate Exhibition 2014
Avril Corroon
National College of Art and Design, Dublin
14 – 22 June 2014
Review by Eoghan McIntyre

“There are times when even the most potent governor must wink at transgression, in order to preserve the laws inviolate for the future.”1 – Herman Melville

Transgression alludes to a stepping over, going beyond, the breaking of a convention or boundary. In its most basic sense transgression is the rejection of perceived rationality, an attempt to reveal the absurdity of what is considered to be reason. Analysing the relationship between transgression and art presents the opportunity to examine art’s pursuit of renewal and the interrogation of societal constraints. In her 2014 degree show exhibition Out the hole, around the tree and back in again Avril Corroon plays the part of a parrhesiastes2: willing to take risks, for herself and for the institution she works within, as part of a refusal to automatically accept order and stability. 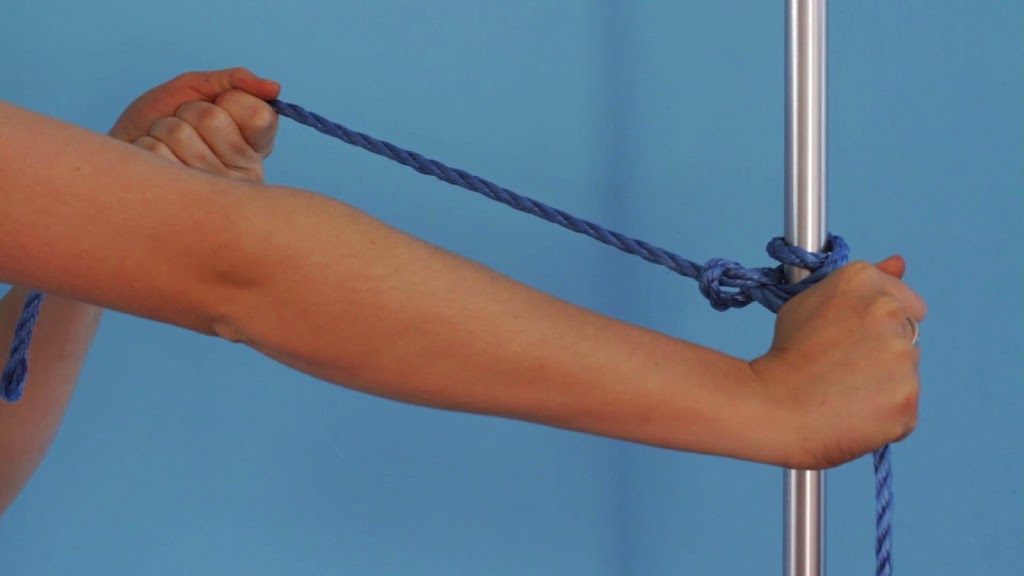 The work takes its title from the method of tying a bowline, a knot known for its strength and security. The knot’s resilience can test even that of a ship’s sails – the sail will tear or split before the knot will slip. Corroon’s work is both figuratively and literally connected to its site of installation and, similarly, provides a test of the structures it is bonded to. How will the art school respond to transgression, tension and discord?
A blue rope, one hundred metres long, spans from a flagpole in the campus of the National College of Art and Design (NCAD), through an upstairs window of the nearby John’s Lane building (where graduating Media students exhibited) and is tied at the end of the room. The floor of the space is almost entirely paved with bricks, which is the work of another artist in the room – Kerry Guinan3. As the two artists collaborated in organising the space, I will briefly discuss how the works interact.
The walls of the room are blue, and the reasoning for either painting or leaving them this colour can be found through looking at the two shows together. Both shows share dissonant sensibilities. Thus these blue walls can be seen as a refusal to yield to what Smithson calls “a submission to the neutral”4, what he believed to occur to art that comfortably is placed in the white cube.
Immediately it is noticeable that the rope is an impediment to the viewer’s ability to navigate the space; it must be ducked under to get from one side of the room to the other. Outside the room a video piece details the construction of the work (the tying of the rope, the securing of the flagpole) and shows previous antagonistic works by the artist. The viewer sees her climbing an off-limits ladder in NCAD and a previous project in which a rope was tied from the artist’s apartment to the NCAD campus.
At just over four minutes long the video is brief but, through her narration and choice of footage, clearly details the relationship between student and art school. This relationship is marked by change, as shown by her two projects in which ropes are tied across the NCAD campus. Over footage that shows a rope tied from her apartment to NCAD Corroon narrates “one hundred metres of rope tied from the art student’s apartment…to the art school NCAD. But I’ll get caught.” At first she acts without the permission of the institution and an awareness of the consequences. Subsequently the work is taken down: “the rope gets caught-cut.” For her degree show piece “permission is granted to reach higher than the third floor…a mast is built.” Instead of operating outside the institution she plays by its rules so that the work is allowed to be shown.
These actions show an awareness of the difficulty of critiquing the art school from within. The art student is an agent operating within a structured system. Consequently the institution acts as an external force which both allows for and restrains certain actions. The student must create work, use the college space and engage with tutors. If these conditions are not fulfilled the student will find it very difficult to succeed in an academic system. This restriction can also act as a virtue. In an interview in 1972 Smithson called for an “investigation of the apparatus the artist is threaded through.” The art student then has the ability to begin this investigation at their very formation as the artist begins their journey through this “apparatus”5. This inquiry is executed through interrogating what makes up the art school; faculty and curriculum. 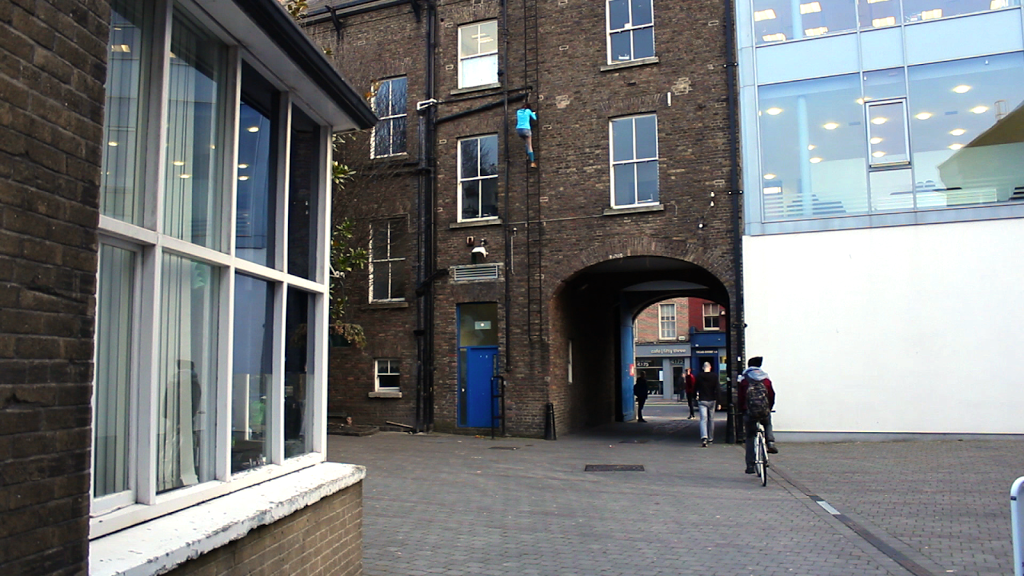 In her video piece, Corroon shows a personal engagement with college staff, for example knowing the head attendant’s predilection for rock candy and purchasing some for him from Liverpool, and knowing which train a staff member on the third floor office gets every morning. When the artist climbs the off-limits ladder the attendant leaves his office and, instead of immediately telling her to climb down, he calls her first name repeatedly until it becomes clear she isn’t stopping. It can be assumed that the attendant thought that letting Corroon know that he had noticed her, she would stop.
Herein is a site of discomfort in the work. Is the engagement with the institution shown and the relationships built purely in service of critique? For she clearly builds a relationship with the attendant, but her actions put them both at risk. This is a current running throughout the work. It is obligatory to use the college space, but the extant architecture that is out of bounds is used. It uses a sensual aesthetic, using azure as a repeated background motif. The use of this seductive veneer is jarring in juxtaposition with the antagonistic actions at play in the video. I would imagine this is not how the college would like these events documented. Corroon may not be granted approval for her actions, but she decides on their presentation. This gives the art student a sense of self-governance in a system that limits their freedom.

To make provocative works that antagonise the institution only later to exhibit a fully authorised show displaying them may create the idea that her actions were futile. Instead it is a part of a process of engagement and withdrawal that must, necessarily in an academic system, end in engagement. Her attempts to act independently of the institution are prohibited, but they are given meaning beyond being merely infringements as they become harbingers of the restrictions art students are bound by. Her actions (climbing the ladder, the first rope project) and the confines they break are dependent on one another for their meaning, as a limit does not exist if it is impassable and transgression is pointless if the limits it crosses are unreal.
The art student is at the mercy of the faculty as they decide upon the curriculum and the restraints on student’s behaviour. In terms of the power they possess the faculty far outrank the student and, accordingly, some faculty seemingly demand of the student only what will allow them to maintain their elevated position. For the art school to function as a truly creative space there must be a modicum of dissension and discord, but this critique must necessarily come from within. The institution is in a position of power and, as Foucault puts it:

Power must be understood in the first instance as the multiplicity of force relations immanent in the sphere in which they operate …which, through ceaseless struggles and confrontations, transforms, strengthens, or reverses them; as the support which these force relations find in one another.6

Corroon’s show is a part of these struggles and confrontations. One purpose of the art school is not only the production of knowledge, which is compiled and displayed, but also the marketing of this knowledge. This show signals a certain discomfort with this situation. The static separation of tutor, students, attendants and staff is likely to be accepted and kept invisible as long as open conflict is not created. But for Corroon equilibrium is needed, that of opposition and conflict, with engagement and agreement. The American poet Anthony Hecht states that “controlled disorder labours to keep art from being too refined.”7As a lucid investigation of an academic system that controls and supports artistic practice the show is convincing evidence of Hecht’s idea. 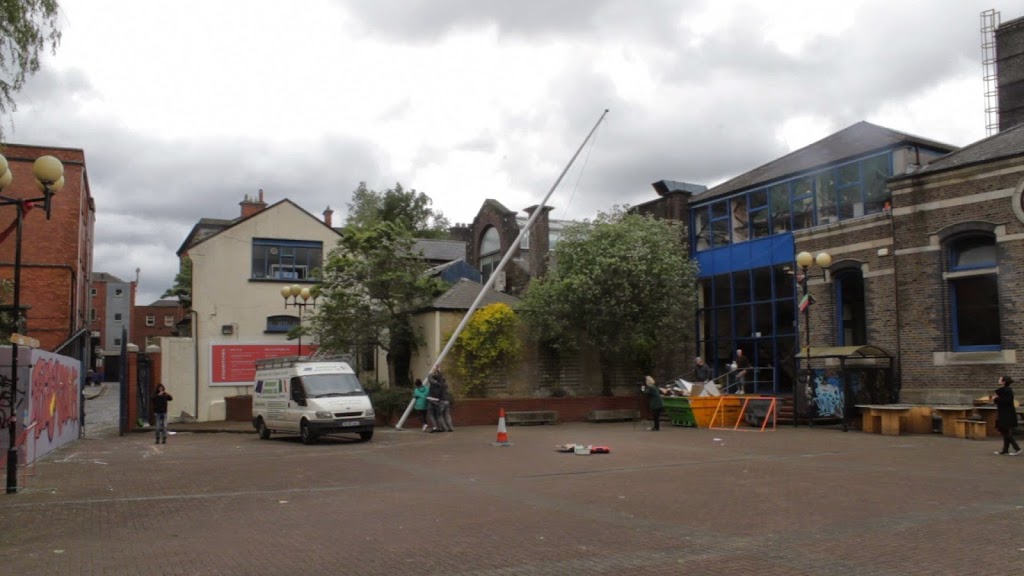 Out the hole, around the tree and back in again is intrinsically bound to the art school and its success is in the stress, fissures and fractures that this connection causes. When her first rope project is taken down Corroon reports that a staff member says “There’s something umbilical about it.” Though her actions antagonize the college he is employed by they can still be aestheticized: a rope tied across NCAD and then being cut down becomes the nascence of a new set of limits, a new opportunity for the institution to redraw their boundaries and reaffirm their authority. But such a response is the aim of Corroon’s mischievousness: she has broken rules and then showcased it. As Corroon graduates and cannot continue this interrogation she leaves a permanent symbol of her dissension: the flagpole that is (as she states) “secured to the foundations of the art school.”

1) Herman Melville, The White Jacket, or The World on a Man-of-War (Oxford, Oxford University Press, 2007) 336.
2) “The Parrhesiastes is the person who says everything. Thus, as an example, in his discourse “On the Embassy,” Demosthenes says: It is necessary to speak with parrhesia, without holding back at anything without concealing anything.” Michel Foucault, cited in Freedom of Speech: Importing European and US Constitutional Models in Transitional Democracies (New York, Routledge, 2014) 88.
3) A longer review of Kerry Guinan’s degree show piece Beneath the Paving Stones can be found here: http://papervisualart.com/?p=10536
4) Cited in Gerald Raunig and Gene Ray (Eds.) Art and Contemporary Critical Practice (London, Mayfly Books, 2009) 24.
5) Cited in Ron Graziani, Robert Smithson and the American Landscape (Cambridge, Cambridge University Press, 2004) 141.
6) Cited in Stephen David Ross, The Ring of Representation: Negotiating Identities, (New York, State University of New York Press, 1992) 70.
7) Cited in Anne Whiston Spirn, The Language of Landscape (Yale, Yale University Press, 1998) 189.

Images courtesy of the artist.