As the end of Alan Butler’s solo exhibition, The Parallax View, loomed, on impulse I bought a same-day return ticket from Dublin to Limerick. Up far earlier than usual to catch a 10 o’clock, and in a half sleep, half caffeinated delirium, I decided to perform.

The performance took place on Twitter. I declared a very self-reflexive, so much meta, self-aware, double irony Live Tweeting of my v important trip that day. A few tweets in I declared the need for a hashtag.

“In this exhibition, the artist interweaves pieces from the collections with new works that have been produced through the outsourcing of labour to individuals and apps online, at various stages of the creative process.”

The artist OR curator has used other artworks by other artists (University of Limerick Collection) in this exhibition. #triptoparallaxview

From what I understand Brown constructed the plan and got both parties on board, then worked closely with Butler in the selection and production process. Srsly exciting stuff really. ULAC isn’t something I previously knew anything about, although I’m not surprised at their existence. Butler’s work is something I know a bit about. Old meets new, in actual fact. 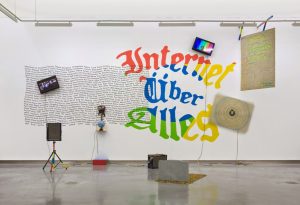 But Alan Butler’s work isn’t something I’d find terribly easy to describe either. It is loud, colourful, borderline obnoxious, usually has some type of massive wall sticker installation, topical, current, often something is spinning, almost exclusively uses the internet to source information and often to produce results, is preoccupied with the cyber-political, and, I’d add, it is all done with a slightly jaded anarcho-comic bent to it all.

On Butler’s website there is a single text which towards the end says this about his work:

After several attempts to track down the English version (Butler suggested I enroll in evening Korean classes) Google told me Lane Booth [sic] of Temple Bar Gallery & Studios wrote the piece and that the above approximately means:

“With the ubiquity of the Internet in the work of the author shows that it also omnipresent in our lives living in developed countries are. The internet is now recognized as essential to both industry and daily life, like electricity or running water, so for Butler is actually asking whether we really free to use information gained as much as we think, makes us ourselves, so a lot of information You mean one gajyeoseo is doing? “is wondering.”

Aside from gajyeoseo, I get the gist. His work isn’t about the internet, but an incidentally practical product of it.

The title of @alan_butler‘s show, Parallax View, is borrowed from a Slovaj Žižek book. #triptoparallaxview

The Parallax View is also the title of a 2006 Slavoj Žižek book. Žižek ambitiously tries to update dialectical materialism or at least lend it to contemporary politics theoretically. Both Butler and Žižek are referring to the effect that occurs when an object is viewed from different positions. Most commonly this term is used in photography, usually with a viewfinder camera at close range, to describe the gap between what the viewfinder sees and what the lens is capturing. Or with film/video, as the viewpoint moves from side to side, the objects in the distance appear to move more slowly than the objects close to the camera.

There are other examples: in astronomy stars have different relationships to each other as the Earth moves in its orbit, but in general parallax is a difference in the apparent position of an object. It is this gap, this different perspective, that Butler is ultimately describing with his show. I think it can be further interpreted as a gap in time, highlighted through technology, with which the artist is playing.

Ormston House itself is an elegant showroom from another epoch. A central square column, a pier, rises to the lofty ceiling above. Mirrors adorn its sides. Large windows showcase the gallery off of one of central Limerick’s main streets.

At the gallery entrance we are greeted by a desk and body behind it. A temporary wall has been built, partitioning the normally open and capacious space. It leads us through a short, narrow entrance passage. We know we are in an Alan Butler show because in this passage there is an inexplicably large wall mural sticker featuring piles of iPhone 4s. Only the backsides are revealed, perhaps hinting at the camera functionality of this ubiquitous device. A more traditionally sized digital print is hung on top (a Martin Parr remake it turns out). Much is happening in it, I am curious, so walk on into the main space.

He selected works from the ULAC I’m guessing for the anticipated political, visual, and, occasionally, personal potential in making his knock-offs. Thin banners drop from the ceiling. Historical paintings hang. Videos play. Sculptures spin. In the back corner, the curators curate next to a large space heater. 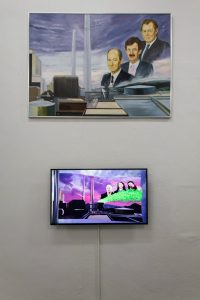 Pairing the dusty collection with new solutions available from sites like fiverr.com or by emailing a painting factory in China, Butler is making comparisons. A video collage based symbolically on a very Socialist Realism style painting, complete with glorified industry and presumable ‘leaders’ plays centrally. There is another video with tweets about Damien Hirst, a work he couldn’t borrow. An Adobe Illustrator ‘how to’ YouTube video is placed aside its inspiration: a Hokusai print. Old Japanese Kimonos hang side-by-side ‘all over’ digitally printed t-shirts, rainbow covered in emojis. These clothing ‘resemblances’ are the biggest stretch in the show, and I don’t think they work as artwork (although pretty damn cool just as t-shirts).

Something about #kimonos and #emojis by #alanbutler @ormstonhouselimerick #triptoparallaxview
A photo posted by Jim Ricks (@therealjimricks) on Jan 21, 2015 at 6:39am PST 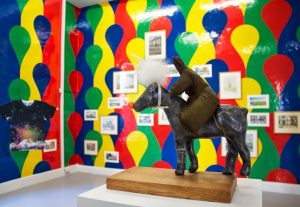 The Siobhán Hapaska is one of the few contemporary pieces selected from ULAC. Its mixed materiality lends to interesting interpretations. The original has a stuffed bear(?) on the back of a clay reindeer, which bears a fuzzy puff-ball hat and a red nose. Butler 3D scanned it twice, once through a display case, and 3D printed it in a synthetic bronze plastic. He positions Hapaska’s high on plinth some distance from the new versions. These spin, placed below eye level, and we are free to observe all sides easily. It is a study in distortion. Soft materials reconstructed as solids. Limitations in how the 3D scanner ‘knew’ the original are revealed in both takes. 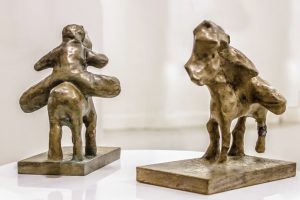 But Butler’s corner installation steals the show. Working from the same methodological premise, but with an encompassing exactitude. This piece TF;DG (Too Far; Didn’t Go) summarises the entirety of the show’s concept perfectly. Butler has installed one of his signature vinyl wall sticker pieces. Broad stripes of the Google colours of red, yellow, blue, and green ascend to the ceiling, the iconic Google Maps pin is placed in a rhythmic pattern forming a lurid wallpaper that wraps around the corner of the recessed gallery nook.

Scattered across the Google field are a number of pairings, 13 to be exact or a total of 26 works. A painting of, almost exclusively, Dublin is paired with a watercolour, made in China, of a Google Maps screen grab of the same location. Taking landscape works of unknown historic or economic value and filtering them through Google’s literal lens and then again through the hands and eyes of an anonymous factory worker (artisan?). The layers add up. The title has sarcastic bite (especially considering the fact that many of Butler’s Dublin peers would have not made it to this Limerick exhibition). And it is an apt portrait of today, at least in the Developed/Post-Modern/First World: technology’s screens provide a surrogate reality to the global privileged, and actual production of goods has moved to, and created a new reality for, the former/semi-colonial world. 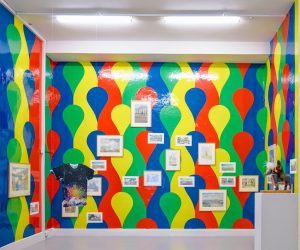 The show is essentially an exploration of divergence through market exchange. And while through the constant comparisons and translations new contemporary ‘accents’ come through, it should be said, and just to be kinda critical, the selections of works in ULAC and the imitative responses Butler created seem repetitive and arbitrary at times.

Early indications point to the show being “a successful” and “good” one. #triptoparallaxview

The Parallax View was diverse and utilised heterogenous strategies for outsourcing and producing imitations from an interesting, under-resourced University collection. The overall visual style was immersive and invigorating. It was accessible in its use of popular references. The Parallax View conquers the unwieldy, glassy, and high ceiling-ed space of Ormston House. And significantly, it was fun, covering a range of mediums and solutions to the ‘problem’ Niamh Brown and Alan Butler set forth.

The varied strategies to reproducing the collection knowingly yield flawed and foibled knock-offs, all filtered through the lens of Butler’s outsourcing and political knowledge. It is cheap, crass, and cheeky, and I mean that in a good way. It is also the kind of idea that has legs and could go on forever, but I also hope it doesn’t.

Definitely not TF; and I Did Go. And I did very much enjoy my #triptoparallaxview.

Looks like another on time @IrishRail train. The #triptoparallaxview was a-OK. Its a wrap everyone. Thanks.

Photos courtesy the artist and Ormston House unless otherwise indicated.