The mutilated remains of a Bog Man cover the gallery floor. The gallery approach becomes a medical observation deck, affording a view of the downstairs installation from above. In full colour, Sam Keogh has enlarged a photograph of the two millennia old Irish ‘Old Croghan Man’. 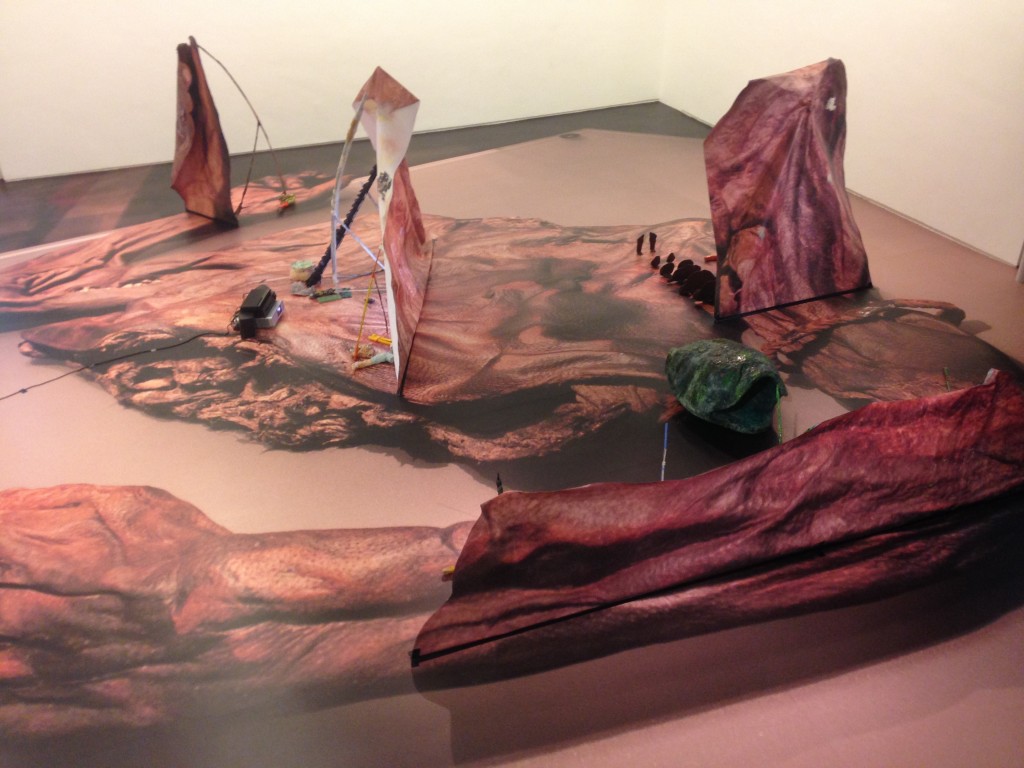 Coming down, the iridescent tanned skin of just a ragged torso, arms, and hands is to be walked over. Four sections of the image are peeled and propped up with decorated bone-sticks.

These in turn are anchored in place by garish ceramic blobs. Other sculptures litter the floor: a psychedelic life sized ceramic CAT Scan cross-section, miniature frozen Han Solos. Found objects (a rubber fly, a skeleton, miniature turtles) are inserted sporadically. There is also giant green heap of a tortoise shell. This lurid frenetic manufacture is characteristic of Keogh. An embrace of clumsiness and impulse, coupled with adept craftsmanship. 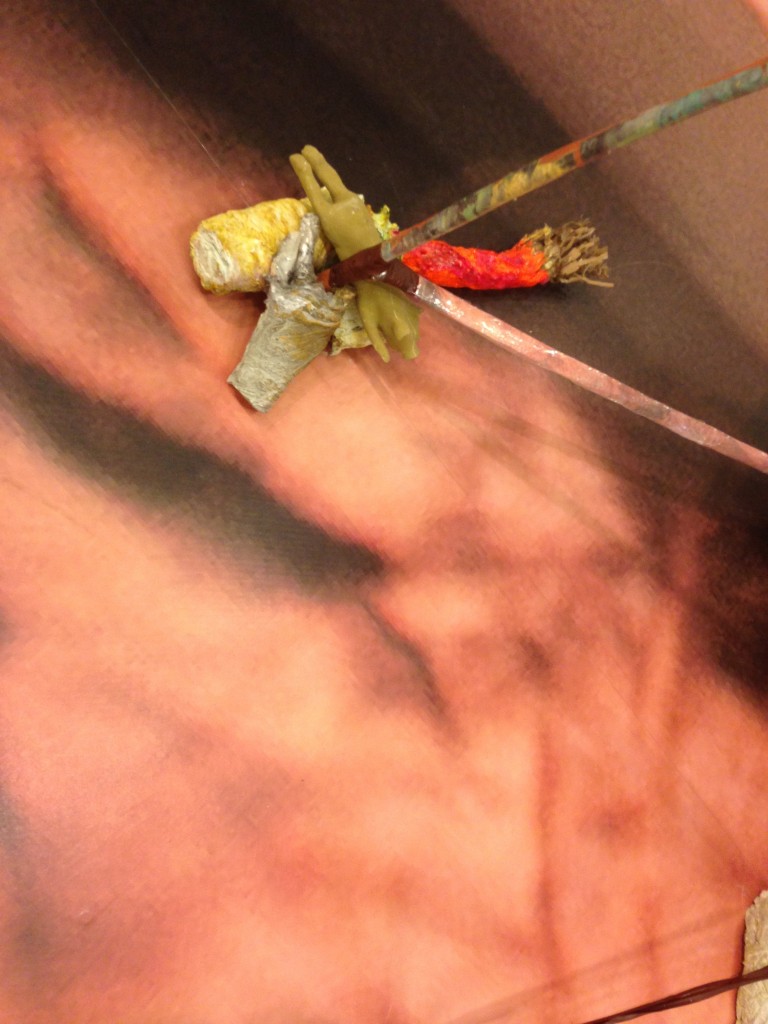 The backs of the upright sections of ‘skin’ reveal clusters of ziney Hirschhorn-esque collages. Bodies and statues and skeletons and knives and family pictures. But mainly bodies. And one cluster is dedicated entirely to turtles. It is collaged imagery by association, of the sorts of things that may occupy the minds of tween-age boys. I’m reminded of the gory 1978 Faces of Death. These cumulative references point primarily at the autopsy of found ancient bodies, the ‘scientific’ manner in which they are displayed and viewed, but also perhaps to the original sacrifice itself. He is revealing his hand, the research is poured into the installation like pigment.

A video is projected quietly onto the reverse of one of the four skins. All is revealed.

Keogh has cleverly designed this exhibition, the opening served as the performative unveiling of a monumental pop-up book. With microphone and GoPro attached to his chest we virtually live this out on repeat from the artist’s POV. The viewer is placed close to the artist’s body, intimately experiencing this performance.

As he enters and descends on the opening night, none of the four folds have been propped up yet. He begins a frantic erection. Working like a surgeon turned shaman, he picks up an arm, a hand, and hoists them like sails. Each revealing a messy collection of ideas underneath. Picking under the skin, only his gesticulating arms and legs visible on screen in a hurried comic dance. He is breathless.

Once all are upright, he begins to recite, quite rapidly in his Wicklow accent, a stream of consciousness account… of something. His arms conducting, pulling forth narratives from his collages. The imagery and notes are his cue cards. In his muffled voice Keogh is recalling a film. He acts out with sound effects, taking on all the characters. He unexpectedly stops and runs to the next fold of digitally printed vinyl fabric. Another collage triggers another narrative fragment. Is he describing an autopsy? Or a sci-fi film? Hands, latex gloves, mummification, knives, a history of a Bog Man, and intermittently: the gross imitative noises of flesh, of guts.

Suddenly he crawls into a personal history, and literally into the faux tortoise shell. He dwells on a childhood recollection of Teenage Mutant Ninja Turtles, then suddenly ejects himself. He spirals out, tangentialising. The result is a morass of ‘hyperlinks’ and I feel like I am looking at the flat screen of someone else’s search history.

After 40 minutes he leaves us with his installation.

Crawling through this Brobdingnagian Bog Man like a human fiber-optic camera, picking under his skin, Keogh examines and animates the body. He overtly suggests that crude displays of ancient bodies are an unexamined ethical issue. A psychological autopsy is experienced, but it is awkwardly arbitrary. He craftily utilises performance as an active device to install, and to leave a compelling document. But in despite of everything I like about Four Fold, he doesn’t really get below the surface; under the skin. He has pored over unmistakable materials, but I am left wanting more meaningful content. Linkages and moralism just don’t cut it.

At the start of his performance, Keogh walked into the crowded gallery much the way any visitor might, except he broadcasts motor noises for several minutes. And then he declares, I think, “Very flat”. 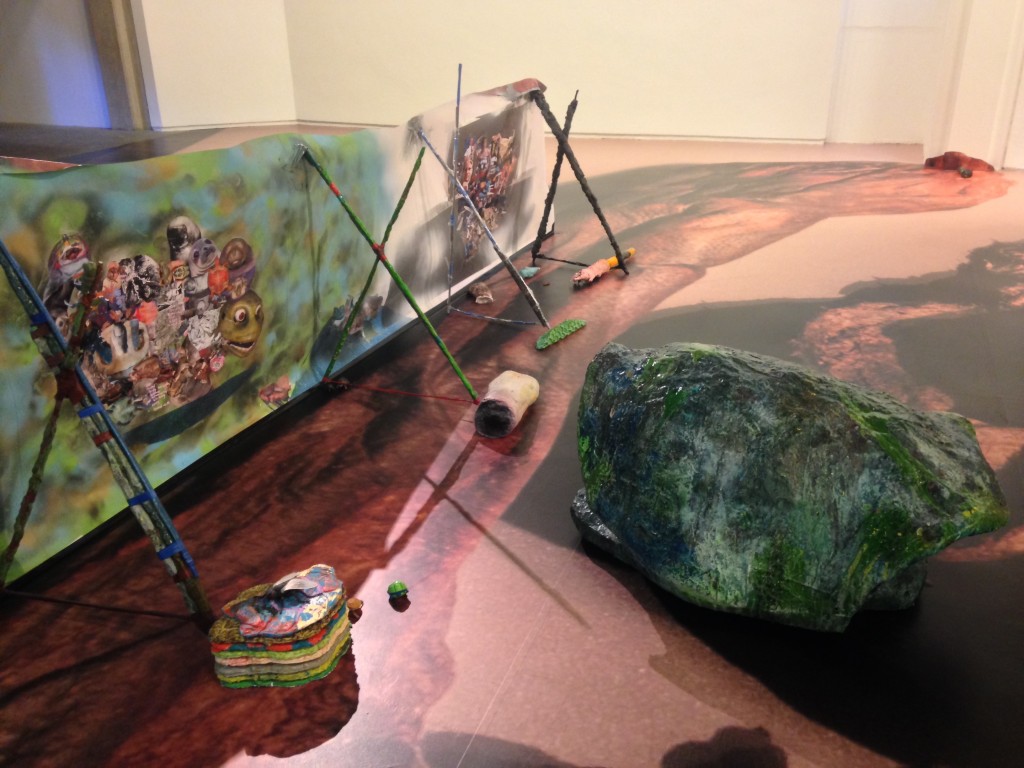