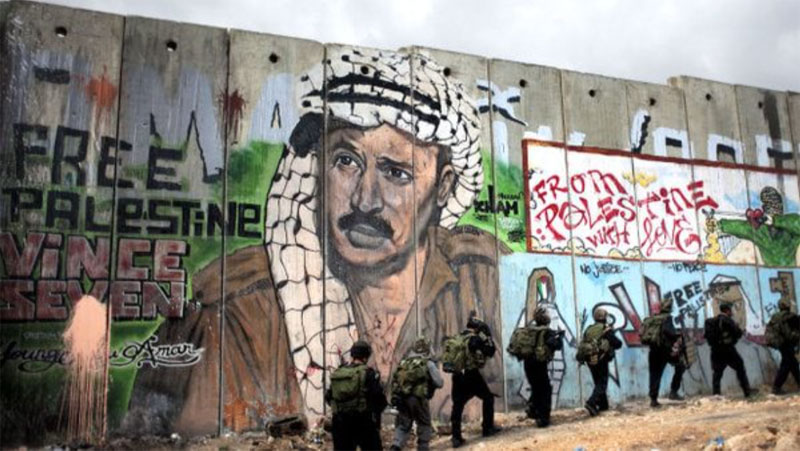 There is no doubt that the Apartheid wall is a very tempting drawing surface for graffiti artists, only if it wasn’t positioned in such situation. When contemplating about this issue – taking into consideration the presence of the apartheid wall and the message it represents- one can learn that any act of drawing on such a surface would only beautify it to an extent where dealing with the Apartheid wall’s existence becomes natural and acceptable to the viewer’s eye making it also mentally acceptable. For example, if we to take Yasser Arafat’s graffiti piece – on the apartheid wall on Qalandya’s checkpoint- by the artist “vince 7”, it is beloved and highly liked by the public, which means that the surface (Apartheid wall) became implicitly acceptable by the public. Therefore, any graffiti work drawn on this surface serves as a validation and a confirmation of the walls’ existence, on one hand. On the other hand, the Apartheid wall does not belong to us – the Palestinians- rather, it is a cancerous tumor, and any work of art on such a tumor is only cosmetic. To bring the picture closer to mind; imagine when one paints a rose on a cancerous tumor eroding his body!

Moreover, the implications of any messages on the wall will not be exposed to the right

recipients – who, in this case are the occupiers on the other side of the wall- even if the messages were slogans attacking the presence of the occupation, they are written or drawn on the side of the wall that surrounds the West Bank, while the other side of the wall is completely clean and the presence of the wall as an Apartheid wall is not reinforced by visual messages, despite overlooking the collective Jewish consciousness that is being marketed by the Zionist entity, the idea of the wall exists, however, in a different manner than it is currently here. The different idea of the Apartheid wall arose specifically in Europe among the Jewish communities, which were called ” ghettos “, back then the walls symbolized a mean of protection and isolation for the Jewish communities from the European Christian community, with that said, the other side of the wall deals with its’ existence with great neglect, or let’s say its’ not dealt with it at all. Additionally, if one was to make a comparison between prisoners dating, documenting and counting their days and a Palestinian living in the West Bank, it might be correct to an extent regarding a certain aspect, although (in my personal opinion) such comparison – in other aspects- is far from accuracy and objectivity since the only space exposed to the prisoner’s eye is his own cell’s wall, versus the many walls in the Palestinian cities, villages, and refugee camps under the collective imprisonment which in its turn contributes in binding our identity with a cement surface constructed on our land against our will.

Graffiti is a street act, whoever has the talent can shine it on the walls, and such an act doesn’t make him an artist as much as it makes him a citizen with a reaction taking a form of a message. It can be said that artists are intruders on such an act. If the massage started fading from the art work, or if the art work itself was placed in an art gallery instead of the street, it will lose its’ main concept as an act of revolution and will only contain the visual message.

One can point out that the similarities between the Apartheid wall and the famous Berlin wall – that separated the socialist bloc represented by East Germany with Berlin as its capital, and the capitalist imperialism represented by West Germany with Bonn as its’ capital – are similar by the name but not by the concept. Consequently, the reasons behind establishing the Berlin wall have their own political determinants which are based on the rules of the Cold War between the two poles of the world at that time. Moreover, the Berlin wall separated people from the same flesh and blood, let alone its height in comparison with the Apartheid wall.

This point of view might not be generalized among the streets, nor upon a person spontaneously holding a spray paint can unleashing his or her fury with slogans and terms against the Apartheid wall, but at least such point of view can be brought out to those international graffiti artists who pilgrimage to our country to support our cause, in this case their art work should be on the other side of the Apartheid wall were the establishers would be able to see it. At last, I do not intend to mention the source of the cement or the labor as much as I intend to mention the decision makers who took the initiative to establish the Apartheid wall in the first place.

On the sidelines of graffiti on the Apartheid Wall