There are very few exhibitions that I feel such a draw to see multiple times and the need to bring other viewers along to – …alarming …invasive …a violation …lawless …disrespectful – the first solo exhibition of the London-based, Norwegian artist Sebastian Lloyd Rees in Ireland, was one such show.

With Sebastian Lloyd Rees we have an artist who is interested in effect and the histories of effect. His work as part of this exhibition is deeply rooted in the themes of conflict, inequality, violence, political uncertainty and humanity at a time of great divide between the East and the Western world. 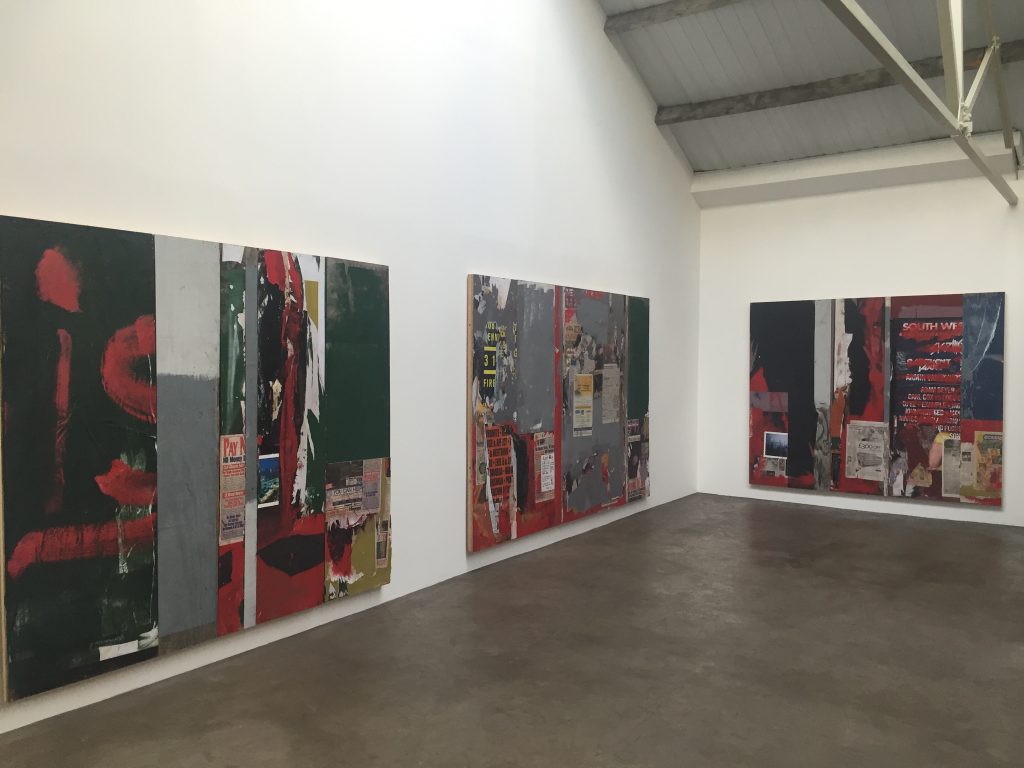 Lloyd Rees is attentive to how events and the aftermath of events come to be known through the media. Having been fortunate to meet the artist at the opening of this exhibition at Mother’s Tankstation, we spoke at length about the works and the concepts informing them. 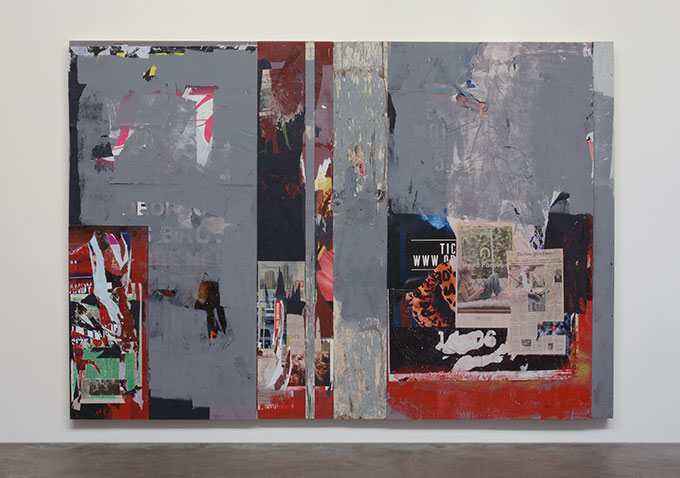 The five works on display, each entitled All the News That’s Fit to print [2001.09.12 – 2015.08.1], sit somewhere between ready-made and construction, sculpture and painting. They fit within what Rosalind Krauss has deemed the “post-medium condition.” David Godbold, of Mother’s Tankstation, informed me of the journey from raw material to finished product. The works are repurposed plywood hoardings taken from sites around London and Manhattan (those panels painted blue originate from the East End and those that are green come from Manhattan). Following acquisition they are cut and montaged, sometimes over-painted but often keeping their graffiti, bills and postings attached whilst Rees – or more correctly his studio assistant, his nephew – will paste new material onto the hoardings now removed from public realm. This process is an attempt by the artist to distance himself from the work. This material mostly consists of newspapers, both with articles in English and Arabic. Lloyd Rees is interested in the way we view what seems banal or that, as Heidegger says, “withdraws into the background” – what becomes taken for granted or passed without much notice. By placing these works into the gallery space, Sebastian Lloyd Rees changes how we see these hoardings-cum-artworks. They stand large, low to the ground, brooding, demanding attention. 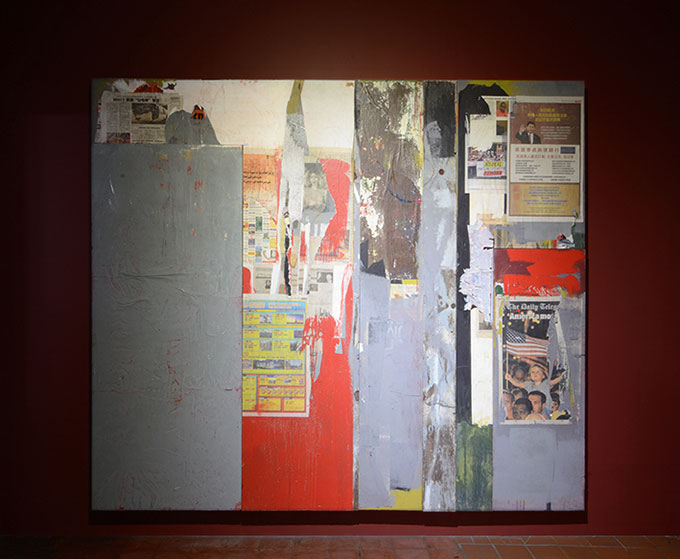 Sebastian Lloyd Rees is drawn to American culture and the increasingly globalised view of the world it represents. Rees takes as his starting point, what he calls, the “12th of September” – the day after 9/11. He refuses to represent or present the events of the day, on the day and by doing this he allows us to conjure up our own recollections of the tragic event. Ever since, Downtown Manhattan has been in a state of rebuild with such sites being enclosed or hoarded off by similar structures that form the raw material of Lloyd Rees’s work. As a result the physical means of production is linked directly, geopolitically to their concept. 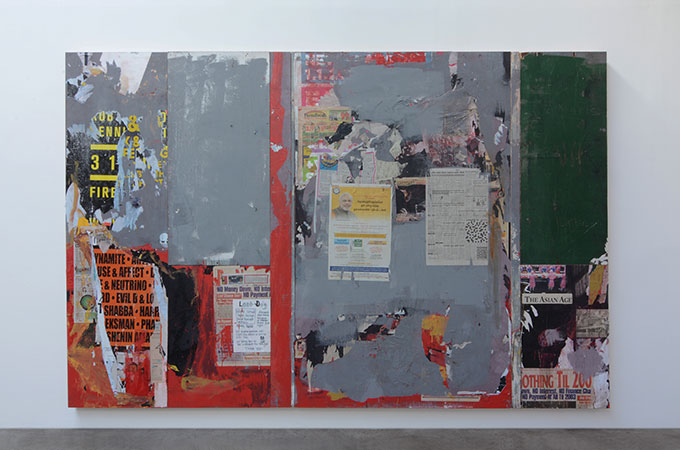 A great deal has occurred within the given time frame encapsulated by the work’s title. We as consumers of television and print media have seen or read the developments occurring over this stretch of almost 15 years, including: The invasion of Iraq, the fall of Saddam Hussein, the London bombings, the death of Bin Laden, the Taliban, the rise to prominence of ISIS, and the multiple humanitarian crises in the East.

The endpoint for this series of work is the 1st of August 2015. Taking the initiative, I decided to see what the UK national broadcaster saw as newsworthy. On this day, the BBC published its week in pictures. Alongside a Nascar and ecstatic looking Stuart Broad, the England cricket bowler, we see a photograph of Syria. It shows just some of the extensive damage caused by conflict that has resulted in the largest humanitarian crisis since WWII. As Susan Sontag feared when she wrote On Photography in 1972 we as a people, as a human race have become to a greater degree desensitised to violence through the reproduced image. The television screen and the lens distance us from the human suffering that we see. By alluding to acts of violence and conflict that create the plateau of inequality and unrest, Lloyd Rees forces us to think about the newsworthy events of the recent past in a subtle and nuanced manner. It is an impressive tactic rather than simply portraying events at face value, the concept underpinning his thinking sticks much longer than an image would – especially within this age of mass consumption and reproduction. 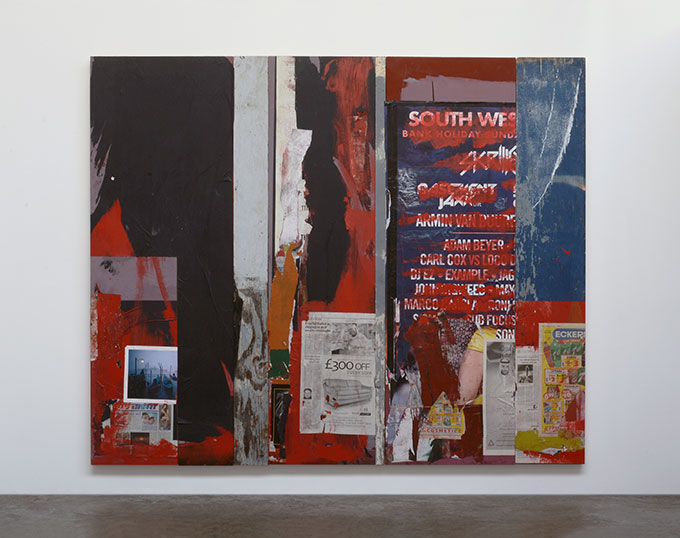 The power that these works possess comes primarily from their subject matter but also through their scale, all 200cm high with varying lengths from 231cm right up to 306cm. They reference the time of Abstract Expressionism but are not deduced from the movement. Rees greatly admires Jackson Pollock, Willem de Kooning and Barnett Newman. The influence of Newman’s aesthetic is especially evident in this artist’s use of the vertical. What we are presented with is something new, of our own time, something of the now – The affixed dated newspaper article capture and store an amount of real time, of lived experience.

Sebastian Lloyd Rees is an artist who is very talented at making the industrial look beautiful. The works are arranged in such a painterly montage that transforms their harsh exterior reality into works of art that are aesthetically and viscerally appealing and intriguing. As an artist Rees has lived up to Pollock’s belief that the artist must “find new ways and new means of making their statements…the painter cannot express this age in the old forms of the Renaissance or of any other past culture.” 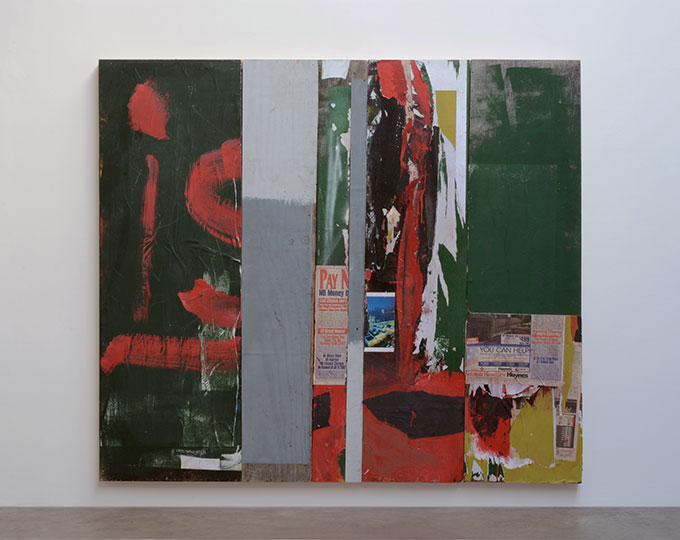 This exhibition was a very successful Irish debut for Sebastian Lloyd Rees and Mother’s Tankstation have again shown themselves very worthy of praise for their continued presentation of boundary pushing Contemporary artists. …alarming …invasive …a violation …lawless …disrespectful has and will continue to stick in my mind.