The title of the exhibition curated by Mary Conlon refers to an experiment conducted on the moon in 1971 to demonstrate Galileo’s counter intuitive assertion that without air resistance all objects fall at the same speed. But the words hammer and feather also suggests sets of oppositions beyond light and heavy, such as light and dark, natural and manufactured or organic and mineral, which might also be invalidated by physical laws, gravitational or otherwise. Variations around titles and artworks is a recurring theme of the exhibition 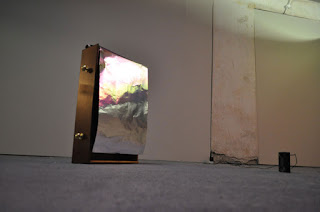 Just how unpredictable words might be is suggested in David Beattie’s photograph White Light of a hand gently scooping a prism as one might a feather, which was used for the invitation. It is another kind of light that Beattie staged for Perpetual Light where a dismantled LED advertising sign is placed Flavin-like in a corner and goes gradually on and off (perpetually?) lighting up its little portion of the world. The minimalism of Beattie’s work is not only present in his use of unprocessed found objects and spatial relationships but also in the cause and effect reactions that are ever so slightly set in motion: here for Foil a small fan sways a sheet of tin foil hanging loose from an upturned kitchen drawer, occasioning a gentle rustle; a minimal (and domestic) variation of sorts on Der Lauf Der Dinge 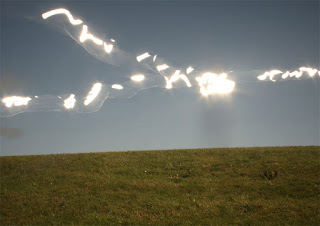 Natural light returns in Clare Lymer’s photographs Illustrating Equilibrium I and II, two large shots of an evening sky traversed by a drawing in light with boreal effects. After some considerations the light figure is revealed as the trace of a mirror catching the evening sun carried by a body whose mass has been elided by the long exposure. The uncovering of the strategy used for the image far from demystifying it, invites meditation on physicality: on the photograph it is the fugitive light caught in a moving mirror that is brightly imprinted whereas the tangible body leaves only the faintest of shadow. 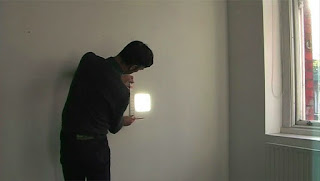 Light and mirror are reconfigured in a more restrained way in Karl Burke video 186.282. It is a long still shot of a wall with a window on the right, on which we follow the trajectory of the sun through the slow progression of its reflection in a small off-screen mirror. At regular intervals a man enters the field of vision to mark the position of the rectangular projection on the wall thus tracing the passage of sunlight. The title, which to my metric turn of mind took some deciphering, adds another note to the work: the light which travels at one hundred and eighty six thousand and two hundred and eighty two miles per second (or about 300,000 km/s) is here embedded in the sluggish move of its projection across a wall. 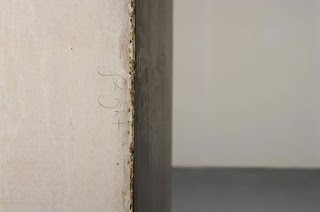 It is a different interplay between the fugitive and the remaining trace that Victoria McCormack engages in Flight: a large digital print show a macro detail of a wall on which ‘flight’ has been pencilled. A brighter indeterminate background conjure the idea of an open space beyond the concrete. The photograph turns out to be an enlargement of the patch of wall next to the print (and the open space another concrete wall). There are several other marks written by McCormack on the gallery’s walls, which mingle with others more ancient on the surface: from construction time or previous exhibitions. The photograph can thus be seen as the permanent documenting of a brief un-witnessed performance. Two drawings on tracing paper by Ann Maria Healy are also a form of documentation relating to a past performance with buckets as magnets or communication instruments but they point out to the absence of the performance rather than substitute for it.

Here something may have to be said about the space itself since it plays such a preeminent role in the exhibition. The Niland Gallery is one of those recently appropriated vacant unfinished commercial unit, which have become such an integral part of the art landscape in Ireland. It underwent minimal restoration to fit its new purpose and is a good example of a developing transitory aesthetic: raw concrete walls crumbling at the bottom, rough painted floors, protruding pipes and electric wires, ground access trap marked by caution tape to prevent tripping; a sort of un-sanitized version of the Pompidou Centre with all functions visible. Conlon fully used the potential of the space subtly intervening on its roughness: painting the clean looking partitions a similar shade of grey as the surrounding concrete, pushing back without taking them out some of the most obstructing plaster marks; she played the walls as a musical part to the exhibition. 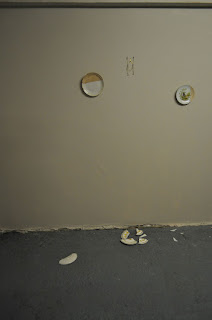 The concrete wall is again an active part of Dana Gentile’s installation Plate Tectonics. A row of plates are positioned with brass hooks over the length of the wall, some of them have crashed on the floor. Given the context, it first reads as a rather straightforward demonstration of gravity; eventually, everything falls down. But in this case, they fall to rise again. A second look to the un-fallen plates reveals that they are themselves post-fall: they are reconstructed from their porcelain and ceramic fragments, the missing parts replaced by carefully adjusted maple wood. They are the combine result of gravity, accident and loving care, which fixed them up with wooden prosthesis. 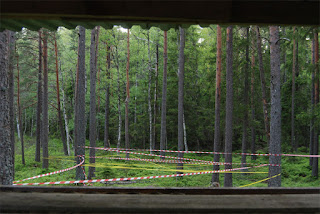 In Tim Acheson’s Field Recording the singing of a bird (which might be a nightingale) forms a counterpoint to the wind blowing through pipes (of hammered steel perhaps) with didgeridoo effect. The bird and the feather naturally come together associating the pipe with the hammer as man-made or industrial; the pipes also interplay with the gallery’s visible tubing. Just as the caution tape on the ground access trap becomes a visual counterpoint to Cecilia Danell’s photographs of hunting shelters in Sweden. The shelters whose function would be to camouflage the hunters from their prey have had their line of sight markedly signaled by crisscrossing caution tape between the trees as a no-go area to whatever moose may be passing by. 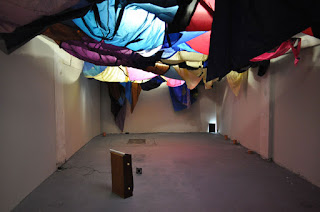 Laura McMorrow’s RC Plinth also plays on contrast with assumed function: here equipping the ubiquitous gallery plinth with a remote control system. It is an ingeniously simple combination of the base and wheels of a remote control car and foam boards. Due to the irregularity of the floor its wobbly progression prompted the momentary thought that there may be an illegal migrant worker hidden under. The theme of migration is somewhere in the folds of the dozens of festival left-over tents that Angela Fulcher has sewn together and hung on fishing lines under the ceiling for Hurry on Sundown. The fabric covers the ceiling in colourful volutes and cascades on the sides, transforming the gallery into a nomadic space, it incidentally points to the precarious status of spaces like the Niland’s.

All too often thematic exhibitions either impose a theoretical frame reducing artworks to illustrations or propose the most superficial commonality as an excuse for the show. But when the theme ‘works’ as it does most definitely here, it unfolds new potentials. In Hammer and Feather, words, ideas, artworks and spatial features interplay with each other creating series of contrasts, associations, counterpoints and repetitions as so many movements to an enthralling score.

Hammer and Feather – Experiments in Space